I am always reticent about recommending power products such as power cords and power conditioners. Their effects in my own environment vary greatly with different equipment and even with the time of day. Many components’ basic characters can change dramatically with different cords and conditioners, while with some other components, the differences are small or negligible.

One of the claims made by the makers of almost every cord or conditioner is a reduction in RF (radio frequency) noise that is allowed to pass. I connected a 50 MHz dual-trace oscilloscope to the power line coming out of my dedicated 20 amp listening room outlets and also to the output of the two power conditioners auditioned for this comparison. My suburban neighborhood has buried power lines which are less susceptible to picking up RF than power lines hanging high on poles, acting as huge antennae. Even so, there is a lot (relative term) of garbage coming through on the power line, but the amount varies significantly depending on the time of day. Late at night, say after 11 p.m., the quality of the 60 Hz AC power is pretty clean and much cleaner than what comes through in mid-afternoon. This is especially true in the summer, when the hot afternoons see thousands of air-conditioners adding huge demands – and noise – to the power grid.

I used the excellent Conrad Johnson Premier 15 Series 2 phono preamplifier as the base component for this comparison for several reasons. First, it remained in my system throughout the evaluation period, which lasted about a year. Second, it has very high resolution which allowed any changes to be clearly heard. And third, any differences should be more obvious due to its 75 dB of gain, which is a voltage amplification factor of over 3000 times (Buchsbaum’s Complete Handbook of Practical Electronic Reference Data, 2nd Edition, 1978, page 5).

Before we get down to business, let me share an experience with you. I have a spare power cord which is the type supplied with BAT and ARC gear. It is a standard Belden-type 14 gauge grounded cord with molded connectors. It sounds generally mediocre: a loss of harmonic resolution across the frequency range with a somewhat thin and strident upper range. In an attempt to cure the latter, I attached a snap-on ferrite core, about 1.5” long, near the IEC end of the power cord. I have used this same ferrite on a few large-gauge DIY cables with excellent results. But with this particular power cord, the change in the sound was unexpectedly large. The bass became loose and billowy and lost significant detail, and the treble was just about gone! The sound was very dark with very little shimmer or air in the upper frequencies. The change was obvious and dramatic. The moral to this little tale is that there will probably be a change with any power product, but you never know what you will get until you try it yourself, in your system. 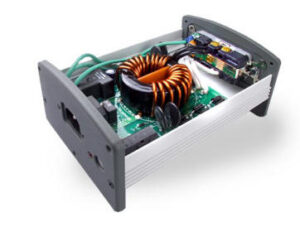 The PS Audio Ultimate Outlet High-Current lists for $399, features PS Audio’s Power Port AC outlet, and uses a Balun transformer as the main ingredient. Please see PS Audio’s Web site for more on this technology. It is real and effective. As you can see from the image, the UO also includes other component parts that undoubtedly contribute to the final result. This is a finely engineered product.

The Shunyata Hydra 2 lists for a hundred dollars more than the UO and features cryogenic treatment, a 4 stage “Venom” filter (you have to love marketing hyperbole!), no ferrous metals, and “NextGen thermally protected TMOVs”. The TMOVs are those little red disks you may have seen that offer spike protection. The newer TMOV devices are an improvement over the older MOV (metal-oxide varistors) in that they can handle repeated spikes. Old varistors were pretty much “one-shot”: one spike and they are useless. These cheap devices are common in the inexpensive power strips that many people use for their computers. BEWARE: Your delicate microprocessors are probably NOT protected from very common and damaging power line spikes. Replace that old strip with a good, computer grade surge protector ASAP! How much is your data worth? 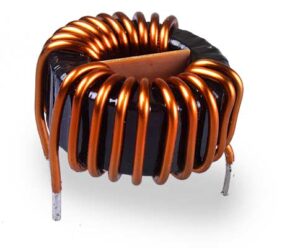 The Hydra 2 is not easy to get inside to see the parts, but I opened up two different Hydra 4 models. The TMOVs are made by Littlefuse and cost $1.61 each at Mouser. The Hydra 4 is advertised as having a 7 element Venom filter, but I found a TMOV, a block filter on the IEC inlet on the later production Hydra 4; the earlier model did not have this part, and one block filter on each of the two AC outlets. I’m not sure how those parts total a “7 element” filter. More on this in the upcoming “DIY Hydra” project.

To listening. About time!

The Ultimate Outlet arrived first and it made a positive impression. There was a very small reduction in upper frequency grain and a larger increase in the size of the sound stage. It was easier to hear individual musicians on the stage, and instruments, particularly strings, had more depth and body with the UO connected. I was not expecting the addition of the UO to affect the overall sound quality to the degree that a major component upgrade would, and I was not surprised that the resulting change was small. It was positive, nevertheless. My reaction was that for the price of the UO, it will stay in place. 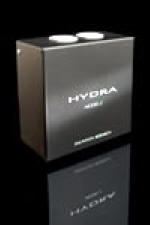 The Hydra 2 arrived about a month later. One of the tests I used for both conditioners was to select the CJ phono and turn up the volume control on the preamp. The tonearm remained in the arm rest and the platter was not turning. Seated on the listening sofa, I would use the preamp’s remote control and turn up the volume until I heard the background noise of the phono section. With the UO, the noise threshold was below the volume settings at which I normally listen, meaning that some noise was always part of the music. But with the Hydra, I had to turn up the volume to a much higher setting than I normally use for listening before I heard any background noise. The UO reduced the amount of background noise I heard versus no power conditioning, but for all practical purposes, the Hydra eliminated it! With the Hydra, the CJ phono preamp became effectively dead silent. There was a large difference in this simple test, and the Hydra won easily.

There is no free lunch, as the saying goes. The Hydra had another effect that was noticeable, but whether it is positive or negative will be wholly dependent on your system and tastes. Yes, it removed a lot of noise from the system, but also gave a small reduction in upper-frequency sparkle and air and a small loss of leading edge definition in the upper midrange and treble. Good or bad? I can not definitively say. With some components or cables (speaker and interconnects), the UO’s slightly “faster” or more open presentation was preferred, and likewise, the Hydra was preferred with other gear. For example, I enjoyed the UO more when I installed a Conrad Johnson MV-55 amplifier, and the Hydra more with an Ayre V-5x or Conrad Johnson Premier 350 amp.

Speaking of amplifiers, I almost always preferred power amplifiers plugged directly into the wall than into the Hydra or UO, feeling that the sound was more dynamic and with tighter, higher resolution bass without the conditioners. Using the UO with power amplifiers, in my environment, usually made a very little difference. The difference that was audible was a very small reduction in high frequency hash and grain, at the cost of just a bit of dynamics, but the degree of negative effect was usually VERY small. The Hydra’s dynamic penalty was slightly less than the UO’s. Overall, I preferred to use the Hydra over the UO with power amplifiers, but only during noisy power times.

My final long term, leave-it-alone-and-just-listen preference in my environment was with the Hydra powering all of the front-end components, including the Kuzma Stabi Reference turntable’s power supply, and the power amplifier(s) plugged directly into the wall.

Let’s talk about video for a moment or two, since these conditioners are recommended by their manufacturers for use in the home theater, too. My HT system is modest. I have a Pioneer Elite DTS/THX 5.1 receiver with front speakers from the Dynaudio Audience line, while the rear speakers are the small but mighty B&W Leisure 1s. The system includes two DIY subwoofers based on Perfect Subwoofers, but with smaller enclosures (Q=.7) and different plate amps. I tested the power conditioners with a Sony Wega 32XBR450 32” HD capable CRT television. The source was a Toshiba DVD player spinning the Video Essentials test DVD. The TV is normally plugged into a Tripp-Lite Isobar 4 power strip that includes noise, surge and spike protection in multiple L-C filters. TV signals are via Comcast cable.

With the Hydra, I saw a very small increase in color saturation, mostly in the blue range. Very small. On a direct A/B against the Tripp-Lite, I slightly preferred the video quality with the Hydra installed, but the picture was very good without it. My conclusion was that it is not worth the cost for the very small increase, which could easily be dialed-in with the Color control on the TV.

The Ultimate Outlet made a larger difference. Color saturation improved across the entire color range, but again, this could be effectively equaled by increasing the Color control slightly. The biggest improvement was noticeable on regular broadcasts. In an image that included a light colored background, the UO reduced the amount of grain and presented a much smoother, more homogeneous background. The Hydra did not reduce this background noise to anywhere near this degree. The Tripp-Lite Isobar was almost as good as the UO.

Going back to my opening comments, power quality varies greatly in different settings. The biggest improvement in power-related audio quality was simply to listen after midnight, when there was the cleanest power resulting in the blackest backgrounds, inside and out! But since my sleepy-time is usually before then, power conditioning has become a necessary part of both my audio and video systems. My recommendation is to try at least two different power conditioning products in your system and pick the better one. Repeat until satisfied. Happy Listening!