During the preparation for this review, I kept thinking about the theme of the Disney movie “Aladdin”: a diamond in the rough. Here at 10 Audio, we’re always looking for products that offer excellent value for the money in addition to offering outstanding sound. So the “rough” would refer to the price category of these beautifully finished speakers: $1600 with stands.

While I would not consider products in this price range to be in the “budget” category, there are many examples of speakers around this price that offer above-average performance. The Proac Response 1SC and Merlin TSM are good examples. We all look for those rare components that break the price-performance barrier. I hoped the Leisure 2 SE would destroy this barrier. Kellsie AV Designs, the US distributor, was very helpful in bringing in the speakers for the review.

The “diamond” would refer to an outstanding loudspeaker. All the ingredients are there:

As we learned in basic economics, the lower the price of something, the greater the number of people who can buy it. So we were looking at the Leisure 2 SE as a potential “speaker for the masses”. Let’s see if the Leisure 2SE fits that description.

The 2SEs make a fantastic first impression. They come triple-boxed! The speakers themselves are beautiful. The sides are real wood. The front, top, rear, and bottom are black. The whole box is piano lacquer finished. I wore the white cotton gloves that I use when working with vacuum tubes to protect the speakers’ finish during handling. The solid stands have a leather insert on the front and rear with a logo on one leather surface. You can choose to see the logo or not by turning the stands around. As one who removes the “Dockers” tag from above the rear pocket of his trousers, you can guess which orientation I preferred. The logo on one of the grilles was slightly crooked, but since all listening was done without the grilles in place, this was not a concern to me. On the other hand, I know one or two audiophiles who would not be so accepting.

Out of the box, the Aurum Cantus speakers sounded exactly as one would expect from a new speaker that needs some break-in time: limited dynamics, somewhat grainy and harsh sound, poor resolution, and a confused soundstage. This is entirely normal for new speakers (and most other components, too). As the hours accumulated the dynamic ability improved considerably, the grain vanished, the resolution became quite exceptional especially with the ribbon tweeter, and the soundstage cleared up nicely.

This is good, right? Did you happen to notice that I didn’t mention the harshness? As the bass, midrange and treble improved during the break-in period, it became increasingly apparent that there is a problem in the crossover region around 3 kHz. With a complex 3rd order crossover, we expect phase shift and other issues. Some manufacturers, such as Merlin, go to extraordinary lengths to address these unavoidable crossover effects with circuit designs and the quality of parts that redefine the state-of-the-art.

What I heard, and that bothered me more than it did another listener, was some harshness around the crossover point of 3 kHz. In an effort to understand this anomaly, I used a sine wave signal generator and ran sweep tones from 100 Hz up to the ultrasonic into both speakers. An annoying distortion was audible from 2650 to 3300 Hz, with peaks at about 2750 and 3100 Hz. As you can read in the Fostex and AER speaker projects elsewhere on 10 Audio, there were also distortions observed, but at different frequencies. Again, this bothered me more than it bothered another listener, although he heard it, too.

My current listening room was built for music with carpeted concrete floor, double-layer 5/8″ drywall walls and ceiling mounted with Z-channel, solid-core doors, acoustically treated air vents, and dedicated 20 amp power. There are 2 x 4 foot panels of acoustic foam strategically placed on the walls and especially the side speaker reflection points. It is a relatively small L-shaped room at 19 x 12 x 7 ½ feet, and I listen across the 12’ length. As such, I am only about 7 or 8 feet from the plane of the 2 speakers. So we’re not talking about requiring a speaker to fill a large space with sound or to handle a lot of power.

Over the last few years we have come to expect that small speakers are able to get into the low 40 Hz range with good proficiency and the 2SEs do this, too. When playing music at a level that makes conversation easy, but somewhat louder than background music, the 2SEs have very good bass quality and quantity, along with a midrange that while not quite as transparent as the excellent ribbon-produced treble, is quite acceptable. When I turned up the volume to more normal listening levels in the low to mid 90 dB SPL range at the listening seat, I received a lesson in the reality of loudspeaker design, and physics!

At this level of output, the speakers are being driven with about 1/4 to 1/2 of their 100 watt rated input power. The 5.25” driver, delivering moderately loud bass and extending its response into the treble range of 3 kHz, is apparently being asked to do too much. As the volume increased, the previously very precise midrange became confused. The formerly excellent soundstage flattened and the individual performers melted into each other. (I could tell that they were quite unhappy about this.) My listening notes included the comment “severe intermodulation distortion when played loud”. My memory of the similarly sized Proac Response 1SC includes no such anomaly.

Since I have a pair of powered subs, I tried an experiment to verify this. I literally “put a sock in it”. The port, that is! I thought that by limiting the woofer cone’s travel by converting the enclosure to a sealed box, the IM distortion would be reduced. This assumption was correct, and the quality of the midrange improved dramatically when playing relatively loudly. With the port blocked off, and with the subs adjusted for a low pass crossover point of about 100 Hz, the 2SE provided the upper frequencies of an excellent full-range system (except as noted above).

At this point in the audition, it was obvious that the 2SEs were not going to do well in the Olympics of Audio and I returned the speakers to the distributor. They commented, “The speakers are within specs. The measurements again show unmeasurable distorsion and well balance through out frequency range.”

Which just goes to prove: YMMV (your mileage may vary). The Leisure 2 SEs did not win the day in the 10 Audio arena, but they could do better in yours. Our search for the “diamond in the rough” continues. 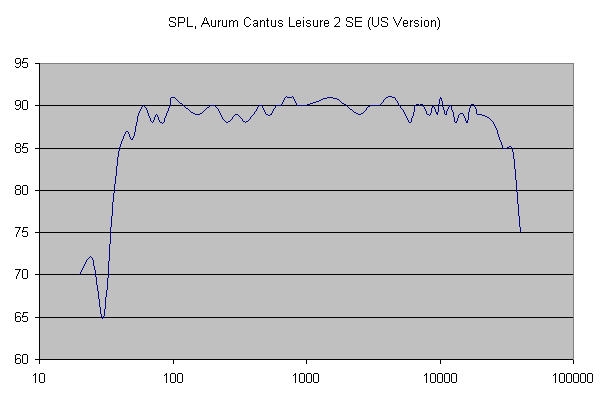