The Adcom GFA-555 stereo power amplifier has a long history. The original version was introduced in March, 1985. Designed by Nelson Pass, the amplifier weighed 30 pounds and cost about $680. The newer SE version is a redesigned amplifier that weighs 36 pounds and carries a list price of $1299. Adcom retained the styling of the original model, so look closely and you will see “model GFA-555se” above the power switch on the front panel. 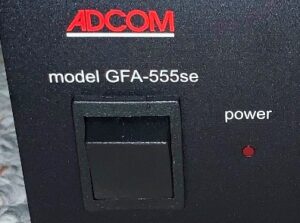 The distortion figures are markedly improved over the original GFA-555 model which was known for low distortion, and which I owned. Overall distortion has been reduced from 0.04% to 0.003%, and signal-to-noise ratio has been increased from 101.5 dB (1 Watt) to over 110 dB at 200 Watts. Even though the amplifier is still rated at 200 Watts per channel, the new amplifier’s specs include distortion and other specs for 300 Watts per channel into 4 Ohms, and 600 Watts in bridged mono operation. The owner’s manual is very complete and informative, and is printed on high quality, heavy paper. The output stage transistors are Motorola MJ-15022/15023, 4 pairs per channel.

The original GFA-555 was a landmark product when it was introduced, and the new SE model continues to be a good example in its price class. The overall sound defines the minimum quality to enable the amplifier to be included in a discussion of today’s crop of high quality, value-oriented power amplifiers. 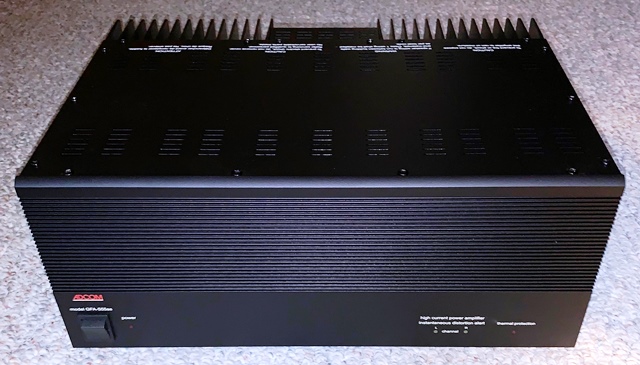 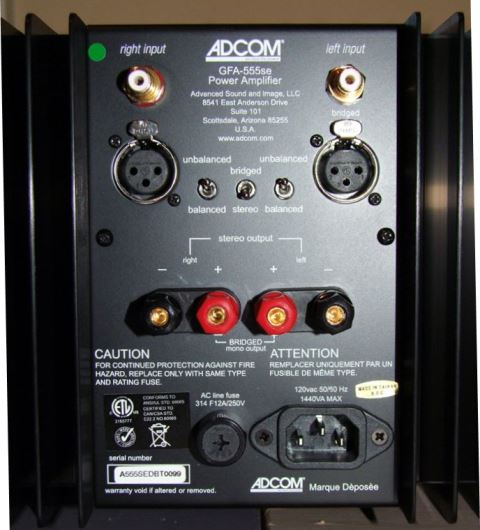 The overall audio balance or character is old-school tube-like with light-weight bass and diminished detail in the upper treble. Harmonic trails seem abbreviated as they fade into silence more quickly than with the higher performance amplifiers on hand. Because of this balance, the listener’s focus is on the midrange which helps singers, both male and female, to take center stage. Even so, glare or momentary harshness in recordings is exaggerated to a small degree.

On “John Cougar, John Deere, John 3:16”, Keith Urban’s voice has less lower-midrange power and presence than is apparent in the upper midrange. The upper midrange quality is excellent, and a bit forward which helps the understanding of words and highlights some singers. This character makes the Adcom amplifier well-suited to home theater applications.

The Adcom amplifier’s bass quality is more of the “rolling thunder” variety, making it difficult to hear individual bass strings vibrating. The $4495 Cary SA-200.2 ES and $2999 Benchmark AHB2 amplifiers far outperform the Adcom in the bass, being much more resolved and linear into the deepest bass. The 12 Watt single-ended Valvet amplifier also has greater resolution down low, although it does not offer a challenge to the macro dynamic prowess of the Adcom’s 300 Watts. The Magicos are 4 Ohm speakers.

The GFA-555se offers excellent dynamic performance. One can clearly appreciate the pop or attack when a drum stick hits the snare or hear a rim shot. Low level dynamics, the quiet shifting of intensity of a voice, or the way Brad Paisley changes the force with which he plucks almost every guitar string, is apparent and enjoyable.

Imaging and sound-staging are both good, with a recognizable center image. There is a nice sense of depth to the stage. Laterally, the image is a continuous sound field between the speakers with good left-to-right differentiation. The individual singers in “Homeless” on Paul Simon’s Graceland album form a continuous line just behind Mr. Simon, rather than the arc of individual singers placed well behind him on the stage that is presented by the Valvet E2 SE amplifier. The sense of air and ambience is reduced, but this area of performance improved markedly when the amplifier is well broken-in. Allow 60 minutes warm up to reach optimum performance. 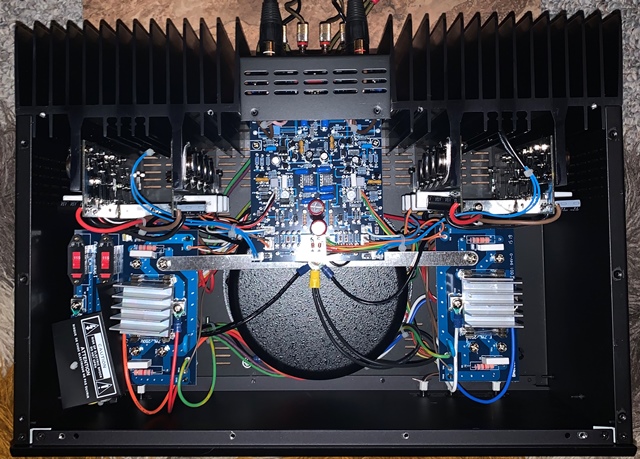 The Adcom amplifier performed well with the Focal Chorus 714 speakers, but had its unique signature clearly revealed by the extreme resolution of the Magico speakers. This is no surprise as the latter are quick to showcase any deviations in upstream components. Even so, with the Magico speakers, the sound was dynamic and had nice performance with a near-absence of high frequency anomalies. The Adcom bettered the $8950 Ayre amplifier in this regard, but was on a very different level than the super-pure sounding Valvet or Benchmark amps. The Wyred 4 Sound ST-750LE or Prologue tube amp would be an upgrade. The best way to address this is to use care in system matching.

The Adcom amplifier will not be mistaken for a tube amp with the signature midrange harmonic depth that vacuum tube lovers take for granted. The Adcom amp moves that focus to the upper midrange, which is the amplifier’s area of highest performance. A prospective buyer might compare this amplifier to the latest crop of “digital” amps from Wyred 4 Sound, Rotel, and others. A preference will emerge in short order.

The Adcom GFA-555se is enjoyable for longer listening sessions with well-recorded material. It could be killer in a home theater system, with powered subwoofer(s) and DSP for good in-room response. While it does not provide the level of involvement or immersion in the music as some higher performance amplifiers, the asking price seems appropriate in this very competitive level. The Adcom GFA-555se is not a “giant killer”, just a reliable music maker.