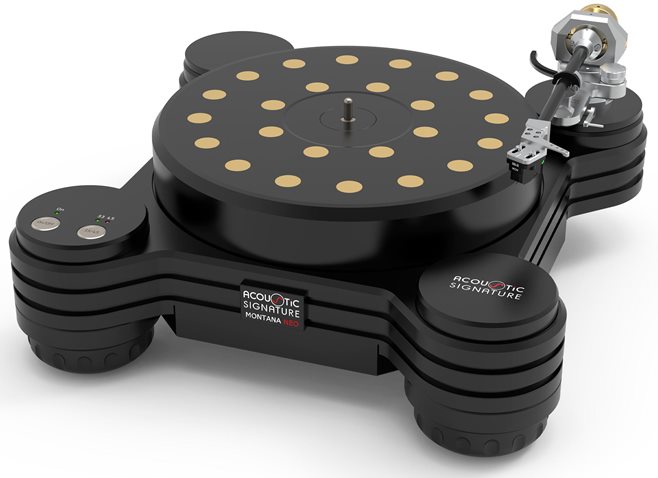 Offering all of the technologies of the top-of-the-line $189,995 Acoustic Signature Invictus Neo turntable, the new $30,995 Montana Neo turntable is a sight to behold. Weighing a substantial 81.6 pounds (37 kg) with a 28.9-pound platter, the new Montana Neo is a serious turntable for dedicated audiophiles to enjoy for a lifetime.

The Montana Neo turntable includes 3 integrated AC-motors driven by an external controller with AS’s proprietary Anti-Vibration Control AVC-system Level 3, the same level of control offered on the Invictus Neo. This technology constantly monitors each motor and instantly applies precise phase adjustments to minimize the internal vibrations that all motors have. The speed can be manually adjusted for each speed of 33.3 RPM and for 45 RPM. This model will accommodate 2 tonearms, 9″ and 12″, by using the built-in extendable arm pods. Incorporating Constrained Layer Damping to minimize mechanical vibration in the entire turntable assembly, and the proprietary Duraturn Diamond Bearing used in all Neo models, the Montana Neo is built to play!

Set up of a Montana Neo is straight forward. There are 3 belts that are installed after the sub-platter and before the heavy platter is installed. Each belt is fitted over 2 motor pullies and the sub-platter. A pictorial guide is included in the informative user manual. Watch your fingers as the 29-pound platter is gently lowered into place because the machining is so precise that the platter has little clearance to the plinth! The easily removable armboard, which is a snug fit that is secured with one accessible set screw, makes the initial tonearm mounting a simple task. 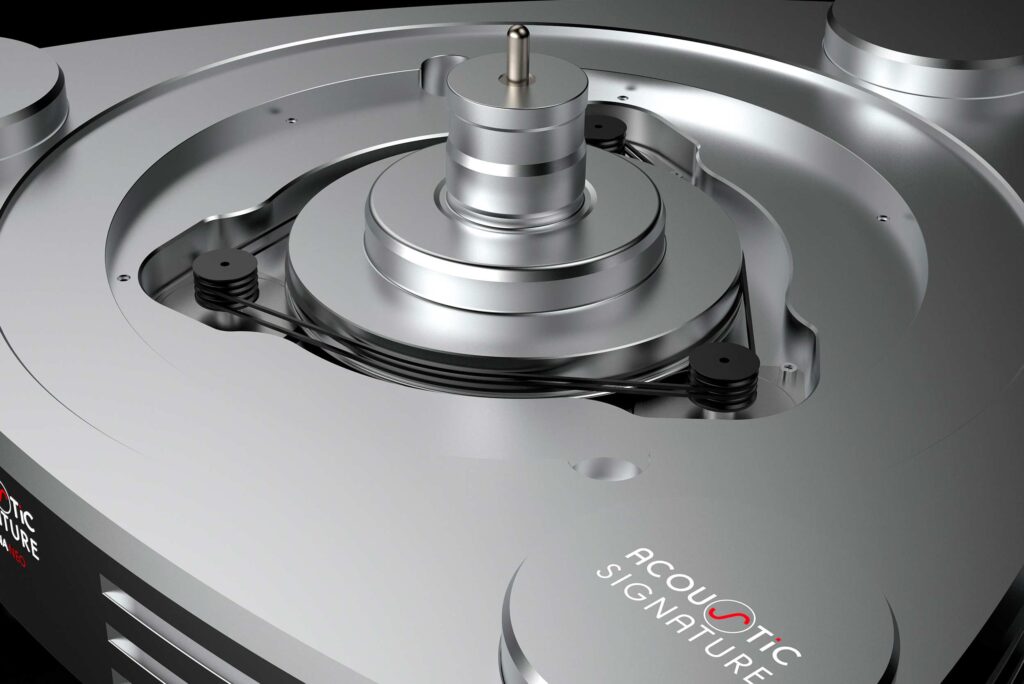 The included platter mat is die cut to perfectly expose the 24 polished brass platter “Silencers”. The “factory mat” performed roughly equally with the excellent Origin Live mat, so I went for the visual appeal of the Montana mat. There was a curious issue when the table was brand new. The 3 motors seemed to be making a strange, pulsing noise. We tried a different motor and different motor controller. No joy. The odd sound disappeared after a couple of days as mysteriously as it had landed, never to return. The turntable is silent in operation. Please be patient during the 40 second start up until the flashing speed indicator turns solid green, indicating that the platter has reached the set speed and the speed is locked by the motor controller.

The Montana Neo offers rock-steady speed stability and what sounds like a significant reduction in distortion. The results of these two traits are a continuity and purity of tone and harmonic content, and truly black/silent backgrounds. The latter is a large contributor to a huge, precisely defined sound stage. 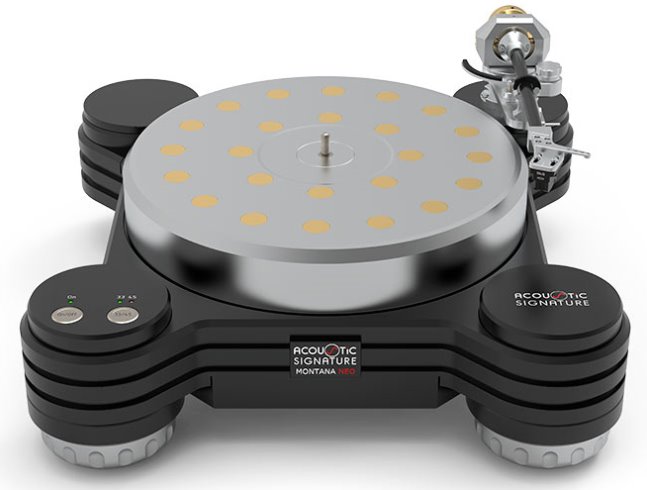 The entire sonic presentation is detailed, 3-dimensional, and consistent. Every sound has a solidity and dynamic forcefulness that mimics life. This is not a perception that one or more veils has been deleted, but instead, that a direct connection to the recording microphone has been locked in. Where lesser turntables have noticeable differences – a little more of this, a little less of that – the Montana Neo raises the bar in every parameter for a significant system upgrade for all types of music. Just as the Origin Live tonearm expands the performance envelope of the Clearaudio turntable, the Montana Neo upgrades the sonic potential of the Origin Live tonearm. The combination of the Montana Neo turntable, Origin Live Agile tonearm and ZYX UNIverse Optimum moving-coil phono cartridge is stunning! The AS TA-7000 NEO tonearm arrived late in the audition and will be covered in a future article. Initial impressions are positive.

Picking apart the very deep and powerful bass, rich and human-sounding midrange, and the very extended and high-resolution upper frequencies would add a lot of words to this review, but reveal little about the outstanding cohesiveness of the entire audible sound spectrum. The pure continuity of the ‘table is remarkable. The Montana Neo does not seem to favor any small frequency range, but meets this reviewer’s long-standing requirement that a reference-level component offers perfect linearity and consistent resolution from lowest bass to extreme treble.

Listen to this oldie-but-a-goodie: “Draw of the Cards” from Kim Carnes 1981 Mistaken Identity LP. The huge dynamics, great spatial effects that fill the listening room, and solid foundation in the lower registers is a lot of fun. For best system performance, this cut must be played LOUD. At least, that’s what I tell my S.O.

Michael Jackson’s “Human Nature” from the Thriller LP (also This is It LP) displays exceptional octave-to-octave consistency and outstanding harmonic resolution. Michael’s voice is purely human and provides a near virtual reality experience. Actually, you can omit the word “near” from the previous sentence. The Montana Neo gets this listener closer to being in the same acoustic space with the live performance than any other record spinner in memory. Before the Montana Neo, tables from Basis, Clearaudio, VPI, SOTA, Well Tempered, Holbo, and Kuzma, very good all, had extended visits. 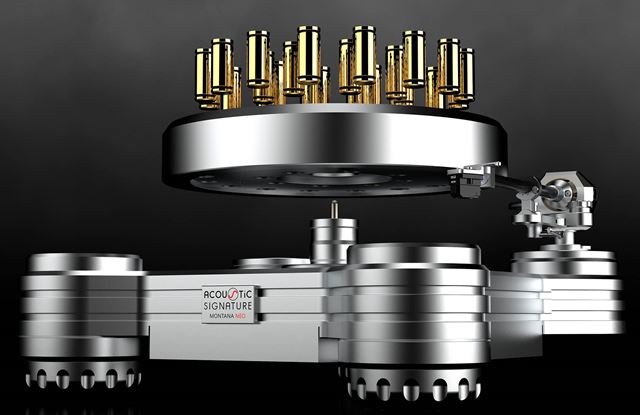 “Mystified” from Fleetwood Mac’s Tango in the Night LP demonstrates the remarkably clear window into each performer’s contribution that is presented by the Montana Neo. Really, every well recorded record instantly becomes an “Original Master Recording” in sonic quality, as evidenced by exquisitely high resolution and a silent background with no noise.

The differences compared to the Clearaudio Ovation were mostly not the “knock you upside the head” immediately noticeable upgrade. Mostly. But after a few records on the Acoustic Signature table, going back to the 3.5 times less costly Clearaudio Ovation provided indisputable evidence that you can, indeed, get more for your money. But let me state unequivocally that during the 2 year residence of the Clearaudio Ovation turntable, a LOT of musical enjoyment was had in my listening room.

Component reviews have a definite purpose: To let you know about components that are worth your time to investigate further, maybe as potential purchases. Of course, reviews can also help to steer you away from products that have been found to be unworthy for one reason or another. We fearlessly post negative comments when warranted to alert you to those products that we feel are not worth your time or will probably not provide long-term satisfaction.

The Acoustic Signature Montana Neo turntable most definitely falls into the category “Worth Your Time”. This outstanding performer offers the special technologies in Acoustic Signature’s most advanced products in a beautifully finished, compact package. Listening to the wonderful transparency of the Montana Neo leaves this listener wanting for nothing. This is a great turntable offering the sound quality and performance that satisfies a decades-long pursuit.

This review would not have been possible without the very kind support of Norm Steinke and Rob Niemann at Rutherford Audio, the US distributor. Technical support from the manufacturer, Gunther Frohnhoefer, was kindly offered and received. Thank you!