The Audio Research Corporation LS22 Line Stage Preamplifier was chosen for this upgrade project because it has a lot of features and a lot of potential. The features that make it attractive are:

• The option of either balanced XLR or unbalanced RCA connections for all inputs and the two sets of outputs.
• It has a hard wired power cord that many say gives better performance than using a special power cord with extra connections. (see below for Update.)
• It is out of production. The acquisition cost was low.
• It has a simple signal path and a large, easily accessible circuit board.
• The circuit board is of high quality and has heavy and wide traces. This helps with modifications because less damage to the traces is likely to occur when removing components such as capacitors or when soldering in new parts.
• The LS22 was the last ARC line stage to be pure tube in the audio signal path, use a normal volume control, and 6922 tubes. The succeeding model, the LS25, included the new and annoying switch-thing “what the @#$% were they thinking?” volume control. The highly rated LS25 mk. 2 (reviewed here on 10 Audio) used 6H30 tubes, tubes which I have rarely found to be as true to the heart of music’s emotion as the good old 6922/6DJ8 family of vacuum tubes.

Here is the list of upgrades that will be performed in stages to gauge the effect of each one on the overall sonic performance. Parts sources are listed below.

Replacing the horrible sounding Sovtek tubes with, well almost anything would be an improvement, but in this case the very musical Tesla 7DJ8, erased a large amount of harshness and grain and increased midrange richness, bass control and resolution, and proper high frequencies, all without any penalties. The stock feet are a semi-hard rubber and replacing them with the softer Isodamp feet resulted in a very small change, but maybe not necessarily an improvement in the overall sound which became just a bit less forward. A simple matter of perspective and personal preference, certainly. I am planning to leave the Isodamp feet installed.

And now we come to the part of the upgrade project requiring technical skill, finesse, and talent. But I am going to proceed anyway. It was a straightforward task to remove the twelve 5uF capacitors from the circuit board. (These are the big white ones on the right side – near the tubes – in the image of the stock LS22 interior below. Four are mounted on the underside of the circuit board and are not visible in the image. The smaller white ones next to them are the .01uF bypasses.) Removing/demolition is always easier and requires less skill than installing, don’t you know. Also removed were the eight .01uF capacitors. I am not a proponent of using bypass capacitors in the audio path. Why? In my experience, they do more harm than good and are unnecessary when using good quality capacitors. The larger value capacitor passes all audio frequencies above its cutoff frequency, including all frequencies which would be passed by a smaller value bypass capacitor. More capacitance = lower cutoff frequency. There is no need to “pass it again”. The addition of the bypass cap adds sonically discordant phase shift at the bypass’s cutoff frequency. This is not “air”. 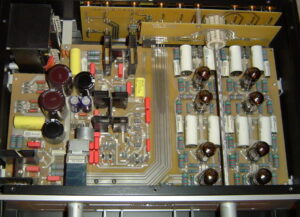 Let’s put down the soldering iron for a moment and discuss replacing the audio stage capacitors. Looking at the Audio Stage schematic (or use link below), we can see that C1 and C2 are listed as 5uF parts. With the very kind and able technical assistance of Audience A/V, it was decided that this value could be decreased from 5uF to as low as .33uF without any harm to bass performance. I was leery of making such a drastic change, so I arbitrarily chose a replacement value of .68uF. (These .68uF caps were replaced later in the project with 1uF 200V Aura-T Teflon® caps from Audience. Please see below.) The gurus at Audience A/V also suggested that the double 5uF caps on the outputs (C5 and C7, and C6 and C8) were unnecessary and that a single 5uF cap could be used instead. The positions for C7 and C8 were left with no capacitor installed. Again, the .01uF bypasses, which include C3, C4, C9 and C10, plus four more caps for the other channel, were removed but not replaced. The stranded leads of the replacement 5uF Auricaps are a larger gauge than the stock caps’ leads, so I took out my Dremel and enlarged the holes in the circuit board. The nice wide circuit board traces that are standard in Audio Research products made this task very easy and stress-free.

Next up was replacing twelve power supply diodes with the Fairchild Stealth II parts listed below. What’s the big deal with diodes anyway? I’m glad you asked. They add noise to the circuit when they are switched on and off by the incoming AC sine wave. They do this because they are slow to recover from being turned on and off. To say it another way, their switching action is not a clean “Now I’m ON…Now I’m OFF“. There is a brief period of time during the on-off change when a diode is not quite on or not quite off. This confusion during the change injects noise into the power supply circuit. Any noise in the power supply is added to your music. (Pause for effect.) The stock 5 cent 1N4006 diode and the 18 cent 1N5400 diode are 10 times slower to recover than the Stealth II parts, where “Fast-Recovery” is the name of the game. I used the same Fairchild part number to replace the eight 1N4006 and the four 1N5400 diodes.

Sonic results checkpoint. Replacing the Sovtek tubes made a big difference in the reduction of harshness and unnatural edge. Replacing the audio path caps with Auricaps effectively eliminated a layer of haze or fog that was present on all music and at all frequencies to the point where it was no longer bothersome or even noticeable. The Auricaps provide a much greater feeling of having a direct connection with the music. The magnitude of improvement offered by the fast-recovery diodes was surprising. I thought that since the power supply was well filtered and further rectified and regulated (U3, U4, U5), replacing the diodes would have a minor effect. Wrong! The sense of increased transparency and clarity in the midrange, obviously finer low level resolution in the entire treble range, and a more relaxed sound was noticed immediately. 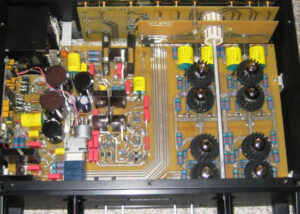 Rating the relative benefit of the three mods performed so far, the tube replacement would be number 1, and the diode and capacitor upgrades fairly evenly tied for number 2. The relative improvement from the better diodes and capacitors was pretty close, but I think that the diodes may just slightly edge out the caps in the increase in listening enjoyment. However, I would definitely want both upgrades and consider neither to be optional for this purpose. Overall result so far: The stock unit definitely needed help. The mods performed to this point have transformed the LS22 into an excellent sounding preamplifier. The level of background or tube noise is inaudible with the volume control at 3:00 and my ear to the speaker. At this point, I think I would be very happy listening to this preamplifier for quite a long time and could cancel the remaining modifications. But you and I both know that won’t happen.

Fast forward four months. The image to the right is the final preamplifier with the Aura-T Teflon® capacitors installed. Yes, they are there! There was limited room to install the 1uF 200V caps in between the tubes, and not enough room for the caps and also the Pearl Tube Coolers. So what to do? I installed them on the underside of the P.C. board! The image also shows the Fairchild diodes on the far left next to the vertically-mounted P.C. board used for the remote control functions. The Audience capacitors are easily identified by their yellow color. The image below shows the underside of the preamplifier with the four big black Aura-T capacitors on the left and two standard Auricaps on the right. The latter are in the power supply.

I just today (22 March) installed the Aura-T capacitors after a 500 hour break in period using a sweep generator. I will update this project soon with the sonic contribution of the new Aura-T capacitors. The initial impression of the sound with these new capacitors is extremely positive.

Update, 1 June. The Aura-T capacitors will never be replaced! These are exotic dancers of the Kingdom of Audio, removing well-known veils to enable the listener to hear far deeper into every note than was ever possible, even compared to the exceptionally transparent Placette Passive Line Stage. The improvements are noticeable throughout the frequency range, but especially in the upper midrange and treble where a higher level of information has been revealed. Voices are more present in the room. Percussion instruments have a “striking” immediacy that obviously narrows the differences between live and recorded music. 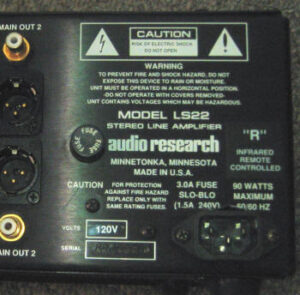 I changed the plan for the power cord. The area to install the Audience PowerChord ‘e’, or any other specialty cord, for that matter, was just too small to enable a comfortable fit. Instead, I installed a standard IEC socket, a two hour task aided by a high-speed rotating saw. This required that the fuse holder be repositioned. Using a standard Audience PowerChord ‘e’, let me share with you my utter satisfaction with this series of modifications. In the months ahead, I plan to bring in some other preamps for comparison. For now, critical listening has revealed no flaws. The bass is deep and powerful through either the Manley Neo-Classic 250 or Pass X250.5 amplifiers, although somewhat different with each amplifier. The midrange presence is quite special, and often startling. The highs are pure, extended, and attain a level of inner resolution that enable every recording to present new information. Most importantly, the presentation is perfectly neutral from low bass to beyond hearing with no sense that any part of the frequency range is different from any other part of the range. They are all excellent.

In closing this project, let me urge anyone else who may be thinking about modifications of this type to go ahead. Besides being a fun project that offers continuous rewards, component upgrades can often provide sound quality that rivals far more expensive components for a more modest investment.

Have fun, and happy listening. 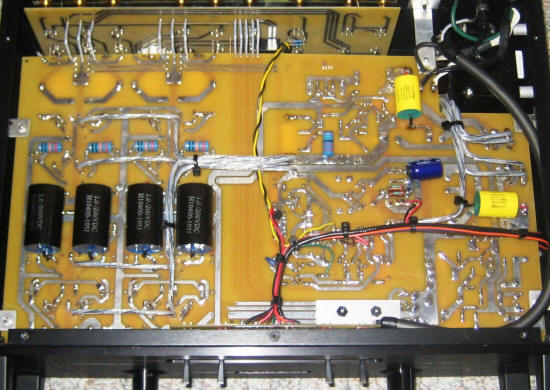