I installed the Audio Research PH5 phono preamplifier and let it warm up for 24 hours before listening. It had been used for several months and was well broken-in before I received it. One of the first things I did was to play with remote control of load impedance settings, a very welcome feature. Different loadings were clearly audible and being able to make these changes from the listening seat made finding the optimum load setting quick and easy. The final preferred loadings were exactly what I had been using with my standard reference phono stage, a Conrad Johnson Premier 15 Series 2 with Jensen transformers. 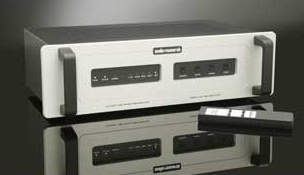 In one of those rare instances of perfect synergy, the gain of the PH5, my amplifiers – the exceptional Cary 500MB, the efficiency of my speakers, and my preferred listening level allowed me to plug the PH5 directly into the amplifiers. No preamp! In this setup, the mute button on the remote control was used regularly, as you can probably imagine. I did not try other than the stock tubes, which I verified with my calibrated tube tester to be “as new”. The sound qualities I discuss below did not change significantly if the PH5 was connected directly to the power amplifiers or through the extraordinarily transparent Placette Passive Line Stage. This can be considered as another bypass test verifying the near-perfect transparency of the Placette.

Something is missing, and this “something” will be a critical omission for most listeners, and irrelevant for some listeners. If you listen to top-40 rap, punk, grime, nu skool, aggrotech, gabba, speedcore, acid techno or similar sounds (I hesitate to call most of this disharmonious commercial product “music”), then the ARC PH5 may well meet your needs (1). The PH5 gets the large-scale dynamics and presents them with unforced clarity. However, it is quickly apparent that all of the low level information, which is commonly called micro-dynamics, is flattened or compressed. The subtle intonations that provide the feelings of emotion and excitement are largely absent. The PH5 has very good low-level resolution and very little information is actually missing, just compressed. The result is that music containing micro-dynamic content, all music, is boring and uninvolving.

The lateral soundstage is excellent and performers occupy a precise left-to-right location. Individual singers have acceptable 3-dimensional forms. Listening to well-recorded classical music, there is a noticeable lack of soundstage depth and it is not possible to get a convincing sense of the size of the recording venue: a studio sounds similar to a large concert hall.

On the plus side, complex music is handled just an clearly as simple arrangements. The bass range is outstanding, having excellent speed and leading-edge detail and is generally superior to the Premier 15. Frequency response across the audio range is even, with no highlighting of any particular range such as upper bass or midrange or treble. The PH5 reminds me of the Sonic Frontiers Phono 1SE, although the latter was not available for direct comparison. The Phono 1SE’s memorable trait of having some of the typically lean solid-state character above middle-C is also present in the PH5, but to a lesser degree. Not threadbare, but I would not attempt to call it tube-like, either. The ARC unit is warmer and more fluid sounding in the upper registers than the Phono 1SE, if I remember correctly. And I do. I also remember enjoying the performance of the $2500 Cary PH302 much more than the performance of the unit under review here.

The PH5 has absolutely no trace of grain or hardness in the upper mids or treble, although a slight touch of glare could be heard with some recordings. This is probably attributable to the particular vinyl. The unit itself is effectively silent, and the sound it produces is likewise very low in background noise.

The $2000 PH5 appears to be well made but is very light in weight. Due to the light weight, I had to hold it down when removing or inserting the interconnects’ RCAs on the rear panel or it would slide across the supporting shelf. The shelf is a 48 pound slab of quarried sandstone that presumably has a high coefficient of friction. (Or not. I may have played hooky on that particular day of school.) The phono stage operated without any failure or strange noises during the audition period which lasted only a few weeks. Every time I plugged it in and listened to an album side, the music failed to hold my attention and I had a strong desire to reinstall the Premier 15. End of audition.

The PH5 is worth considering if your sonic tastes do not require the reproduction of subtlety and quiet emotion. For the rest of us, look elsewhere.

Note 1. OTOH, you are probably not part of the main target market for high-end analog music reproduction equipment.