An unexpected thing happened as a result of this review. I guess it was bound to happen sooner or later, but I didn’t expect it would be a turntable that was the catalyst. I was finally convinced that satisfaction from reproduced music has a tenuous connection to objective observations. 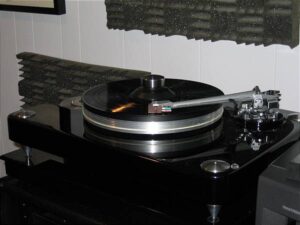 Almost every review you read here and elsewhere talks about music in terms of bass, midrange and treble, breaking the music into three or more parts and then describing the impact of the component under review on these parts. Of course, we all know that these divisions are used for clarity and to make the task of analysis easier and more explainable. The practice does help communicate the audible qualities, and I intend to use it here and in the future.

However (fasten your seat belt) there’s a catch. Music is not bass, midrange, or treble. It’s not soundstaging, transparency, tight bass, lack of “cardboard cutouts” (although I agree with the reference and have unreserved respect for the reviewer who used this term), or any one of a myriad other convenient classifications. As you can read on the Zen Page, it is about involvement, about connection, about joy. Music is about transporting the listener to another time and place, quite possibly it is an internal experience that is outside time and place. I often feel as though I’ve just returned from a nice holiday after a great listening session.

I enjoyed a Well Tempered Reference table (WTR) for about 10 years, and it gave excellent service. It never broke, made unusual noises, or required more that perfunctory adjustments. It also was not the highest resolution device available, having somewhat soft or ill-defined bass, a slightly sweet or tubey midrange, and highs that didn’t go out to dog-whistle frequencies but didn’t sound rolled off or limited in any objectionable way. However you measure it, though, the WTR was always exceptionally musical. I offer this as my point of reference.

The VPI Aries, an early 2002 production unit with the TNT V platter and bearing, was “armed” with a new SME V. The table was simple to set up, and the supplied armboard, already cut for the SME arm, made installing the arm an easy task. The adjustable cone-shaped feet made leveling the table very easy, too. The table sat on a 1 1/8 inch thick shelf of sandstone which weighs about 45 pounds (20.45 kg). I did not use the motor cover. The cover looked nice, but when I tapped on it with the needle resting on a stationary LP, I could hear it ring.

The SME V arm is a pleasure to use. The damped cueing requires just a touch on the lever to allow the arm to be gently lowered onto the record. There is no noticeable play to the Class 7 (best) bearings. The finish is perfect. The only time I had any issue with the arm was when a certain cartridge needed a VTA adjustment that had the arm lowered quite a lot in the rear. As the cartridge approached the end of the record, the tapered arm tube would hit the outside edge of the record. Warped disks made this much worse, causing the last cut to skip on every revolution. With any other cartridge, or more normal VTA settings, there were no problems with the arm at all.

Well one, actually. The supplied detachable tonearm cable is (now, how do I say this nicely?) recommended for replacement. You will never know how good the arm is with the supplied vdH D501 cables. As the story goes, van den Hul made these by request from SME, so please don’t assume that any other vdH cable sounds like this one. The stock cable was replaced early in the review process with Cardas 33×4 RCA and Window Special White balanced phono cables.

I’ve talked about the “bass system” in other reviews and postings, where your woofers and your room should be considered your “bass system”, since the interaction of the drivers and the room determine the quality and quantity of the bass you hear. It is equally important to consider the turntable and tonearm together when making any observations regarding LP playback. So when I mention “Aries” below, please keep in mind I am referring to the combination of the Aries and the SME V arm.

The Aries is better in every objective way than the WTR. The bass was tighter and better defined, although not really deeper or more powerful. The Aries presented a slightly more focused midrange, and noticeably more extended treble, with higher resolution across the audio band, but especially in the treble range. The improvements went from “small” – taking several hours to pinpoint the difference, to “large” – immediately apparent. It made a good first impression, one that was consistent over six months of use and several different cartridges and other system changes. The combination provided a good amount of listening pleasure which occasionally resulted in that “just back from holiday” sense of total immersion.

The Synchronous Drive System provides a pure 60 cycle sine wave to the Aries’ synchronous motor. Almost any power-related device such as power cord, filter, or power conditioner will give results that are dependent on the quality of power you already have in your room. The better your power, the less effect most of these devices will have.

Adding the SDS was interesting in my suburban location. The effect of the SDS varied from a very small, almost irrelevant change, to very worthwhile. There was a strong correlation to the improvements offered by the SDS to the time of day: afternoon or early evening = big effect; late at night = negligible effect. At it’s best, the SDS reduced some bloom or overhang to the sound, particularly in the midrange, that increased the image focus while making the sound a bit dryer or less chesty. It also tightened up the bass and removed a very slight sense of fog to the treble. As I said, the effect varied considerably with the SDS in and out of the system depending on time of day, but the Aries sounded more consistent when using the SDS. Recommendation: new cable for the arm first (definitely and immediately); SDS second, maybe in the future.

The Aries/SME combination is a good, mid-level analog front-end system. It was completely reliable, easy to set up and use, and looks great. If the combination provided a more consistent sense of immersion in and understanding of the musical message instead of just an occasional one, it would be more satisfying.