NOTE TO READERS: (Year 2006) Atma-sphere has been asked repeatedly over several years to comply with 10 Audio’s policy on quotes (please see the bottom of the Home Page). They continue to refuse this simple courtesy.

The Atmasphere M60 mk. II amplifiers are outstanding products. They are 60 watt tube, single-ended, class A monos, sold in kit form for about US$2300/pair and assembled for about $3800/pair. What makes them outstanding? First, they are OTL, which translates into a significant improvement in transparency and speed (slew rate) over transformer coupled tube amplifiers. Second, they are scalable, so if you do not need 60 watts, you can simply remove output tubes to obtain the appropriate power output for your room and speakers. Third, they use common and inexpensive tubes: 6SN7 (less than $10 each) and 6AS7G power triodes ($15-20 each). Fourth, they are relatively inexpensive by OTL standards. And fifth, if you get the kits as I did, they are easy and fun to build, with great factory support. 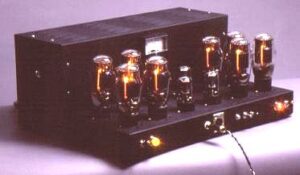 The above are all interesting facts about why this product might be worthy of consideration. But the facts provide just a door, which, when opened, allows one to enter into a special musical experience. I have owned many amplifiers including Mark Levinson, Classe, Rowland, Audio Research, Audio Note, BEL, etc., etc., so I have some point of reference to make the following observations. You have no doubt heard about this or that component “taking away layers of grunge” or being “like looking through a clean window” or “lifting the last veil” between you and the music. None of the amplifiers I previously owned, even though some were excellent performers, cleaned that dirty window like the Atma-sphere M60!

These amplifiers have stunning transparency and speed: one of the most difficult sounds to reproduce cleanly is cymbals. Most amps make cymbals sound like some variation of white noise. Some even make cymbals sound like real metal, but screw up the decay after the cymbal is struck. Not the M60! Another good test is horns – trumpets, sax, etc. Many amplifiers get the metallic sound of these very harmonically rich instruments fairly accurately, but they also can easily make them sound too hard and coarse which makes listening to them for any length of time annoying. Again, not the M60.

The M60s have very acceptable bass which is much better than most tube amps and almost as good as the Classes and Krells in this area. Where they really shine above the competition is in the midrange and treble. In this range, they are superb. Clean, fast, natural, balanced throughout the musical spectrum and with astonishing low-level resolution. ‘LIVE’ is in the details, and these amplifiers deliver those details in a completely natural, unforced way.

If you are tired of thinking about what your next amplifier experiment is going to be, please check out the Atmasphere M60 mk. II. I believe you’ll be glad you did.

Update January, 2002. Last year I sold the 1997 vintage M60 mk. IIs that I assembled from kits, and purchased the mk. II.2 version. These were also built from kits, one of the last pairs offered before the kit option was discontinued. The obvious difference is that it has two switches on the front panel that make bias adjustments simpler. According to Ralph Karsten, it is completely current and has all available options: Teflon capacitors, Cardas posts, Caddock resistors, and Power-Supply Boost upgrades. When the mk. II.2 became available, I bought it without really considering other brands. I hear other amps regularly, but none had the see-through, harmonically correct, nicely dynamic, music-making capabilities of the Atmasphere M60s. The improvements offered by the upgraded capacitors, resistors, and binding posts, taken together, are not subtle. Its almost like (well actually, it is nothing at all like this illustration) you fall in love with a beautiful person and wake up six months later to find he or she has a front tooth missing. There is a giant step forward in clarity and resolution that makes the standard version sound veiled in comparison. The fully-optioned mk. II.2 is a large step up from most of the competition.

Update July, 2003. Listen and learn. Please see #3 at the top of the Reviews page. Experiences with the Ayre K3x and Rowland Synergy IIi preamps, the Bryston 3B SST and Ayre V5x amplifiers among others, and Stax electrostatic headphones, have convinced me that the M60 amplifier has a lean lower midrange and bass region. This seems to affect everything below about 300 Hz. The effect of this relative imbalance is to give the music more of a sense of air and transparency than is true to the recording, while robbing the music of a degree of body and richness.

This can diminish the natural foundation of the music, especially if any source component or loudspeakers has any hint of weakness in this area. Importantly, the Koetsu guide would have noted better bass capabilities from all of these cartridges if the amplifier used during the evaluation was other than the Atma-sphere M60. However, the bass character of each cartridge in relation to the others is as described. The Atmasphere MP3 preamp seems overly ripe in this region which is why the combo with the M60 sounds balanced. Since I normally use adjustable, powered subwoofers, I was able to “dial out” this leanness. But recent comparisons make this character obvious, and indicate that system matching is a more important consideration than was previously suggested by listening to this amp on its own.

It would be a mistake to underestimate the amount of heat these amplifiers give off. In the winter, they will make you cozy and warm in an average sized room. In the warmer months, you may listen less (or not at all, as one owner reported). In my insulated listening room during the summer, I would open the door and take a break after each album side to let the heat escape. As noted in the first paragraph, it is possible to remove power tubes, so if you can do with less power, there will be less of an issue with heat.

After two samples (four chassis and 32 output tubes) and seven years living with M60s, it is worthwhile noting that my experiences with tube life is different than is advertised on the Atmasphere Web site: “We built the first prototype of the M-60 in 1980 and it is running today with over 20,000 hours on the same output tubes.” I replaced five output tubes in seven years. This experience indicates a real-world output tube life of approximately 3000 to 4000 hours, or just 20% of the factory claim. It should be noted that the failure of one output tube made a loud “pop” and damaged the voice coil of a loudspeaker driver, requiring the driver to be replaced (at my expense).

UPDATE. January, 2007. There have been several posts on a public audio message board from one or more interested parties that contain personal and defamatory attacks against this writer. I have tried repeatedly to respond to these posts for the purpose of defending myself and also the fairness and accuracy of this review. These responses are routinely deleted from the message board within minutes of being posted. I ask that you please keep in mind that my apparent lack of response to posts in other venues is not an admission that the information in these posts, in whole or in part, has any validity and/or truth whatsoever.