Dynamic…extended…powerful. These are the initial impressions when I first heard the Antique Sound Labs 1006-845(DT) mono power amplifiers. Since this was my first exposure to the 845 tube, I didn’t know quite what to expect. Any expectations I had going in to the audition were quickly replaced with admiration and a little bit of awe at how the 845 bridges the gap between tube romanticism and solid state control and extension. 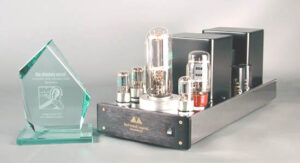 Compared to the Atmasphere M60 mk. II.2 amps, Ayre V5x, and a few others, the “DT” had exceptional resonant detail in the bass which was almost the perfect blend of solid-state tightness and tube harmonic detail. I loved it! The bass was as deep as any sand amp I can remember, and within its power rating, just as powerful and dynamic.

In the midrange, there was slightly less of the euphonic tube standard, although much more realistic than the Ayre, with more depth and believability. This is a SET amp, and you definitely get the SET magic in the mids which are very coherent and rich. No syrup, though, that you can get a hint of with some 300B tubes. The soundstage was very deep and precise which resulted in a stage in which it was easy to picture the musicians playing in real space. The treble was extended and clean, with just a hint that some low-level detail was further back in the mix than presented with some other amplifiers. Nothing was obscured, though. I’ve heard cables that had much more of an effect in the area of treble detail, so this is more of an observation than a criticism.

The problem. The amplifier came equipped with TRI branded power supply capacitors, which are rated for 450 volts. I confirmed the schematic’s actual voltage on the power supply at 968 volts. Since the 450 caps are used in pairs, a pair is rated at 900 volts maximum continuous, well below the 968 volts actual. Within hours (these amps had several hundreds of hours of use before I received them), one amp arc’ed its capacitors, resulting in liquid dielectric pooling below the amp, and the other amp showed dried leakage below a couple of caps. Not a good sign. Divergent Technologies, the North American importer located in Canada, ordered higher voltage rated caps – 500V caps from Nippon Chemicon – and the amps worked fine after all caps were replaced. Down-time was about a month.

I’m no stranger to working inside live electrical components, having spent nearly two decades servicing various types of equipment, including telecommunications, computers, and medical. The 5 to 12 volts in a computer can’t hurt you much, but the kilovolt in these single-ended amps can just ruin your day. I mention my background so you’ll understand when I say that one thing really bothered me about the repair. There was no place to send the amps to verify their proper operation. Divergent didn’t want it, and there was no authorized repair facility in the US. Replacing the caps was easy – no soldering – but not being able to send the amp in for repair and check up was quite disconcerting. At any rate, the amps worked fine after the capacitors were replaced. On the subject of reliability, a couple of owners have reported hum issues that were not able to be corrected, even after a return trip to Divergent.

The 22 watt rating seems about right, although in practice, the excellent dynamics of these amplifiers will make you think you have about double that amount of power on tap. For those who like an opportunity to use a soldering iron, this amp provides an excellent platform for parts upgrades due to the wide open, all point-to-point parts layout inside. I was very tempted to keep this excellent performer and upgrade some of the caps and wiring, but there were too many other projects waiting in the wings.

If you are looking for one of these fine amplifiers on the used market, just make sure to have or obtain the 500V caps and you will be treated to some of the best amplification around at a bargain price.