The Audience Adept Response aR2p-TO High Resolution Power Conditioner is the latest in a product line of well received power conditioners which are priced from $695 to $8,600. The $1,600 aR2p-TO model differs from the basic $695 aR2p in its use of expensive Teflon-dielectric “Aura-T” capacitors with OHNO (mono crystal, oxygen-free) copper leads. I did not experience the basic non-Teflon equipped model. I initially auditioned an aR2p-T model, which does use Teflon capacitors but without the latest capacitors featuring OHNO copper leads. 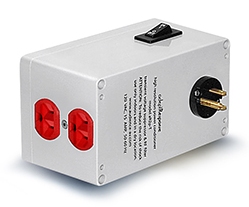 “The aR2p is designed like the…twelve outlet Adept Response, aR12. It is hand built without the use of circuit boards or clip on connections.

“The aR2p plugs directly into a wall or ceiling power outlet (no power cord required). A simple high quality multi outlet power distribution system plugged into the aR2p can provide power conditioning for an entire audio or video system; albeit without component to component isolation featured in multi-outlet Adept Response conditioners.

The aR2p is a rather large box that plugs directly into a power outlet, obviating the need for a dedicated power cord. This makes the unit more affordable. One might think that a power conditioner would not benefit from a special power cord since its purpose is to isolate your audio and video components from the electrical influences of your building’s power supply. I am sorry to be telling you this, but all power conditioners that have visited my listening room have benefitted from the use of high quality power cords. The fact that the Audience conditioner saves you hundreds or thousands of dollars by eliminating the power cord is a significant economic benefit. The downside is that the rather large enclosure will cover the 2nd outlet in a standard duplex power outlet, or leave only one outlet accessible in a dual (4 receptacle) outlet. Audience power conditioners have a 10 year warranty, reflecting the company’s confidence in the quality and reliability of their products.

If you do not believe that the phenomenon of break in is a reality, just install this device. I had it installed for about 200 power-on hours and called Audience’s president, John McDonald, to discuss my observation that the aR2p-T was not really helping the sound. He suggested, in his characteristically understated and kind way, that he had received reports that the unit might benefit from upwards of 400 hours of break in to sound its best. That advice proved to be dead-on accurate. For the new aR2p–TO unit, I let it power my computer system, including UPS, monitor, laser printer and small Realistic stereo receiver for five full weeks – about 840 hours – before installing it in the main stereo system. I had a feeling, completely non-quantifiable, that my computer ran just a bit faster during this period.

My equipment rack, which is custom made from about 700 pounds of sandstone and is not easily moved, resides next to the side wall. Five meter lengths of interconnect cables connect the preamplifier to the power amplifiers which are located between the speakers. Due to this layout, I evaluated the aR2p-TO when providing power conditioning to all of the front-end components, and then separately when conditioning the power to the power amplifiers.

The aR2p-TO is exceptional by offering improvements in sound quality at all times: daytime, evening, and also late at night. For the front-end components, which include preamplifier, DAC, phono preamplifier and tuner, there was a cleanliness to the sound with darker and quieter backgrounds. Instead of being called a power conditioner, the aR2p-TO could be called a “power cleaner” because it effectively cleans up the sound of the power. The system had higher resolution and a sense of relaxation and ease that made long listening sessions more enjoyable. When auditioning and reviewing components, I often listen intently and critically for long periods, which can easily become tiresome and make reviewing audio components for you feel like hard work. The aR2p-TO makes this job feel a lot less like work and more of the pleasure it should be.

The aR2p-TO helps my already-good AC power, while one or two other conditioners have actually harmed the sound. Almost any conditioner will help if your power is very contaminated, but only a truly excellent conditioner can improve good quality (often late-night) AC power. After the aR2p-TO was connected, my system offered more consistent sound quality, whether during the day time or at night. There was a very positive effect on the digital components, specifically the Prism Orpheus Digital Interface. Sibilants were reduced to a more natural quality. The depth of the soundstage and overall size of the recording venue increased noticeably. This requires absolute purity of the incoming power to allow the sensitive digital processor to do its job without interference from the environment.

I have copied most of my CDs to the music server and enjoy the sound of CDs when upsampled to 24 bit/176.4 kHz during playback. As with the original CD sound, upper frequencies can be a bit “twangy” and out of control. That’s CD for you! This discordant quality in the upper frequencies was almost completely eliminated when the digital processor was plugged into the aR2p-TO. Curiously, the music server sounded better without the aR2p-T because it softened or lessened high frequency transients and seemed to compress dynamic impact. The music server sounded basically the same with or without the new aR2p-TO model. All other line-level components benefitted when using the Audience conditioner.

Replacing the older aR2p-T with the current aR2p-TO version was not a minor upgrade. The entire mid-band became creamier and richer, such as you often experience with analog sound over good digital: LP vs. SACD. The sense of ease became even greater. The difference between the two units was like going from the mild attitude of “Let’s have some fun tonight” to a rowdy “We’re going to kick ass!” (“Kick ass” is a non-violent reference denoting anticipation and excitement.) The sense of timing and dynamic impact was noticeably improved, uplifting every musical cut from “good sound” to “performance”. The bass had more kick, like upgrading from a Black Cat to a cherry bomb. I rechecked these findings many times because it was difficult to believe that about twelve inches of the better OHNO wire in a power conditioner could have such a profound effect on the sound coming out of my speakers. The consistently amazing resolution of the YG Acoustics speakers provided a very clear window on these differences.

What is “loud”? It is a combination of things and not simply the absolute level of the volume control or dB output of your loudspeakers. It is partly the pressure of sound against your eardrums, but sometimes we hear music at relatively lower levels that makes us want to turn down the volume because it seems “too loud”. The opposite is also true: we can sometimes listen at very high sound pressure levels (SPLs) without the feeling that the music is too loud. I suggest that the perception of “loud” is primarily composed of two factors: SPL and distortion. With the Audience power conditioner, distortion is greatly reduced which permits comfortable listening at higher than normal volume levels.

If I were to try to quantify the improvement in sound from having the front-end components (sans music server) plugged into the aR2p-TO, I might suggest a 5-10% overall sound quality upgrade. However, that does not begin to suggest what happened when I plugged my power amplifiers into the aR2p-TO. My system generally performs at a very high level, and changing one quality component for another usually provides small differences in one or more musically significant areas. Rarely does changing a component “make me rediscover my entire music collection”, as we like to say. This is one of the exceptions to that rule. Using the aR2p-TO on the power amplifiers was nothing less than a shocking, jaw-dropping, shake-my-head-in-disbelief change for the better. It is very similar to upgrading your amplifiers to a higher performance category. For the $1,600 cost of the Audience power conditioner, I felt I had doubled the performance of my amplifiers. Instead of $8,000 amplifiers, they now sounded like $20,000 amplifiers! No, this was not a subtle, “golden ears only” upgrade in sound quality. Not by a long shot, and it took only a few moments to begin to understand just how important it is to keep this small box in my system. Yes, I purchased the review sample.

The most obvious effect was to eliminate what seemed to be a “dampening field” that had pervaded the entire midrange. This dampening field was murkiness and muddying that pushed the sound back and down, quashing the sound stage and reducing life and energy. Instantly with the installation of the aR2p-TO on the power amplifiers, the sound became much more vivid, alive, dynamic, pure, sweet, and resolved. The bass resolution improved as well, along with a smaller increase in the clean dynamic performance in the upper treble.

The Parasound JC-1 amplifiers keep the output in the purest Class A operation up to 25 Watts of output power. Above 25 Watts, the class of operation of the output stage changes to AB which is a change that moves the sound quality in a negative direction. With the aR2p-TO, it seemed that the amplifiers gained an additional 20 Watts or so of Class A power capability, letting them play much louder before the constant shift to the relatively inferior Class AB sound became noticeable. The older aR2p-T version allows a much smaller “apparent Class A increase” of only about 5 Watts. In my system, this apparent additional 20 Watts of Class A-quality power permits all music to have the quality of Class A operation without the noticeable change to Class AB on almost every dynamic peak. In other words, the quality of the amplifier’s class AB output greatly improved. Of course, your mileage may vary depending on your listening habits and system. For me, this has widened the performance envelope of the JC-1s to the point where, in my system, the amplifiers are entirely acceptable for all types of music; melodic or rocking, soft or loud.

While I like the sound of the Audience conditioner on the system’s front-end components, I love the significant upgrade it gives to power amplifiers. Whether for tube or solid-state power, the aR2p-TO provides a very worthwhile contribution to my enjoyment of music. For line level components, I found the aR2p-TO to offer worthwhile improvements and it is certainly worthy of an evaluation in your system. For power amplifiers, I consider the aR2p-TO to be absolutely essential. Congratulations, Audience! The adeptResponse aR2p-TO power conditioner is a stunning achievement.

The Audience team is grateful to you and 10Audio.com for publishing the first ever review of the aR2p-TO. We appreciate that you have so accurately discerned and described the degree of enhanced audio performance achieved by simply using OHNO (mono crystal) copper leads on the Aura-T (Teflon) capacitors.

Thank you and best regards,