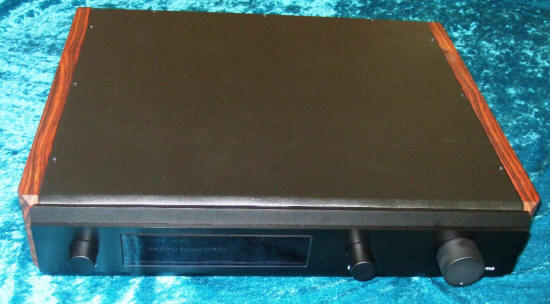 “While it would take too long to describe all the circuit changes, let me just highlight the more significant improvements:
1) The power supply has been completely redesigned and upgraded to deliver more clean, quiet power.
2) The materials and architecture used in the wiring harness have been upgraded, and now incorporate the finest materials and a proprietary complex architecture which delivers dramatically improved clarity, textural richness, purity of tone, and harmonic structure. Because solid high grade cryo’d silver is one of the materials used in the harness, we have added the letter “S” to the designation.
3) We have upgraded the coupling capacitors used in the “n” upgrade from the modest quality Hovland Musicap, to the finest film capacitor we have ever heard, the copper film CUTF V Cap in our “v” upgrade. It is difficult to overestimate the dramatic improvement in performance that follows from this upgrade. Chris Ven Haus says the CUTF V caps sound listenable after 40-60 hours, but need 400-500 to fully relax.
4) In conjunction with the V Caps, we have taken our basic resistors and upgraded the most critical resistors in the signal path to premium Vishay resistors for increased immediacy, snap and transparency.
5) We have added two new grid transformers and other tweaks to improve micro-detail retrieval, to widen and deepen the soundstage, and to improve imaging focus and layering.”

The review sample also had special Audio Horizons heavy copper tube Shield-Dampers. The four tubes were factory supplied Tesla PCC88/7DJ8, which I have used in several other preamplifiers in place of 6922s and 6DJ8s to excellent effect. I did not have the TP 2.1 on hand for a direct comparison to the new model, but I had something even better: the ability to bypass the preamplifier completely and hear the direct feed from my Prism Orpheus Digital Interface to the power amplifiers and exactly how that sound changes when the TP 2.3SvB (hereinafter “TP 2.3”) is inserted into an otherwise unchanged signal path. 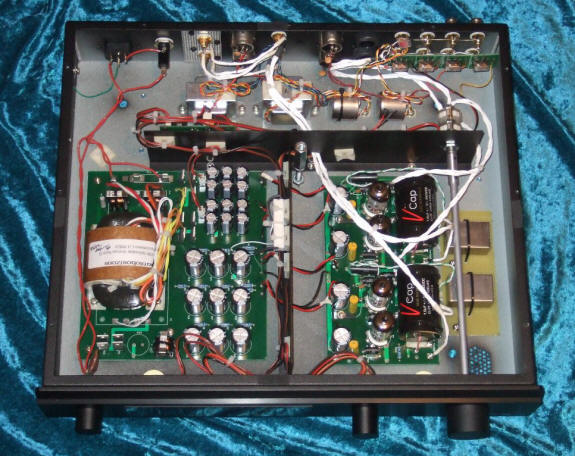 Please let me take this early opportunity to set some expectations regarding the review context and subsequent final rating as they relate to the earlier review of the excellent sounding TP 2.1. The current review system is much better than it was during the audition of the TP 2.1 model. While the power amplifier(s) are of similar overall sound quality, the sources – phono cartridge and digital – are much improved, the YG Acoustics Kipod Main Modules speakers have hugely greater resolving power than the older (and now discontinued) Gallo Reference 3.1 speakers, all of the current cabling is more neutral, and my listening room’s power conditioning has improved significantly over the intervening years. The comparison preamplifier, the extremely transparent Mark Levinson 326S ($11,400 with phono) is so far superior to the modified Audio Research LS-22 that the differences are like late-evening and day, if not quite night and day. When we talk about marketing, you know that one of the most basic contributors to success is “location, location, location”. For an audio component review, it is “system, system, system”! Since the current system is greatly improved over the one in which the TP 2.1 preamplifier performed so well, the TP 2.3 would require a much higher level of performance to attain a similar rating in the context of the current review system. See also “Important Notes” on the Reviews page.

The TP 2.3 is fully the equal of both the bypass and the 326S preamplifier in the area of large scale dynamics, consistently offering leading edges of notes that have remarkable impact and resolution. This is a seemingly difficult combination to realize, as many components blur these sounds just as many recordings are unable to present both the power and detail in those fleeting microseconds. For recordings, this anomaly is probably a result of compression used during the recording or mastering process, and usually requires a very well recorded LP – or my 24 bit 192kHz recordings of my LPs – to reliably ascertain the true character of a component in this critical area. An excellent example of this can be heard on the cut “King Grand” from the Sea Level LP On The Edge.

Listen to the Bruce Springsteen LP Tunnel Of Love. On “One Step Up”, the bass quality of the Audio Horizons preamplifier is showcased with sustained notes that span about 1½ octaves. This song will tell you almost everything you need to know about the TP 2.3’s linearity, resolution and fortitude across the entire lower range. On the same cut, you can clearly hear Patty Scialfa’s voice coming from about two steps behind and to the right of The Boss. With the Levinson preamp, she is only one step back on “One Step Up” and not quite as solidly formed. The TP 2.3 easily provides huge, powerful, room-shaking bass when called for, with near state-of-the-art resolution. Singers have a wonderful sense of body and depth and it takes a really poor recording (or certain gear) to hear anything akin to a “cardboard cutout” performer.

Another example of the outstanding imaging prowess of the TP 2.3 is from the double LP set Diary of Alicia Keys on the cut “Samsonite Man”. The background singers are obviously in the same acoustic space as Ms. Keys and singing in a row behind her, clearly audible as distinct voices. Yes, this is a studio recording, highly processed and probably mixed for radio and download. However, the LP seems to transcend the engineer’s intent and offers a very enjoyable listening experience. The preamplifier is consistently able to differentiate stage locations in all three planes and presents, for example, the precise location of each cymbal in the drum set: up, down, left, right, forward, back. How’s that for imaging?

The TP 2.3 offers a sound that is always organized; never confused. The crescendo in the standard audiophile track “Danse Macabre” can become an overloaded wall of noise with some components, but the Audio Horizons preamp never sounds strained as it carries the listener through this orchestral explosion with clarity and grace.

The midrange and treble have a continuousness that is very natural with no emphasis in any particular frequency range. The sound is absolutely linear with perfect octave-to-octave consistency in tone, speed, responsiveness, and low level resolution. Even the upper midrange, which is the Achilles Heel of many components, is perfectly integrated with the vocal range in the mids and harmonics in the treble. This is much, much better performance than was realized from either the Audio Research LS26 or McIntosh C220 preamplifiers. There is a consistent feeling of naturally flowing notes across all the octaves. 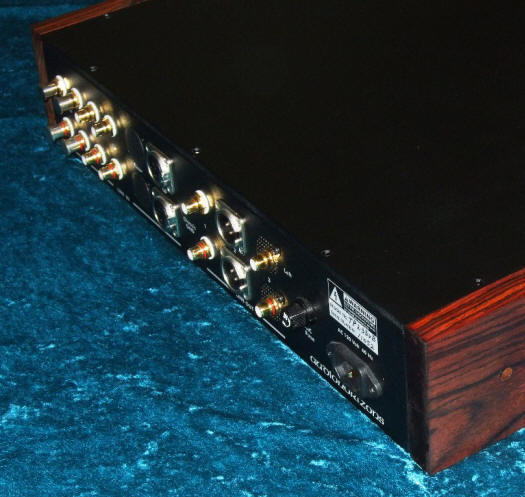 The Levinson has better extension in the upper treble with more air and sparkle. I am certain that replacing the Tesla PCC88 tubes with something like Telefunken 6922s would level that playing field. The TP 2.3 has a bit more power and slam in the lower bass, while the 326S offers a bit better resolution. The solid-state Levinson does not have quite the sense of continuousness as the depth of the sound stage increases, but the layers of the performers are presented in sharper relief. Neither preamp is really better in the sound staging department: just a different interpretation.

The direct feed from the variable outputs of the Prism Orpheus to the power amplifier is a bit coarser, especially on rips from CDs. These WAV files are ripped at CD’s native 16/44.1 and upsampled by JRiver Media Center to 24/176.4 before being sent over Firewire to the Prism converter for playback. The TP 2.3 seems to apply a dab of polish to those rough edges in the upper frequencies which makes the music more natural and “analog” sounding resulting in a more enjoyable and captivating performance. Even though the bass performance of the TP 2.3 is completely satisfying, the bypass reveals just a small extra level of resolution that allows one to hear the vibration of strings just a bit more clearly. There is more upper treble energy present with the bypass as noted above, which the Levinson preamp also passes more correctly.

The TP 2.3 was completely reliable during the audition, and there were no unwanted noises during the turn-on or turn-off sequences. The preamplifier offers basic controls and input indicators, and I missed having a numeric readout of volume which is very helpful during a review to quickly reset gain. The very high signal-to-noise ratio provides outstanding low level resolution.

The Audio Horizons TP 2.3SvB is a fine preamplifier and it takes real effort to find fault. The list of the preamplifier’s strengths is long and inclusive of every important character trait. To paraphrase Sherlock Holmes, whatever is not on the list could be assumed to be a deficiency. Those very few items are only noticeable in direct comparison to certain other components and never reach the significance of detracting from or interfering with a musical performance. The TP 2.3 is clearly superior to several well-received preamplifiers in the same general price category. At a list price of $5,534, with remote control optional for $375, the TP 2.3 is easily one of the best sounding preamplifiers available for under $10,000, offering a small sonic character that will be highly praised by many experienced listeners.

Thank you, Jerry, for another excellent and laudatory review. A 9.5 LP rating is high praise. Thank you for reminding the reader that standards of excellence continue to evolve and that the “TP 2.3 would require a much higher level of performance [than the earlier TP 2.1nB] to attain a [9.5] rating in the context of the current review system.” We are pleased that you found the TP 2.3 preamplifier compared favorably to the Mark Levinson 326S, which at $11,400 is more than twice the TP 2.3 price.

Your review sums up Audio Horizons’ design philosophy and goals: to reproduce music without adding component coloration; to wed tube richness to solid state definition; to produce an extremely quiet, clear, open and transparent sound; finally to capture and reproduce the music in the sound and to do so at a price the average audiophile music lover can afford.