The Auralic Vega DAC is a compact powerhouse, offering the latest in digital technology. At a list price of $3,495, it provides up to 32 bit 384 kHz decoding and upsampling and up to DSD256. The built-in volume control lets the Vega function as a preamplifier in an all-digital audio system. One key feature is a “Femto Master Clock” with only 82 femtoseconds (0.082 picoseconds) jitter. This is truly state-of-the-art performance in this critical area which has been known since the early days of consumer digital – the early 1980s – to be a major factor in the quality of digital music reproduction. 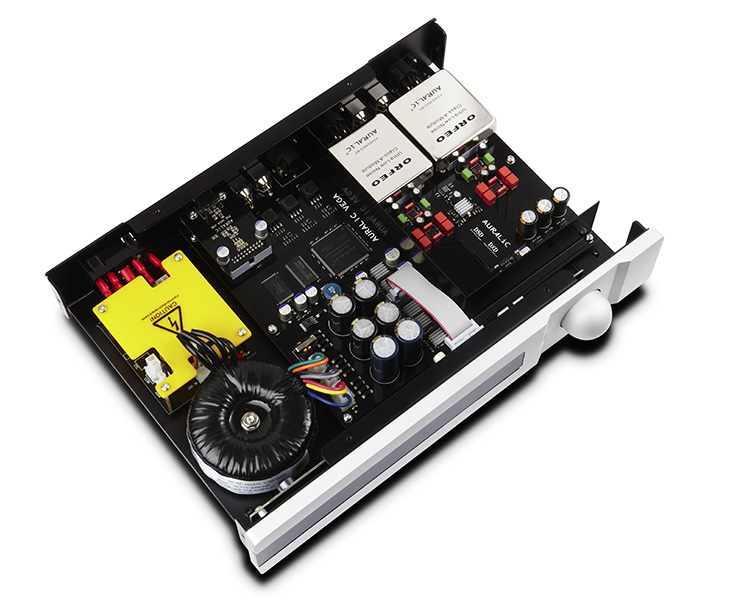 The Vega includes 1 AES/EBU, 2 coaxial, 1 Toslink and 1 USB input. The USB input was used exclusively for this review. You have a choice of unbalanced RCA and balanced XLR outputs, which can be used simultaneously. The compact chassis measures 11 inches wide x 9 inches deep x 2.6 inches tall and weighs 7.5 pounds. The fit and finish of the main unit is commensurate with the price, sleek and modern. The dimmable OLED display is very legible and informative. The plastic remote control offers full control of all functions.

One feature worth special mention is the selectable digital filters that can change the sound significantly. For my auditioning, I used the default “Mode 4”, the minimum phase option, which seemed correct during the initial break-in and set-up phase. There are 4 other filter options available at the push of a button. Each piece of music was not tried with all 5 modes. The observations below describe the character of Mode 4.

The Auralic Vega gives the listener a very precise sound with outstanding separation of voices and instruments. On Loggins and Messina’s Full Sail, which I recorded from LP at 24 bit 192 kHz resolution, the various backing vocals never got lost in the mix. They are clearly mixed at different levels but never lose intelligibility.

This clarity extends from the low bass to the upper treble. The bass frequencies are very detailed and high resolution. The midrange is full and resonant, although the PS Audio and Cary DACs dig deeper and offer a more convincing vocal range with more depth and sense of a singer performing live instead of from a good recording. The treble range is very present and extended, although missing the last bit of air.

Big volume changes don’t seem to track correctly and large scale dynamic impact is reduced. The leading edge impulse is limited, as if the recording engineer reduced the level with a limiter, compressing the peaks.

The soundstage is very wide with good depth. The clear and precise overall character of the Vega delivers performers on the virtual stage with excellent lateral separation. Orchestral recordings have good layering of the musicians towards the rear of the stage. The sound stage from the Cary DAC-200ts is deeper and more identifiable. This is dependent on low level resolution and correct micro-dynamics which the Vega shortchanges to a small degree.

The Auralic Vega delivered some enjoyable listening. The other DACs on hand, including the Linx Hilo, were preferred for long term satisfaction due to the Vega’s relatively arid and marginally superficial character. The sound was better using a conventional preamplifier with the Vega’s volume control set to maximum.

You buy a component for all the good things it does, and the Auralic Vega delivers the good things. But you don’t keep a component because of its shortcomings. This review focuses on the negative. If your audio system would be synergetic with the sonic character of the Vega DAC, it will deliver the latest technology for your listening pleasure.