Shinobu Karaki-san’s designs are state of the art innovative semiconductor technology and combined with excellent craftmanship makes his audio products worthy of further investigation. There are three phono preamplifiers in the product line: VIDA Supreme $12,790, VIDA $4,990, and the model under review here today, VIDA Prima $1,200. Housed in an attractive wood-grain enclosure measuring 9.9 x 9.7 x 2.7 inches and weighing about 5 pounds, the VIDA Prima offers 64 dB of gain in Moving Coil mode, or 40 dB for Moving Magnet cartridges. There are three loading options: MC-Low for <14 Ohm DCR cartridges, MC–High for >15 Ohm moving coils, and MM for 47k Ohm loading. Modern cartridges tend to be better controlled on their high frequency performance and don’t seem to require as much loading as early models needed to tame the rising treble balance. Try the MC-High loading first. If it sounds harsh or rough, then switch loading to MC-Low. One of these loading settings is a good starting point, but maybe not the best final choice, as we will discover below. 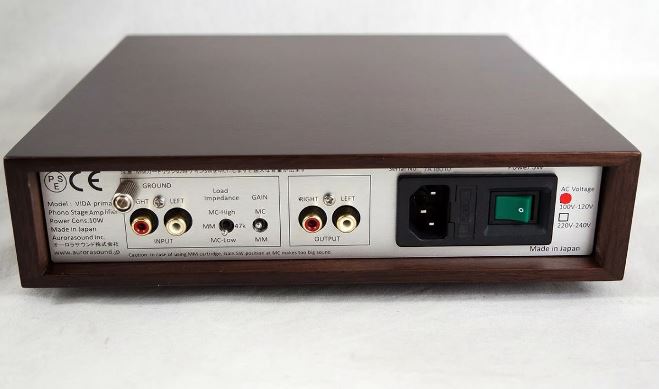 The switches for gain and loading are easily accessible on the rear panel. The power switch is also on the rear panel as the VIDA Prima is meant to be left powered on at all times. On the front panel is a large Mute button that requires just a light touch to activate. This is a nice feature as it promotes a gentle touch along with a similar handling of the LP that just began or ended its play.

The VIDA Prima was auditioned with two moving coil phono cartridges: a 16 Ohm DCR Miyajima Madake and a 1 Ohm ZYX UNIverse Optimum SE. The Madake lists for $5,895 and the Optimum for $16,995. This will be interesting.

The VIDA Prima was auditioned with a VPI Aries 3D turntable, augmented with a VPI Periphery Ring clamp, a Stillpoints LPI clamp, VPI HR-X feet and HR-X pulley, and Phoenix Engineering Roadrunner/Eagle precision drive electronics. The Roadrunner/Eagle combination maintains the turntable’s platter’s speed at 33.333 RPM +/- 0.003 RPM. Three tonearms were used on the VPI: a Kuzma 4-Point, VPI 10 inch 3D, and Tri-Planar VII SE. The Kuzma brought the upper frequencies forward just a bit, the VPI printed arm was quite reticent in the treble, and the Tri-Planar is supremely neutral and articulate. A BMC MCCI ULN phono preamplifier, $4,690, is the current reference. 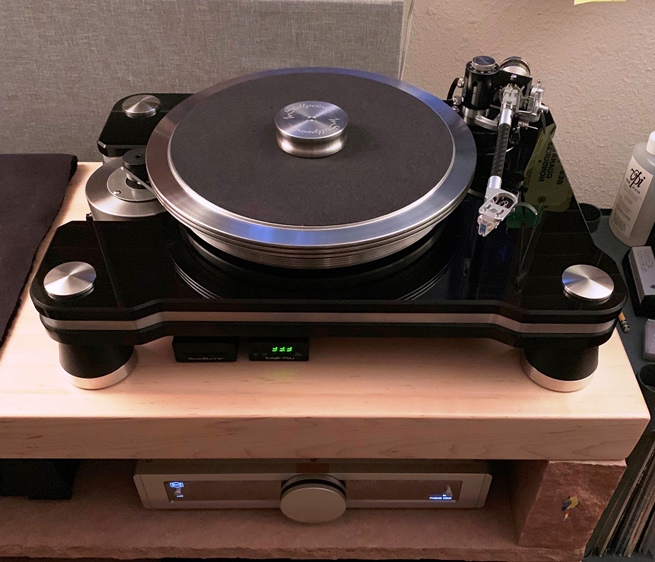 There are no pops or other noises when switching either of the rear switches, gain and loading, or the big Mute switch on the front panel. The noise level, with no record playing and the volume at a normal listening level, is audible as a low hiss from about 1 ft from the speaker with the 0.1mV DCR ZYX cartridge, or barely audible an inch from the speakers with the 0.23mV Miyajima cartridge. The background hiss has an unusually low amount of high frequency content, making its presence less audible and objectionable.

One of the first areas to impress a listener is the excellent dynamic performance of the VIDA Prima, or the ability to go from soft to loud instantly. All frequencies have energy and pop. A wonderful midrange is apparent as voices are delivered with great depth and individuality. On the Doobie Brothers Stampede LP, the individual singers are easily identifiable. When they jam in “I Cheat the Hangman”, the instruments stay locked in on the virtual stage. One of my favorites, “Slat Key Soquel Rag” really delivers a memorable listening experience.

Percussion is well served by the VIDA Prima. The preamplifier delivers excellent leading-edge, impactful, timely sound. Not only is the initial impulse produced with speed and power, but the next few milliseconds complete the picture of the stick, beater, or mallet. This can indicate a well-designed power supply, able to serve the maximum needs of the audio circuitry without strain.

Joan Armatrading’s voice is wonderfully rich and expressive. I have followed her music career for over four decades, attending my first of her concerts in the early 1970s. The VIDA Prima delivers her unique vocal character extremely well on her Hearts & Flowers LP.

Switching loading from MC-high to MC-low brings the treble into a more midrange focus and gives a small increase in bass power. This is exactly what we expect with changes in load resistances. By midrange focus, I mean less air and extreme high frequencies. That’s what increased loading does: decrease upper treble glare from ringing and sounding harsh. The goal is to find that setting where the glare is gone without removing some worthwhile high frequency content. For both the ZYX Optimum and the Miyajima Madake, MC-high sounded best. Both cartridges suffer very little from high frequency ringing that would require greater loading (fewer Ohms). 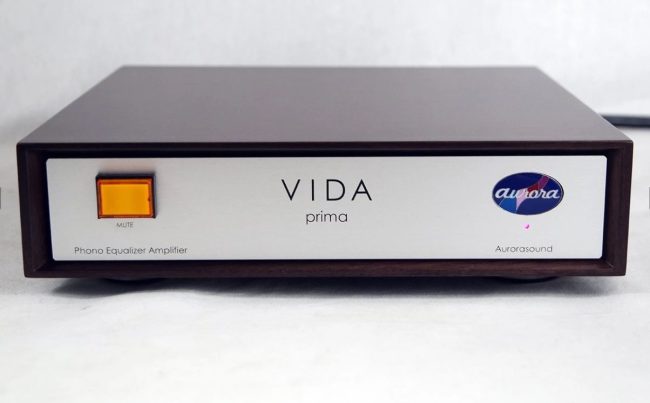 Loading is a trade-off. Typically, higher resistor values offer more extended treble range with an increase in low level detail, while the bass can suffer with reduced power and definition. Lower values, for example 10 or 100 Ohms, can tame a cartridge’s brittle treble. A good rule is to use the highest values (less load) where cartridge ringing, and the attendant harshness, is not a problem.

The lower frequencies, specifically the mid to low bass, below 100 cycles per second, are well demonstrated by the song “Oh Yeah!” on the album Stella by the very dynamic band Yello. There are a few good cuts on this album, and they provide very good exercise for an audio system. The song “Vicious Games” has some kick, and interesting phasey things happening, and with women singing in the far background. The VIDA Prima delivered a very clear and understandable, distinct, performance. The upper frequencies offer very long-lasting harmonics and have glare and harshness under control at all times.

For all music, the VIDA Prima never offended by adding any trace of added artifacts, i.e. crap, to your LPs. But if the LP was in poor condition, the sound quality was also poor. Acoustic space is very apparent with some sense of texture and the overall size of the venue.

Just being curious, I unloaded the Madake by switching the loading to 47k Ohms. WOW! The upper frequencies opened up and became noticeably clearer and with finer resolution. Update to my advice above, start your tests for the optimum loading setting with the MM (47k) settings. If that sounds harsh, go to MC-High, then MC-Low. You should not be discouraged with the 47k Ohm load on MC cartridges if you hear some occasional harshness. This is very often the fault of the recording which we try to compensate for by loading down the cartridge and throwing out a worthwhile amount of air and treble extension.

The VIDA Prima and Pass XP-25 share an important attribute: they both sound best when the Miyajima cartridge is loaded at 47k Ohms. This suggests circuits that are designed to manage a MC cartridges’ tendency to sound better loaded, a weakness we refer to as “ringing”. Some of this artifact could be an issue with the phono preamplifier. The VIDA Prima does not seem to have any tendency to exacerbate ringing. In fact, ringing seems to be a non-issue with this cartridge, resulting is outstanding openness and extension, with excellent resolution up to ultrasonic.

Singers are presented with substantial body and depth near the front of the virtual stage. Left to right imaging is outstanding, and stage depth is very good, although the deeper area of the performance stage is brought forward, relatively speaking.

“Relatively” is compared to a $23,000 cartridge/phono preamp combination consisting of the ZYX Optimum cartridge and BMC MCCI ULN phono preamplifier. Here we have a $7,100 combination of the VIDA Prima and Miyajima Madake moving coil phono cartridge. The law of diminishing returns is clearly evident here. The overall sound quality difference is about 2% for a 309% increase in cost. That 2% includes better 3D effect of performers with more body, higher resolution in the upper frequencies, and the leading edge of bass notes is a bit better defined. These are small differences. The total effect of the more expensive combination is to move each performance one step closer to an “unobtanium” goal of home audio: virtual reality.

The treble range is better served by the Miyajima cartridge’s more mainstream electrical properties than the more extreme properties of the ZYX Optimum SE cartridge. The upper frequencies are clear and open, with a good sense of the ambience of the venue. Ambience cues require fine resolution and a very linear and extended sound. The VIDA Prima has both of these important attributes to a high degree not expected at this price. The ability to look directly at a performer, left, center or right, can be mesmerizing. Images towards the front of the stage are rock solid. The speakers often disappear into the sound field which they create for your entertainment.

The Madake is usually a very neutral sounding cartridge, very middle of the road. It doesn’t sound like a Koetsu or a Clearaudio. The combo of the Madake and VIDA Prima moved the needle just one click toward Koetsu, with its wonderfully holistic family sound. The Madake and BMC MCCI phono preamplifier was one or two clicks towards the crisper, more electronic character. The VIDA Prima was preferred over MCCI for pure entertainment with the Madake cartridge. It does very well for critical listening, too. 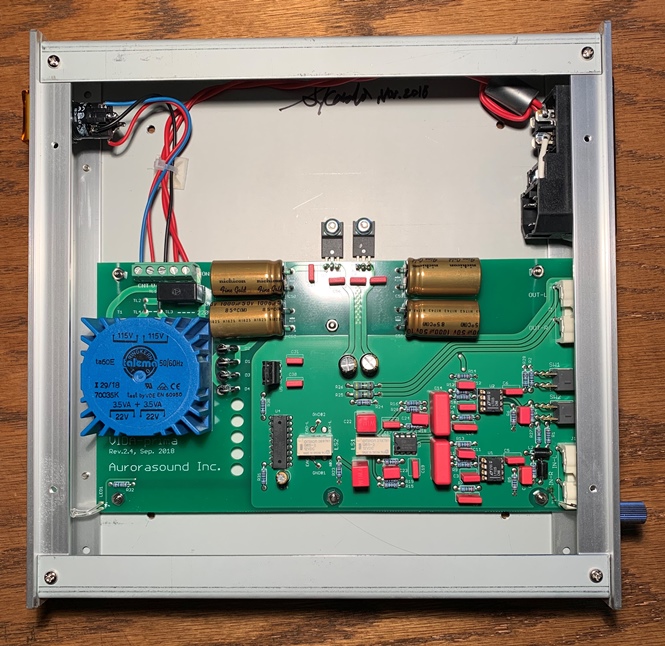 There is a very nice richness across the octaves, not sterile or bleached. The VIDA Prima reminds me of the $5,000 RCM Sensor II and is just mind boggling that the Aurorasound phono preamp costs only $1,200. As a result of this low cost, I suspect that many installations of the VIDA Prima preamplifier will never realize the potential of this excellent phono stage. Based on the current prices of cartridges, the $5,895 Miyajima Madake is moderate. The VIDA Prima can really deliver this high level of performance from a phono cartridge.

The VIDA Prima is very quiet with extremely low noise, approximately equivalent to the $10,400 Pass XP-25. The ultimate resolution is not defined by a so-called “noise floor”. Whatever signal is passing through the circuitry is your music, nothing added by the VIDA Prima. I felt no urgency to reinstall the ZYX cartridge and BMC phono stage. The VIDA Prima and Madake is a very musical and satisfying combination.

A comparison with a Rogue Ares phono preamplifier which was reviewed here in 2011 or the latest Musical Surroundings Nova edition would be interesting. This applies to any phono preamplifier reviewed on these pages. You can search using the tools on the right.

There are two upgrades in the Aurorasound phono preamplifier offerings: the VIDA and the VIDA Supreme. I hope to someday find out what these higher performance components can do. Watch these pages! The VIDA Prima is a very successful design that delivers a complete sonic picture with resolution that is the analog equivalent to HD video, often at 4k!

The VIDA Prima sets a very high bar for sonic performance and is an exceptional value at $1,200. This is a very truthful and enjoyable phono preamplifier. The VIDA Prima is an example of the best that phono preamps offer, adjusted perfectly for price. Especially if your moving coil cartridge performs well with a 47k Ohm load, the VIDA Prima could possibly let you delete the word “upgrade” from your thoughts.

This review would not have been possible without the kind and generous support of Alfred Kainz of highend-electronics, Inc. Thank you, Alfred!