There is no control design in the world of high-end audio that is better than the user interface of products by Balanced Audio Technology. The remote control of volume – even when the output is muted – is a great feature, especially for analog listeners. There is remote control of phase, too, which is very helpful in adjusting this often subtle parameter. Is the display too bright for your mood or room lighting? Just tap a button on the remote to dim or even completely turn off the display. Don’t remember what is plugged into “Input 1”? Change the name, from the remote control, of course. Need to drop the volume quickly, or turn it back up to exactly the previous volume setting after lowering the tonearm on a new cut? Just give the volume knob a quick spin and you’re set. However BAT products actually sound, you will never be disappointed in the way you use them. They are as reliable as gravity, so you can count on any BAT component to work when you need it to. 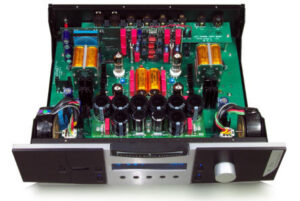 The VK-31SE preamplifier followed right behind the VK-300xSE audition elsewhere on 10 Audio. The common elements of both products are the chassis, front panel design and features, and number of balanced and unbalanced inputs. I removed the cover and took a good look inside. The main circuit board has four of the 6H30 tubes installed, but there are places on the board where two additional tube sockets could be soldered in place. The circuit traces and holes are there. Could this have originally been a VK-30 circuit board for use with its six 6922 tubes?

Both the ‘300xSE and the ‘31SE use the Sovtek 6H30 “Supertube” which is basically a 6922 on steroids. The two tube types are not interchangeable due to the higher current requirements of the 6H30. This tube is gaining wider acceptance among manufacturers:  Conrad Johnson is using it in the new ACT2 preamp, and Audio Research’s VT100-3 amp and LS25-2 and Reference 3 preamps also sport this tube.

This is interesting. Reading various posts on Audio Asylum and Audiogon, in addition to feedback I receive from you, there is a clear divergence of opinion about this tube. There is fairly widespread agreement that the 6H30 is not really tube sounding (rich and warm), nor completely solid state sounding (thin and clinical). Many people think the tube is an excellent compromise between typical tube virtues and solid state strengths. An equal number of listeners say it fails to capture the romance of tubes while leaning too far in the direction of solid state’s typically threadbare harmonic presentation. Does the VK-31SE take a step forward or backward?

The VK-31SE preamplifier was auditioned into an Audio Research VS110, Innersound ESL300, CJ Premier 12, Quicksilver V4, and a couple of other amplifiers whose visits were too brief to mention. Comparison preamps were primarily a Conrad Johnson Premier 17LS, CJ PV14LS, AES AE-3 DJH, a passive, and again, a couple of others that visited too briefly for comprehensive comparisons. The source was that old black magic: vinyl. It was spinning on a Kuzma Stabi Reference table armed with a Graham 2.2 and holding onto a Shelter 90x, Koetsu Black, or Zyx Airy 3X-SB cartridge. Cabling was Graham, Hovland, Acoustic Zen, PS Audio, Nordost, Tara, and Oritek, and power conditioning by Shunyata and PS Audio. Electron flow was, and is, by Xcel Energy (the local power company). The mention of the last “component” is a joke, a very small one.

There was a minor improvement in the sound of the ‘31SE when used balanced (midrange purity), but the preamp’s character was unchanged. Let’s take a quick trip through the frequencies and then see what it all means.

The bass has exceptional leading edge impact and weight. You will get that “punch in the stomach” sensation if your speakers are capable of great speed and air movement. The bass is also very deep and powerful, and not what you might expect from a tubed component. This outstanding dynamic ability extends through out the audio frequencies. This is one powerful sounding preamp! The midrange is clear and well defined, with a very good balance between harmonic richness and chiseled clarity. This character helps immensely with a soundstage that is large, layered, and precise. There is not quite the easy focus on the rear of the sound stage that the Premier 17 offers almost effortlessly, but when the musical fare originates in a studio, who cares?

The treble is clear and extended, but you probably know by now that BAT gear has a house sound that is a bit dark compared to most gear. This is not a real fault, just a different perspective. You get used to it, and compensate with synergistic components. I enjoyed just about any associated gear with the BAT, except Nordost Valhalla cables. This combination was far too dark and rolled off. In comparison, the Premier 17 preamp sounds much more linear in the upper midrange and treble without ever, no never, sounding bright or forward.

Trials and tribulations:  I found the most enjoyable sound when the BAT preamp was paired with Conrad Johnson Premier 12 amplifiers. And this tells a lot of the story of the strengths and weaknesses of the ‘31SE. The Premier 12, which are CJ’s last generation mono amps using four 6550 tubes per channel, are real sweeties. Very harmonically rich and oh-so smooth. Valium for the ears, or freedom from the normal audio crud we endure? They suck you into the music, your eyes close and you wonder after a while if you have been astral traveling to other realms, or hypnotized. Either way, I often “came back” to realize that the record was over. The Premier 12s make a strong argument to stop analyzing the componentry and give in to the joy of music.

The BAT leans in the other direction: quick, precise, incisive. The BAT also, (here it comes) has a degree of aggressiveness in the midrange and low treble that largely compensates for the noticeable smoothness of the Premier 12 amps. The 12s seem to have a grain filter, which effectively removes almost any trace of harshness. Kind of like a spam filter for your email. Please don’t get the wrong impression of the Premier 12s: they can resolve a gnat’s hiccup! They are capable of a huge soundstage, tight bass, and very realistic reproduction of brass instruments, to name just a few strengths.

I had been struggling for months to get the BAT preamp to really lock in and become the centerpiece for a totally involving music reproduction system. There were moments, but it just didn’t happen consistently. And when I inserted the CJ preamp late in the review period, I understood why.

If you have read about the later CJ gear, you know that the Premier 16, 17, ART, and ACT2 preamps are designed with no feedback. Feedback is used to fix problems. Typically, the output of a device like a preamp or amplifier is connected back to the input. This connection corrects errors. But we are grown ups and we know that there is a compromise with any solution. No free lunch, right? Feedback causes time distortion, and eliminating feedback results in a noticeable increase in purity, especially in the midrange and treble. Said differently, feedback sounds like gritty, grimy dirt. This is why the BAT preamp sounded good with the very smooth and sweet CJ amp. It was hard to relax with the BAT playing into any of the other amplifiers as there was always the nagging reminder that the sound could – should – be more refined and enjoyable.

OR…this sonic demerit can be blamed on the Sovtek 6H30 tube. This idea is hard to test because it is not possible to substitute another tube. Sovtek is the only maker of the 6H30. I tend to think this layer of harshness is partly due to feedback, and partly the tube, since most Sovtek tubes I have heard including 6922, 12AX7 and others, have all sounded a bit coarse. And that includes the Sovtek 6922s that are supplied as the stock tubes in the CJ Premier 17LS. I do know that the Premier 17 (with my favorite Bugle Boy 6DJ8 tubes installed), although having noticeably less impact but far better detail in the bass, is a much more enjoyable music maker than the VK-31SE, and I am very glad that it appeared to restore my audio sanity after several months of swapping components to try to get the ‘31SE to consistently pass the Zen Test. At a list price of $5,500, excellence in every parameter is a requirement.

The fun of this audio hobby is getting that magical synergy from a collection of boxes that makes listening to music such a compelling experience. I will sincerely miss the pleasure of using the BAT VK-31SE preamp with its perfect user interface and remote control. And I will be very happy for you if your search for synergy with this BAT preamplifier is rewarded with long term satisfaction.