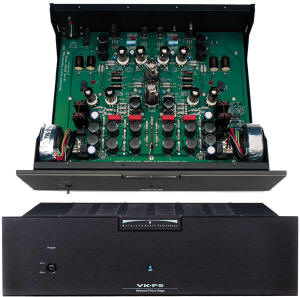 The Balanced Audio Technology VK-P5 phono preamplifier is a well built, reliable, and easy to use stand-alone phono stage. It was a sonic disappointment. It is not a bad sounding component, but it is clearly one made to sell for a certain price and then encourage its owner to upgrade to something else, such as BAT’s twice-as-costly VK-P10. After a couple of album sides, I was encouraged to stop listening, but I did try a couple of different cartridges to see if the P5’s performance was consistent.

The performance was even from the bass up, with no particular area being a stand out of either good or bad. Except for a few too-rare moments, it just did not convince me that I was listening to anything other than a stereo system. A one-word description of the P5’s sound would be “veils”. Even installing my fave 6922, Amperex Bugle Boys, failed to get the P5 to offer a level of transparency and musical involvement we should expect in a component that lists for over $2,000. The Tom Evans Microgroove+ is a much better phono preamp for a little less money.

The P20, which is the plug-in phono board used in the VK-300x integrated amp and several BAT preamp models, had an overall quality that was more in line with its price ($500). It is a serviceable phono stage and good for the occasional, but non-critical, vinyl listener. Yes, there are veils here, too, but we don’t expect miracles for $500.

One thing we look for in a well-designed audio system is matching the quality of each component to eliminate weak links. With the VK-300xSE integrated amplifier, a truly excellent component (review in progress), the P20 was clearly the weak link. The P5 and P20 performed on about the same overall level, with the P5 being just a bit better. However, I would not recommend that a P20 owner upgrade to a P5. There is just not enough of an improvement to justify the time or expense even though the P5 looks as if it should blow the P20 out of the water.

Here is something for you to ponder: the P20 sounded much better with a Koetsu Black than it did with a much more expensive Koetsu Rosewood Signature Platinum, a Dynavector XV-1s, or a Shelter 90x. Synergy? I know this: when I was between outboard phono stages and had the P20 installed, my CD player was used frequently. Normally, if there is choice between vinyl or CD, the CD player is left in the power saving mode: off!

It was obvious when the P20 was installed in my VK-300xSE. There was a noticeable decrease in the overall quality of the sound from any of the line inputs, such as the one used for CD. You have heard about removing a veil. Installing the P20 added one of those nasty veils that we are all so dedicated to eliminating. Since I normally use outboard phono preamps, the P20 was removed – a simple operation – after the evaluation was complete and the quality of sound from CD was instantly restored.

I suspect that with very careful system matching and a dedicated search for system synergy, the VK-P5 might be an excellent performer. It will take some trial-and-error, or good luck, to find the ideal combination. As for the P20, how it sounds is almost irrelevant because of the penalty it imposes on other sources when it is installed.

Bottom line:
1. Skip the P5.
2. Consider getting the P20 with a compatible BAT preamp or integrated, so you’ll have a backup if you ever need one. Don’t install it until needed, though. Or simply put your money into a high performance outboard phono stage.