Need a little shot of Vitamin E for a turntable that’s become somewhat stale and dull? Then let me recommend an inexpensive MC cartridge from the Swiss company Benz Micro. It’s the Benz MC20 E2. At a retail price of $200 don’t expect this one to be hand made by hunchbacked old European artisans on a Pinocchio workbench in Zurich. In order to crank out these inexpensive babies for your fine-tuned ears, Benz outsourced the fabrication to an automated plant in Japan. Fear not, in spite of a somewhat cobbled appearance, these are very well constructed cartridges made to fairly tight tolerances. For that matter, where can you find a MC cartridge for under $500 that won’t sound like the squealing pig noises the poor kidnapped man is forced to make in that memorable scene in “Deliverance.

Just the facts, maam. My model is the low output .5 mV, which works fine with the high gain stage of my Monolithic Sound phono preamp. Benz also makes a 2.2 mv version, if you need a little more juice. Don’t expect to run one of these without a MC phono preamplifier, it’s not that type of cartridge. Mine is set up at the high end of its tracking range at 2.5 grams (more about that in a moment). Mating this little bargain with the JMW-9 arm on my VPI Scoutmaster was no problem, nor would I expect you would have any issues either since the sight lines on the stylus are pretty good given its construction. It was an easy job to mount. 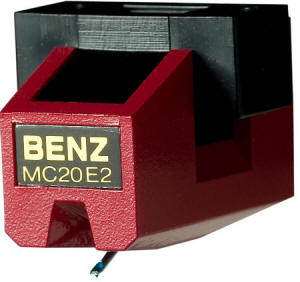 Precisely what characterizes this budget MC? Two words: lively and vivacious. (Etymology: Latin vivac-, vivax long-lived, vigorous, high-spirited, from vivere to live: lively in temper, conduct, or spirit.”) Unlike my Benz Glider, the MC20E has a bit of a bite to the sound, but nothing too serious considering the price. This is a cartridge with a lot of adrenaline, even if it is a bit lacking in refinement. It reminds me of the good old days in my dedicated listening room (AKA bedroom) where I grew up to the pounding beat of early 1970s program rock and other music which I rarely listen to today. In that long-ago era, I had an old Garrard turntable with a Shure cartridge and a “California Sound” pair of JBL speakers. In honor of this, on went a remastered Analogue Productions 180 gram LP of t-family “Fragile” by Yes. “I’ll be the roundabout”, indeed. This was a blast on the Benz. Wakeman’s organ trills hadn’t sounded this good in, frankly, 35 years. Even bizarre Yes-tunes like “We Have Heaven” seemed to make a little more sense through this overachieving cartridge. A very fun experience.

The strongest suit of the Benz is its liveliness. It’s not liquid like my Denon, or voluptuous ala the Grado Sonata. Vocals can get a big ragged at times. Nor does it have the extended and effortless upper treble ranges of the nearly four times more costly Benz Glider. But if you don’t mind a good roller-coaster ride on a beautiful summer night, I think this cartridge may be for you. Its great strength lies in its ability to add a jump factor to most types of music. And though it sounds tipped up in the upper mids to me – which left me reaching for the volume control on a not so well recorded version of Tommy Dorsey and Frank Sinatra hits from the 1940s – I really didn’t mind. It was just too much fun to hear Dorsey knock off those high notes even if they were a touch ragged on top. This is the little deuce coup of modern cartridges, a real thrill ride for your LP collection. Though I might not use this on a megabuck ‘table, I bet the MC20 would shine on some of the inexpensive Regas, Music Halls or Pro-jects out there. (This cartridge might be a very good match for a tube phono preamp, one with a warm or rolled off character. – Ed)

In particular, the you are there nature of this little guy is quite endearing. Though there always seems to be some extra etch to the sound, it doesn’t interfere with the overall balance of the Benz. It’s as if someone turned up the stagelights a notch; you get that level of illumination here. In keeping with my ’70s vibe, I put on the eponymous Elton John album and was impressed by “Your Song” and how bold the string section sounded.

Downsides are few, though this isn’t one of the best tracking cartridges around. You can definitely hear some breakup on heavily modulated passages on LPs. I felt that 2.5 grams was optimal tracking weight on my Scoutmaster, and the MC20 is quite sensitive to proper azimuth setting, too. If these are issues, you might want to plunk your $200 elsewhere. Still, I liked the results I got.

In sum, the Benz MC20 E2 is a very fine cartridge for the money. It will surely put a smile on your lips and might even lead you to rediscover some old classics or find new, great vinyl as well.

Thanks to 10Audio for reviewing the Benz MC20E2-L low output moving coil introduced at the beginning of this year. The original MC20E2 is the high output version ( 2.5mV) which was introduced in 1992. Benz Micro is located about 40KM north of Zurich and the majority of its work force are women. Benz supplies the manufacturing company in Japan certain parts for the assembly of the cartridge. Benz Micro owner/designer Albert Lukaschek personally listens to and tests every cartridge before it leaves the Swiss factory. This process is very time consuming. Our thanks to every Benz owner, especially those that have to wait patiently to receive a cartridge from Switzerland, as they are so popular and highly sought after.

Albert Lukaschek believes the supplied spacer is mandatory in all tonearms given the light 4 gram weight of the MC20E2-L. Paul found that the extra 3 gram mass of the spacer is key to the MC20E2-L to perform in his VPI JMW-9 arm. Regarding tracking force, VPI typically recommends tracking in their arms at the higher end of cartridge’s suggested range. The MC20E2-L is a relatively low compliance cartridge at 10 in both the vertical and horizontal plane, making it more sensitive to anti-skate settings and tonearm bearing characteristics. This supports Paul’s findings.

Paul mentioned via email that he tried a few different loading values (without any further specifics) and settled on 47k ohms. With the MC20E2-L’s 35 ohm internal impedance and calculating tonearm internal wire and phono cable resistance, typically any loading higher than 350ohms would be in our recommended range. Resistive loading is ultimately the choice of the listener. Running the MC20E2-L at 47k ohms could over accentuate the upper octaves.