I do not want to make the brave new world of digital music appear more complicated than it is already, but this investigation into the audio quality of the Berkeley Alpha DAC Series 2, from Berkeley Audio Design, LLC, highlights the uncertainty that should be attributed to almost any conclusions for almost any digital component from almost any source. For these auditions, it was a simple matter to compare apples to apples, as it were, and to reach valid conclusions; however, the ultimate performance of the Berkeley DAC remains unknown. Keep reading and you will understand.

The impetus for this review was to compare the latest version of the well-regarded Berkeley DAC to my long-term reference, the Prism Orpheus Digital Interface. The timeline of that product review and those observations are integral to fully understanding the discussion below and I encourage you to read it. The 2009 Orpheus review concluded with the statement, “Technology is moving forward continuously and it is certain that the overall performance of the Orpheus will be bettered, and sooner rather than later. At this time, I know of nothing else in the marketplace that can be considered as competition. The Prism Orpheus Digital Interface offers LP Replacement Quality™ sound and earns 10 Audio’s highest rating.” In the interest of staying current and employing a relevant reference system, I bought a new $4995 list Berkeley Alpha DAC Series 2, hereinafter called “DAC S2”. 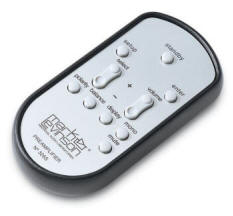 Some of the technical highlights of the DAC S2 include enhanced clocking and isolation, upsampling up to 192kHz, AES, SPDIF, Toslink and BADA inputs, phase reversal, remote volume control, dimmable display, HDCD decoding, and both balanced and unbalanced outputs. Please use the manufacturer’s link below for complete specs. The new DAC S2 received 400 hours of break in for the SPDIF input before auditions began. And then a problem became apparent.

My music server has a current Intel motherboard with H77 chipset and a low power i3 processor. The sound quality through an inexpensive TI-chipset PCI-E Firewire card into the Orpheus is outstanding. The Berkeley does not have a Firewire connection, so the first step was to listen to both the DAC S2 and Orpheus via coax SPDIF with the signal taken from the Intel motherboard’s Realtek High Definition Audio header. I greatly prefer the sound of CDs, which are ripped into JRiver Media Center as WAV files at their Redbook bit depth of 16 bits and resolution of 44.1kHz, when upsampled during playback at a 4 times whole number multiple to 176.4kHz. Upsampling these 44.1kHz files to 192kHz, a non-whole number multiple (4.35374…) seems to introduce an atonal “phasey” character that just sounds wrong. This anomaly has been consistent with every DAC I have tried. But while JRiver is very happy upsampling to either 176.4 or 192kHz, and the Orpheus will automatically follow JRiver, Intel’s on-board Realtek digital does not have 176.4kHz capability. 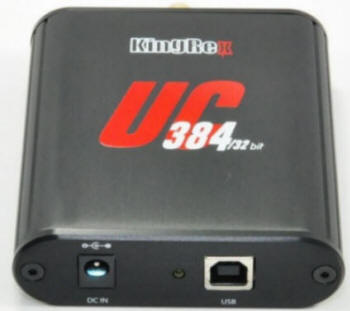 Enter the KingRex UC384 USB to SPDIF digital to digital converter from US distributor Moon Audio. The $295 UC384 can convert a USB input to AES, IIS, or coax SPDIF at up to 32 bits and 384kHz. It provided two welcome features:
1. The KingRex can accept 24/176.4 data rates, thereby providing the best sounding setting for CD playback that is missing from Realtek’s digital conversion.
2. At any sample rate also provided by the on-board Realtek, the KingRex sounds much more refined, less grainy, and a bit more dynamic than Realtek. The KingRex UC384 provides a significant upgrade to the sound of the music computer’s on-board digital audio processing. When using SPDIF, the sound of both the DAC S2 and Orpheus improved noticeably with the KingRex converter instead of Realtek digital. As such, the UC384 is a recommended upgrade to a motherboard’s digital processing. Experimentation with different USB cables is encouraged because out of several on hand, including one supplied by Moon Audio, a generic computer grade cable seemed to be the most harmonically correct.

Compared to the sound of the Realtek on-board digital converter, the KingRex UC384 does not sound cold and hard, provides a much more lifelike and complete presentation instead of like listening to each separate track in a studio recording, has a deeper and far more natural soundstage, more natural sibilants, tighter bass and sweeter high frequencies. It did not take long at all to have a strong preference for using the UC384 rather than Realtek’s SPDIF coax digital output.

Now a fundamental problem with digital equipment reviews is becoming apparent. If the motherboard’s Realtek digital solution sounds mediocre, and the KingRex converter is much more musical, then we have persuasive evidence that all digital converters do not sound the same. Berkeley Audio Design also offers the Alpha USB, a dedicated USB to SPDIF converter that lists for $1800. I am going to make a big assumption here that the $1800 Alpha USB probably sounds better than the $295 UC384, which means, ipso facto, that I did not hear either the DAC S2 or the comparison converter sound their absolute best via their SPDIF inputs.

But that doesn’t really matter because the main purpose of this review was not to provide definitive enlightenment to you (sorry) of the Berkeley DAC S2 but to tell me if the Orpheus is still as wonderful as I wrote in the review over three years ago. (I am a hopeless audiophile. Knowing that a superior product exists usually reduces the wonderfulness of whatever is in my equipment rack.) So given all this background, we can now compare the sound of the Berkeley Alpha DAC Series 2 to the Prism Orpheus at identical sample rates using their SPDIF inputs, apples to apples. 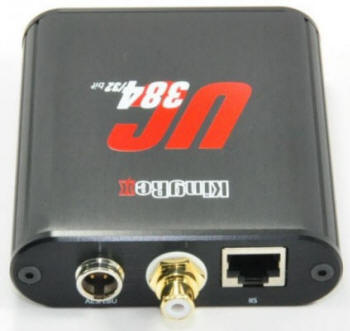 The DAC S2 at 176.4 kHz sounds very similar to the Orpheus at 44.1 kHz. (Higher numbers are better.) An analogy would be two cars, one with a 500 horsepower V12 engine barely working hard at 100 miles per hour (Prism) and another car with a 150 horsepower 4 cylinder engine pretty much maxxed out at that same 100 MPH (Berkeley). Run both converters at 24/176.4 and, as should be expected from the Orpheus review, the sound of the Orpheus is clearly superior. The same result was heard when listening to native 24/192 music files created from LP recordings, using both DACs at 24/192: the Orpheus offered a noticeable increase in harmonic depth, soundstage size, midrange warmth, and upper frequency purity which resulted in greater listening involvement. Specifically, voices had more texture and body, and especially with female singers, more air and sweetness even though the DAC S2 seemed to have slightly better upper treble extension and crystalline clarity. At identical sample rates, the Berkeley’s soundstage depth was approximately half that of the Prism’s.

The differences were similar to listening to a fine tube amplifier with greater continuity of tonal character. The DAC S2’s particular character offered slightly tighter bass which was a bit leaner and just a hair more powerful than Prism’s. It also held a small edge in resolution in the lower bass, and had a slight relative forwardness in the upper midrange that made speech a little more intelligible.

Additional listening notes:
– The DAC S2 with KingRex USB-SPDIF sounded better than Orpheus with Realtek SPDIF.
– In these tests, the Orpheus gained an order of magnitude improvement when used with its Firewire connection instead of SPDIF. This proves nothing.
– Even with output levels matched with a calibrated digital volt meter, the DAC S2 sounds a little louder than the Orpheus.

SIDE NOTE: The Orpheus review noted the early challenges in understanding and using the studio oriented interface. After that initial period, there is no problem, stress, or difficulty operating the Orpheus. In fact, it works so well with JRiver that I hardly ever touch the control panel. Is it different from home audio controls? Yes. Is it difficult to use? Not at all!

I would hope that the DAC S2 plus Berkeley’s Alpha USB interface would sound at least as good as the Prism converter, although the Alpha USB would similarly elevate the Prism’s SPDIF performance. The total cost of the Berkeley package would be $6795 vs. a Prism Orpheus at $4450. Given this price difference, the full capabilities of the Alpha USB should be included in the Alpha DAC for competitive reasons. The price difference could easily finance your new “music server” which should, if your results are similar to mine, sound better than any CD player while offering far greater convenience.

Comparative ratings of digital components are not difficult. As we have seen, absolute performance ratings can be elusive given the vast differences in the sound of associated gear. Under the conditions of this audition, the Berkeley Alpha DAC Series 2 did not offer sound quality that would threaten the reference-level status of the older, lower cost digital to analog converter. When listening to high quality 24/192 music files, the Berkeley Alpha DAC Series 2 can provide a very good listening experience.

My thanks to Drew Baird at Moon Audio for loaning the KingRex US384 converter. This review would not have been possible without Drew’s kind and timely assistance.

I would also like to thank Larry Wall at Listen Up Audio in Denver for his help acquiring the Audioquest Firewire cable.