The idea of using a step up transformer between a moving coil phono cartridge and an active phono preamplifier seems like an ideal solution for boosting the tiny voltage from the cartridge. A step up provides needed gain for the microvolts produced by a phono cartridge, and also provides the proper load for the cartridge’s impedance. Step up transformers typically provide from 10dB (3.16 times the voltage) to about 30dB (31.6 times the voltage) of gain. (Source: http://www.mogami.com/e/cad/db) Moving coil step up transformer gain is usually noise-free and provides the active phono stage with a higher level signal, which can be similar to the output of a moving magnet cartridge. This has obvious application for MM phono stages which do not provide enough gain for a moving coil cartridge. 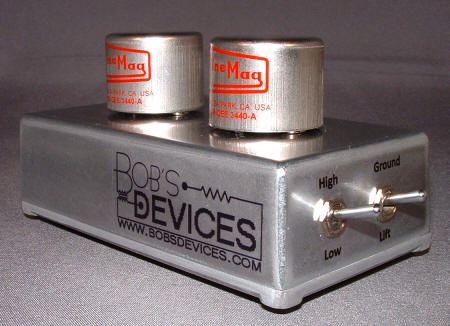 Many phono preamplifiers, the excellent Conrad-Johnson Premier 15 included, sound much better when they are given an input voltage higher than their specs might suggest. This can reduce the level of noise that is heard from your loudspeakers, increase the dynamic impact of your music, and provide a quality of sound that maximizes the harmonic resolution of your phono cartridges. Of course, all step up transformers have some sound of their own. This can include the addition of upper frequency grain and a loss of extension and power in the lower bass and upper treble. More expensive step up transformers typically minimize or eliminate these errors.

Moving coil cartridges usually benefit from having a proper load. This is the impedance (resistance) of the device they are connected to. Interestingly, loading by a step up transformer seems much less critical than loading by resistors. In my experiments with a Koetsu Urushi that I owned several years ago, it was apparent that 100 Ohms was the correct loading value and not 95 Ohms nor 104 Ohms. However, with step ups, there is much greater tolerance. Some step up transformer-equipped phono stages even go so far as to dispense with adjustable loading entirely. My current assumption about loading is that when using resistors, 20 times the coil’s DC resistance is probably going to work fine. With a step up, any value from about 8 to 12 times the coil’s DCR will be acceptable.

Aside from the technical aspects of using a step up transformer, something special seems to happen to the sound when a good one is installed. First, the apparent physical depth of every instrument and voice appears to grow and become much more 3-dimensional. Singers have a greater sense of having a physical body and less of only a voice emanating from an undefined point in space. Where most audio systems are proficient in presenting sonic images left-to-right between the two loudspeakers, step ups can add depth of the image to that competency.

Harmonic trails and low level resolution, two sides of the same coin, often increase as well. This may relate to the observation above regarding improvements realized when a phono preamplifier is presented with a higher voltage input signal. Whatever the reason, audio quality often improves. Voices have a richer and deeper resonance which makes them sound more alive. Female voices become sweeter and more enchanting. Cymbals ring with more of a metallic sheen that sounds less like white noise. Almost any step up transformer offers these benefits to some degree in the middle frequencies. Higher quality step ups include improvements in the lower bass and upper treble, too. The former becomes more powerful with a greater ability to hear individual bass strings vibrating and a clearer impression of the resounding slam of a bass drum head. The upper treble becomes more pure and open, with a wonderful sense of freedom and airy lightness that is one of the prime differentiators between the sound of live performers and that of high quality recordings. The challenge, as for any other category of component, is to find gear that has all of the best qualities, and in the real world, meet some budgetary requirement.

Bob’s Devices Moving Coil Step Up Transformer is based on the highly regarded CineMag CMQEE-3440A transformers, which are each about the size of a $4 stack of quarters. Two are required for stereo. The nicely finished device is available on their Web site for $395. As you can see in the images, there is a switch to select between LO (37.5 Ohms) and HI (150 Ohms) input impedance and another switch for ground lift. The Gain switch is also the loading switch. With LOW Gain, you use the 150 Ohm transformer tap to get 24db (16x) gain and with HIGH gain, you use the 37.5 Ohm transformer tap to get 30dB (30x) gain. I was confused by these loading values because it seemed contradictory to the more standard loading recommendations of 100 Ohms for low DCR moving coil cartridges such as 5 Ohm Koetsus or up to 47k Ohms loading for higher DCR value cartridges. Well, forget all that because transformer loading is not directly comparable to resistor loading. And as mentioned above, transformer loading is much less critical than resistor loading for optimal performance. Unless you have a very unusual cartridge, which Bob will, with unending kindness and patience help you identify before or after your purchase, one of these two values should work very well. 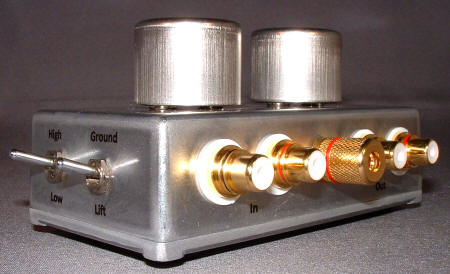 The ground lift switch removes the enclosure of the transformer from the signal path. The proper position is the one that works best in your system. Grounding is important at these low voltage levels to minimize noise and hum, and I found that the last bit of hum, already very low, was eliminated by connecting a large ground wire between the step up and my phono preamp, in addition to the ground wire from my tonearm to the step up. The turntable is a 2009 SOTA Cosmos IV Vacuum in gorgeous rosewood sporting a TriPlanar VII u2 tonearm. Phono cartridges include a Miyajima Shilabe, which is still a reference at its one year anniversary of joining my system, and a Denon DL-103R. The phono preamp is either a Manley Steelhead or a Prism Orpheus AD/DA converter with built-in RIAA filter and over 60dB of gain. Line level preamplification includes a Sonic Frontiers Line 2 SE+, a Marantz SC-7S2, or, briefly, a Wyred4Sound ST SE. My (again, one year in-residence) Marantz MA-9S2 power amplifiers pushed beautiful music into the Merlin TSM-MMe or the very fine Dali Euphonia RS3 loudspeakers, augmented in the bass with pairs of either JL Audio f112 or Velodyne Optimum 12 subwoofers. Interconnects are Mogami; speaker cables are Audience Au24 E or Element Apollo, both single wire. Power products include the PS Audio PowerPlant Premier which allows my system to sound the same at any time of day or night and is truly indispensable for reviewing purposes and also for quality control of digital recordings. Power cables include Audience PowerChord E, the new and excellent PS Audio PerfectWave AC-10 and the not-quite-so-new but also excellent Element Stealth ES cords.

Which brings us to the Bob’s Devices Moving Coil Step Up Transformer and the fact that I can’t possibly tell you how it sounds so don’t ask thank you very much. You may think I am making an attempt at humor (colloquially: “jerking your chain” or “wanking your doodle”) with this statement, but it may be closer to the truth than what follows. Bob’s Devices Moving Coil Step Up Transformer, hereinafter called simply “Bob’s Step Up”, has very little character of its own. It sounds differently, meaning it seems to have different sonic values, depending on the other components in the audio chain. This is good.

With two different sounding cartridges and two similar sounding but technologically WAY different phono stages let me suggest the following: The matching of components for optimal sound, also called “system synergy”, is the only realistic goal at this level of performance. Applying terms such as “better” or “worse” is largely irrelevant. With Bob’s Step Up used between the Miyajima phono cartridge and the Steelhead, there was just a very small added bloom or roundness to the bass, with no change in bass detail or power. There is a similarly slight sweetening to the upper treble, and cymbals were just slightly more metallic and realistic, if a bit less crisp and biting. The depth and volume of the performance space also grew slightly. Or not. This is because, you must remember, that adding a step up transformer requires the addition of a pair of interconnects to the signal path. So whatever sonic character traits I hear and attribute to Bob’s Step Up automatically and unavoidably includes the sound of about 20” of interconnect cable and its connectors.

Now let’s look at the sound of Bob’s Step Up with the Denon DL-103R and I will tell you some things that stunned me in the discovery. The Denon has some traits that make it a true high end phono cartridge and also something that knocks it down a peg or two. It has excellent and powerful bass. From the mid-midrange up to the upper treble it has a layer of grain or haze, or, to put it another way, it is not as transparent and free from character, as some more expensive cartridges. But for its price (and above), it sounds very good, indeed. That is why it remains in my small stable of reference gear. So I tried it with Bob’s Step Up. My jaw did not hit the floor, mostly because I am a mammal. But I sat stunned, nonetheless. This is a combination that, for many evenings, time after time, is able to far transcend the cost of the cartridge and transformer and provide true high end sound. Maybe it is the slight sweetening of the upper frequencies that I noticed with the Shilabe, maybe there is a special “lock” of impedances, but the Denon’s characteristic haze is reduced to barely a hint of its original obvious presence.

The Denon’s bass lost a touch of dryness to become fuller and more resonant (these often seem to go together) and the depth and overall volume of the recording hall grew in a small but easily noticeable way. The combination of Bob’s Step Up and the DL-103R was consistently musical, enjoyable, and, truth be told, darn near faultless. The closest similar sounding cartridge (without step up) that I recall, and one that I was repeatedly reminded of, is the legendary Koetsu Urushi. But Bob’s Step Up with the Denon has better bass. What more can I say? Bob’s Step Up plays far above its affordable price would suggest. I’m calling it “Bob’s Devices Cine-Magic Moving Coil Step Up Transformer”.