The Cary Audio DAC-200ts, $3995, replaces the well-received DAC-100 and DAC-100t digital to analog converters. Where the DAC-100 is all solid state, and the DAC-100t offers a vacuum tube output stage, the DAC-200ts includes both technologies and the user chooses between solid state or tube outputs with a push of a button. Other upgrades over the DAC-100 include a 128-bit DSP processor, upsampling up to 768 kHz, clock output, PCM up to 32 bit 384 kHz as well as native DSD 64, 128, and 256 audio. The variable output lets the DAC-200ts function as a digital preamplifier.

There are a number of reviews of Cary Audio products here on 10Audio, all very positive. The Cary DAC-200ts has been in the system for almost a year. During this time, Auralic Vega, Exogal Comet, Cary DAC-100t, Lynx Hilo AD/DA, and PS Audio DirectStream DSD digital to analog converters, and the Spread Spectrum Theobe II preamplifier with on-board DAC, have all had their days in the sunshine. The Vega, and Comet DAC to a lesser degree, offers a fast and highly detailed sound. The DirectStream DAC is quite neutral and musical although hard to categorize because its upgradable software can change its character directly. The Cary DAC-200ts is still in my system while the other DACs have moved on. Here’s why.

I very much enjoyed listening to the Cary DAC-100t, finding it offers a wonderful sense of human performers but lacks the last word in high frequency resolution and extension. The Auralic Vega makes a positive first impression with its speed and detail while occasionally delivering the humanness and harmonic depth that transcends reproduced and says “real”. It is on the cool side in the warm-to-cool spectrum. The sample of the Comet that I had was found to be defective due to some programming anomalies, so a re-audition is due. The digital converter section of the Spread Spectrum Theobe II preamplifier came closest in sound character to the Cary DAC-200ts, although the Cary DAC performs at a higher level overall. 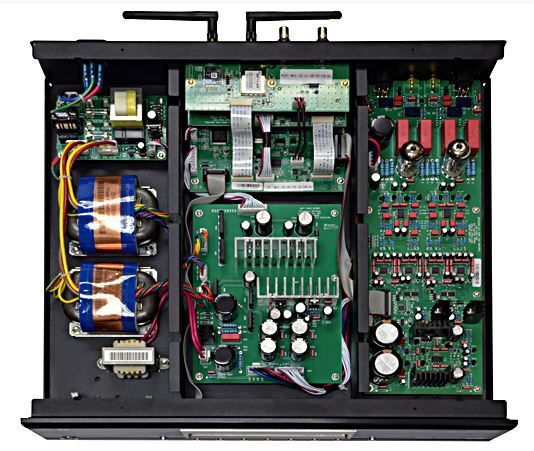 From these comparisons, and much more importantly, when listening to the DAC-200ts playing my own 24-bit 192 kHz LP recordings and comparing the DAC and LP directly, I find that the DAC-200ts is hard to fault. These recordings were made using either a Prism Orpheus or Lynx Hilo ADC/DAC. No, the LPs and digital recordings do not sound exactly alike, nor would I expect them to. But here’s the important thing. Listening to my digital recordings through the Cary DAC-200ts provides a listening experience that is equally enjoyable and immersive as listening to the LPs. Even the lower resolution CD rips have a remarkably similar sense of continuousness and smoothness as LPs so readily deliver. This is outstanding performance.

Experimenting with upsampling is interesting and informative. I rip CDs to WAV files at their native 16-bit 44.1 kHz resolution, preferring to upsample on play back. There is no value to upsampling the rip, as it just takes up more storage space. Plus, upsampling on playback affords the opportunity to take advantage of improvements in software and hardware, instead of being “stuck” with whatever equipment you used to upsample that music originally. The Cary DAC could handle these 44.1 kHz CD files upsampled by JRiver Media Center 8x to 352.8 kHz, but they consistently sound better upsampled just 4x to 176.4 kHz. The 24-bit 192 kHz LP recordings sound best upsampled 2x to 384 kHz. At that rate, LPs are on the edge of being unnecessary.

The solid state output of the Cary DAC was regularly preferred over engaging the two 12AU7 tubes. The vacuum tubes – which are always energized – were slightly less resolved sounding in the mid to upper treble, and didn’t sound as consistent and linear as the frequencies rose to the upper treble harmonics. I tried the stock EH tubes and also some NOS 1960s matched cryo Mullards. The EH tubes reveal a somewhat laid back but clear and extended sound. The Mullards are a bit more open and resolved, closer to the sound of the solid state output stage.

I found the solid state output stage more believable than when listening with either make of tubes. This was noticed on Fleetwood Mac’s “Caroline”, where Christine McVie’s voice was more tangible and present. With solid state, the beginnings of notes were more pronounced, offering a more energetic, toe-tapping, get-up-and-boogie feeling with certain music. This is not to say the sound with the tubes engaged was dull or boring. You will have a preference.

There are a good number of digital to analog converters that do a fine job of recreating the sound of a human voice. The Cary DAC-200ts goes one important, you could say “vital”, step further. It delivers the person who created the sound, a complete sonic picture into the smallest recesses of a recording. The bass is deep, detailed and rich giving a firm foundation to the music. The midrange has wonderful fullness and refinement, including the best of “tube sound”, in the best sense of the term. High resolution music files do not sound digital. They sound like LPs with no surface noise, clicks or pops. This fine ability across the musical spectrum elevates the Cary DAC-200ts above the competition.

There might be something of a lack of audiophile jargon presented here to describe the various sonic achievements of this Cary Audio component. When digital joins the peak level that is reserved for LPs and master tapes, extensive analysis seems unnecessary.

The DAC-200ts weighs a solid 28 pounds with attractive high end metal work and user interfaces. The firmware is field upgradeable with a storage drive – plugged into a Mini-USB jack – using with a well-documented procedure. The DAC has multiple digital inputs including AES/EBU, coax and Toslink, and balanced XLR and unbalanced RCA outputs. It includes a 12V trigger which works very well in my system, and four 2 channel AK4490EQ DAC chips. The feature set is extensive and I point you to the link below for a more complete understanding of what’s “under the hood”.

The smart phone app lets you change several control settings, including volume, from your device using a wired or wireless network connection. Your smart phone or tablet can be your source of music with the usable, but lower quality Bluetooth input. Control is possible from the front panel or the substantial metal remote control, but after setting the USB input, JRiver told the DAC-200ts what to do and the Cary DAC unfailingly obeyed. In a simple system, it is truly a “set and forget” component. The variable volume control provides a very capable preamplifier function. When using a conventional preamp, the variable volume is used to set the “offset level” to match the output level of the Cary DAC to your other components.

The ongoing decision to retain a component as a reference is often made using the “Goldilocks Principle”: avoiding too much or too little warmth, or too much or too little detail or other particular character, and hopefully finding THE ONE that is “just right”. In this case, as in most other areas of audio, this means a presentation that is completely neutral and without identifiable character. The highest compliment I can pay to an audio component is that I don’t think about it. The Cary DAC-200ts lets me forget what is making the music and give complete attention to the performance. Technically state of the art and sonically accomplished, the DAC-200ts delivers a listening experience of the highest order.