This was a challenging review to write. Not for some of the reasons you might imagine: faulty equipment – none!, system changes – frequent but not the issue; available time to listen to the amplifier – always in too-short supply; etc., etc. No, the challenge was deciding if the review would have any value considering the “law” that would be broken in the process. I confess: I broke the BIG ONE, and your honor, I would do it again without hesitation. 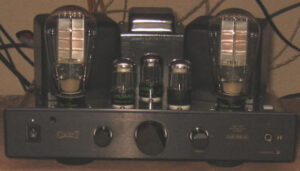 The Cary 300SEI came with Western Electric 300B directly-heated triode tubes, which many of you consider to be the best 300B tube, and maybe even the very best audio vacuum tube ever made. I see the attraction: this tube does the human voice wonderfully. And here I use “wonderfully” with the emphasis on “wonder”, because it does create a feeling of wonder that an electronic device can honor the human voice so well. The sweetness of female vocals, the depth and power of male vocals, and in fact, the expressiveness and sheer communication of anything in the midrange will leave a lasting impression on anyone who hears this electronic instrument.

After a short time, I wanted the same sense of completeness in the bass and treble, too. You don’t even have to read down the page to know what happened next. Non-sinners, shield your eyes, and ye shall see no evil.

Still with me? Good. There was a post on Tubes Asylum that the weaknesses I was attributing to the amplifier were probably due to the installed 300B tubes. So I changed them. There you are: invalid review. (I won’t even tell you about power cords.) Moving along, then, here are the substitutes:  WE300B, VV300B, and Sophia 300B. This is the absolutely perfect Goldilocks and the Three Bears story. Remember it? Goldilocks is lost in the woods and finds a cottage. Three bears live in the cottage, but they are not home at the moment. (I always thought that was a little too convenient for Goldilocks, for she surely would have been eaten, but it’s a children’s story and allowances must be made.) She goes inside and finds three bowls of porridge, and being hungry, helps herself. After sating her appetite, she goes upstairs for a nap and tries out the three beds she finds there.

OK folks – here’s the tube part. The Western Electrics were too soft, having indistinct bass and highs that did not reveal a significant amount of information. GREAT mids; poor bass and little air and extension on top. The VV tubes were too hard, and while their bass was much deeper and tighter than the WE tubes, the upper midrange had some stridency and hardness that made their use in this amplifier a combination to avoid. So that leaves the Sophias. I’ve heard that JJ makes a good 300B, and Cary is now offering a 300B under their name. These were not tried. The Sophia Meshplate 300Bs, to return to the nap-time adventures of Goldilocks, were just right. Let me be clear. I do not mean that the Sophias were the best overall compromise, or did the least wrong of the three tubes, or simply won a 3-way shoot out. The Cary 300SEI partnered with Sophia 300B tubes offered musical bliss. The pairing had excellent bass (for a tube amp), the wonderful midrange of the WEs, and airy and extended highs that were as close to perfect as I could want.

I found the Cary 300SEI with Sophia 300Bs to be a terrific combination. It offered exceptional sound staging, with plenty of depth and very specific images of individual musicians. The resolution in the treble was extraordinary. I don’t ever recall hearing a bell ring with such presence, or having the harmonic trail last so long. If you are looking for great pace and timing, this amplifier does it an order of magnitude better than any other amplifier I have heard. I suppose that with only one output device per channel, the opportunities to screw up the signal are at the absolute minimum level possible. Within its power envelope, which may surprise you at how much volume 15 watts can provide, the dynamic performance is stunning. I’m sure that the exceptional timing is the reason that the dynamic abilities of the Cary are so impressive. Musical events happen NOW and then are gone. No blur. The overall presentation is completely involving.

The Cary 300SEI is a great amplifier, and even better for being an integrated amplifier. I tried it with a couple of preamps, using the Cary’s volume control at different settings, and always preferred to use it as an integrated amp. Talk about removing a veil? How about removing a component and enjoying the resulting increase in transparency? The integrated amplifier concept seems to have considerable merit, if executed properly. Congratulations to Cary for making the preamplifier component obsolete.

There is only one negative factor to consider, and it is not the amplifier’s fault, but yours. You might argue that it is the loudspeaker’s fault, but you bought them, and after all, YOU are the adult here. With only around 15 watts, the 300B-based SET amp will need a very sensitive speaker to be able to play at realistic levels. My 95 dB Fostex speakers worked very well most of the time, but I occasionally pushed the “up” button on the remote to increase the volume and found it was already pedal-to-the-metal. But that’s me in my room, and YMMV. If there is enough power for your system/room/brain, then I can not recommend this amplifier any more highly. It is absolutely wonderful. There is that word again.

Side note: I ordered the Sophia 300Bs, platinum match with black bases, directly from Sophia Electric, and Sue was an absolute delight to deal with and talk to. Just thought I’d mention it.