This is a preliminary review (final thoughts below). The Cary 500MB power amplifier is such a superior music making audio product that I feel compelled to post an early report on my experiences with these wonderful amplifiers. The review could also be subtitled “The Golden Age of Tubes” because finally, with the Carys, the promise of solid state has been realized for a power amplifier.

What does this mean? Before today, the old “tube vs. solid state debate” raged on, pitting tubeophiles who cherish the warmth, harmonic development, and high resolution of tubes against their audio brothers and sisters in the “sand camp” who value the dynamics, high power, control, and extension of solid state amplifiers. The debate is over! This amplifier should go a long way towards bridging the gap between these two valid viewpoints.

Notice: NO audio product will be “the best” in every system will all associated gear. There are no universal products that will please everyone. Got it? 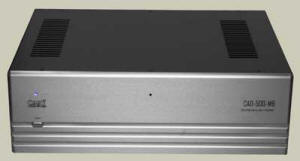 There is a lot to be said for high power. In the 70’s and 80’s, many power amplifiers were specified with two power ratings, continuous and peak. The continuous rating was close to what we see today as the power rating, while the peak (also called dynamic power) is the momentary power that the amplifier is capable of delivering into an actual speaker load. Using an amplifier with high peak power, or even better, high continuous power gives a few real benefits:

These are real benefits that will have real, audible value in any sound system. With 500 watts per channel into 8 ohms and 1000 watts into 4 ohms, the Carys have, for all practical purposes, unlimited power. And that is a very good thing! The 500MBs also include both balanced and RCA inputs in a manageable 45 pound package. The 1.4 volt input sensitivity makes them suitable for use with passive preamps: I was rewarded with outstanding sound when the 500MB was fed from a Placette Passive Linestage. The price of admission is a reasonable $6,000 per pair. They are available with silver or black faceplates. The blue power-on LED, thankfully dim, looks very good with the black background.

Power without beauty is common in the audio game, so without beauty – the ability to present music as art, and not as just sound – we would be discussing just another failed attempt at a goal that designers of solid-state amplifiers have been seeking for about 50 years. With the Cary 500MB, the summit has been reached and the flag of victory firmly planted. High end amplifiers in the future will be models that meet or exceed the exceptional performance of these amps, just as tube designers have been doing for years with better parts and tweaked circuit designs.

From Dennis Had’s description of the 500MB development process:

“First, I started with the same power supply and power transformer that ran all 5 channels of our Cinema 5. Then I proceeded to implement the basic emitter follower design that was winning all the awards. I chose direct coupled FET inputs driving bipolar Sanken 50 ampere, high current, wide bandwidth bipolar output devices. The amplifier also needed to be true fully balanced design to match some new preamplifier designs that I was completing. The basic prototypes were sounding much too good for our listening room at the factory. I took them home and I was now listening in my own living/listening room. The CAD 500 MB’s had me on my hands and knees with clip leads, various parts and a soldering iron. My wife knew this was turning into a serious design and listening project. The listening room looked like a parts depot or an electronics warehouse! Picture this scene if you can, a pair of the new raw prototype CAD-500 MB’s along with a pair of CAD-211 Anniversary Edition tube amplifiers sitting in line with a pair of CAD-805 Anniversary Edition tube amplifiers. I was into serious listening comparisons with no holds barred. I almost wore out a few of my records in the process.

“To speed up this tale of high power corruption, within a few weeks I had become very fond of the sonic presentation from the CAD-500 MB’s. The final design challenge was to increase the sound stage depth and have the midrange bloom a bit more. Well, I must say I achieved success! The CAD-500 MB amplifiers have a deep sound stage, a glorious midrange along with enough serious, high current output power to shake the house.”

If you keep in mind that the side-by-side references during the development of the 500MBs were the wonderful CAD-211 and -805 SET tube amplifiers, you will appreciate the achievement that Dennis attained in his new amplifiers. Comparing them – remember that the 500MBs are “monoblocks” – to a Conrad Johnson Premier 350 results in a definite preference for the Cary’s more even harmonic presentation in the treble. Where the Premier 350 sounds a bit lean in the upper frequencies, the Cary’s truly tube-like harmonic presentation is very satisfying. The Carys also have a bit more harmonic completeness in the bass, although the CJ is a hair more dynamic “down there”. This is noticeable on direct comparison, but is never an issue when listening to music long-term on the Cary monos. If we are talking about warmth and harmonic richness, the Carys are in a totally different league than the Musical Fidelity KW500 integrated which sounds very lean, bleached, and threadbare in comparison (or not, really). A fairer comparison is the fine harmonic resolution of the Quicksilver V4 tube amps, but the Carys offer the huge dynamic ability, tighter and more powerful bass, and more extended high frequencies that you would expect from a “big iron” transistor design.

The 500MB combines the resolution, harmonic completeness, and warmth of tubes with the bass control, dynamic power, and high frequency extension that have been province of solid-state. I will have more to add to this review in the very near future, but for now let me summarize with the following statement:

The Cary 500MB is the realization of the long-standing dream to combine the best of solid-state and tube sounds. These amplifiers should work spectacularly well in any high-quality sound system. They are my new reference. Thank you, Cary Audio!

There is only one reason that the positive traits of all of these components and cables could be heard: the Cary 500MB amplifiers have the ability to pass them along to the speakers. Further extensive listening to the Cary amplifiers has done nothing to diminish or make me want to qualify my earlier impressions. I doubt I will be auditioning power amplifiers for a long time. There is no need.

Link to manufacturer’s Web site: Cary Audio Design
Thanks to Kevin Deal at Upscale Audio for his kind assistance.