The Classe CT-M300 monoblock solid state power amplifier is a nicely made component. They arrive double boxed and the inner box opens like a flower to reveal the very well protected contents. Included with each amplifier is a rack mount kit. The faceplate needs to be attached to the amplifier with the included bolts before use, although on one of the faceplates the threads were not tapped deeply enough to allow the bolt to screw in fully. 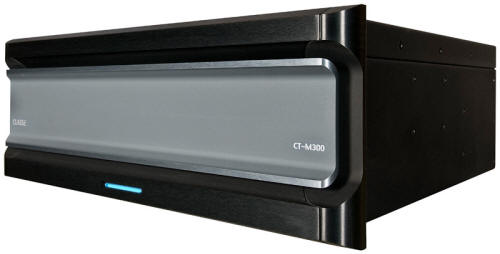 The amplifier is available in two different enclosure styles: the CA-M300 (below) is the more stylized with a rounded front panel, and the CT-M300 is more traditional and will be a better match with other manufacturers’ components. I was reminded of the TV show “Battlestar Galactica” and the appearance of the robotic Cylons due to the lights on the front of the CT version. The amplifiers are basically the same internally, so which is best is purely a matter of personal preference. The CA is $1,000 more per pair than the $10,000 per pair retail of the CT-M300 version. There were some internal differences in the amplifiers I received, serial numbers 2040126 and 2040150. It seemed appropriate not to review two amplifiers with different parts, but I was assured that the differences would not be audible. The audition continued.

There is a temperature-controlled rear-mounted fan in each amplifier that pulls air through a tunnel to keep the output transistors at the correct operating temperature. The fans were not audible when music was playing at anything above a quiet background level. The amplifiers current draw closely tracked volume level and rarely exceeded two Amperes per amplifier.

After sufficient break in, about 200 hours, the amplifiers were heard to be fairly neutral in octave-to-octave tonal balance, with a very dynamic and powerful presentation. There was some obvious forwardness in the upper midrange with just a slight lessening of harmonic depth in this range: a hint of dry, solid state-type of character. This gave the impression that previously unheard low-level detail was being newly uncovered. It often made female vocalists sound a bit sharp, such as – and this is exaggerated – making Linda Ronstadt sound a bit like Janis Joplin. This also shifts the center of attention upwards, from Middle C’s 262 Hz to around 600-800 Hz which can make acoustic (real) piano sound somewhat artificial. The upper midrange spectral anomaly gives the impression that there is a black hole around Middle C and vocals can often lack some foundation and seem weak in their fundamental sounds.

On “Chuck E’s in Love” and “Last Chance Texaco”, from Ricky Lee Jones, MFSL 1-089, her well-known smoky, semi-obscure vocals are wiped clean. With the M300s, Ms. Jones is as clear and understandable as Bonnie Raitt or Allison Krause.

The M300s have superb bass and offer a benchmark for the terms “deep” and “powerful”. This truly excellent ability and character carries through perfectly into the lower midrange, giving male singers especially, a rich resonant character that is very real sounding. However, those who prefer the sound of the 300B vacuum tube and its midrange magic will find the M300 to lack the tube’s rich harmonic tapestry. But then, 300B lovers will have a very hard time finding any solid state amplifier satisfactory.

The upper treble is well balanced with the rest of the treble range and is never grainy or coarse. Indeed, there is a complete lack of grain or other typical solid-state artifacts. There is remarkable low-level resolution in the upper frequencies. The sound of cymbals, however, allows one to hear some frequency-dependent character as their higher-frequency overtones seem to move towards the locations of the loudspeakers instead of remaining locked in position with the rest of the drum set. This is a strange effect to hear instruments with significant upper frequency content cluster at the speaker location while other instruments occupy their correct locations in the acceptably wide and very deep sound stage. Where the treble range is consistent unto itself, the overall amplifier character is of a sweet never-forward treble.

The correct loudness level for any music is always apparent. The 0.1dB volume adjustments of the Levinson 326S preamplifier were very welcome to set the volume “just so”. Just a few tenths of a dB louder and a desire to reduce the volume is noticed. After 2-3 LP sides at high volume levels, my ears felt tired and needed a rest. This never happened with the Manley Snapper, Levinson, or Modwright amplifiers.

The Snappers, which are 100 Watt EL34-based (I use 6CA7s) mono amps, have a different tonal balance, as does the Levinson 532H. With either model, the upper midrange forwardness of the Classe is not heard. Since the tube amps do not like running with the inputs and speakers disconnected, the Snappers were stone-cold as they were swapped in to the system. As they usually take 20-30 minutes to reach their harmonic best, even after just a few minutes they bested the Classes in harmonic depth, but just by a small margin. If the rest of the audio system is neutral, the Snappers will offer more of a “eye-closing” “sweep me away” experience, while the Classe amps can provide a more energized, toe-tapping and fun, partying show.

The Classe amplifiers have extremely low distortion while offering a focused, lively sound. This benefits complex music by keeping the presentation clear and accessible. This is also one of the few areas in which many Class D digital amplifiers excel. As noted above, the bass and upper bass of the M300 is truly special. It “nails” the power and resolution in this range and continues assertively up to around 200 Hz.

The Classe amplifiers have remarkable performance in several key areas and could be a perfect match with complimentary components and rooms. Like the house sound of some products from Audio Research Corporation, the Classe CT-M300s could be a welcome addition in many systems.

My thanks to Myron Hawthorne at C & M Home Theater. This review would not have been possible without Myron’s kind assistance.