The subject of this review, the Denon DL 103R is about as elusive as the rare spotted owl. No sooner do you discover one of these low output moving coil cartridges new or used on the Web than you find another site telling you they have been discontinued. But are the Denons, and the 103R in particular, the proverbial giant killers they are made out to be? Is it worth seeking out these mysterious phantoms to take you to that next level of audio bliss?

Before I get to how they sound, let me dispel the myth of the disappearing Denons. In spite of what you might read over the Internet, most of the company’s classic and newer models are generally available. Since they’re sourced from the Land of the Rising Sun, you may have a bit of a wait depending on which model you desire. I found three sites selling the DL 103R that had them in stock, though not too heavily discounted. But isn’t that part of the excitement–the wait–knowing that for a song compared to some of the stratospherically priced MCs out there, you can own an audio legend from the dawn of hifi? There is even an informative Web page dedicated to these black beauties: Denon on High-End Audio. 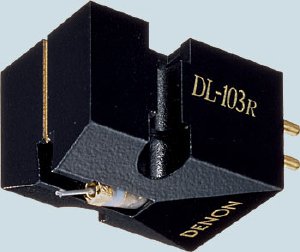 The DL 103R is an updated version of Denon’s venerable 103 model, the latter introduced for the Japanese broadcast market in the early 1960s. The original has been improved a number of times since then but the basic layout of 103 looks the same. Think big, black and bulky. This is functionality, not sex appeal. The -R version features much finer precision wound coils which are made from 6N pure copper wire. This accounts for the higher retail cost of nearly $400 US. The cartridge is fairly easy to align in my Nima tonearm thanks to the parallel surfaces of the cartridge body. But it is the usual pain in the arse to mount because this unit is not tapped, which means fiddling with some tiny nuts very close to the body. No puns please. The Denon 103R has a very low output of .25mV. This may require careful system matching with phono preamps and preamplifiers. I used the maximum gain setting of 53 db on my Monolithic Sound phono pre, and had all the juice I would want without excessive noise. Lower gain settings on other units might require a step-up device to be used with this cartridge.

All fine and dandy, but what happens when the needle caresses the groove? Welcome to my new sub-$1,000 reference. In my Roksan Radius V Nima tonearm, set to track at precisely 2.5 grams, I greatly enjoyed the Denon. Not love at first listen, because initially there is nothing startling or striking about the sound. Do not expect hifi pyrotechnics here. The first sign I was on to something sublime with this unassuming looking design was just how much unplayed vinyl I was pulling out of my collection. I had never thought that the midrange on my Grado Sonata was pronounced and somewhat grainy until I compared it directly with the Denon’s. Now I know the Sonata is lacking. The best word that captures the 103R’s sound is refined. Listening to the new Emmylou Harris-Mark Knopfler double-LP, All the Roadrunning, through the Denon is an enriching experience. The title track on side four in particular sounds so plaintive – so full of that sheer longing – that Emmylou marvelously, effortlessly, conjures up. Can an MC this inexpensive really have such refinement to its presentation?

Music simply sounds more right through this cartridge. I almost hate to dissect it, frog-like, into the usual audiophile categories. Yes, it has prodigious bass when called upon to display it on a thunder of a track like Prokofiev’s Russian Overture, from an unopened Living Stereo recording I found waiting for me one late winter day in a dusty old shop in the Hudson River Valley. This is definitely better bass than my reference. Not more in an absolute sense, just more richness. The Denon also has a nice way with brushes on snares – which I noted to fine effect, thanks to Philly Joe Jones on the great, late Bill Evans album Quintessence. But it was Harry Nilsson doing the old standard Lazy Moon from the beautifully recorded A Little Touch of Schmillson in the Night, that sealed the deal on the DL 103R. This low-cost moving coil easily wrung what seemed to be the last iota of emotion out of Harry Nilsson’s voice. “A kiss is still a kiss” when the Denon is given a chance to portray the essence of this sweet music. The fundamental things apply, here!

This Japanese instrument is a great tracker as well. Passages that tended to break up under the Grado were now presented with ease but without any hint of strain. The 103R is also quiet. All the usual potentially distracting pops and ticks that the Sonata seems to dredge up were pushed far further into the sonic background. Yes, they were there, but no longer as analog artifacts that you had to listen around. A very nice trick of the Denon.

This is music. It led me to some A-B comparisons between vinyl and CD, something I have not done in awhile. I have a very well remastered set of Chet Baker songs on a recent Sony CD collection that I could easily compare to my old LPs of same. I recall when I got this jazz disc how superior it sounded to earlier digital transfers. I used to think that with the Grado and my Benz Glider I preferred the CD on some cuts and the vinyl on others. Not with the Denon. It just wasn’t close in my opinion. The sheer continuousness and unforced detail of the 103R ran circles around the little silver discs. In its unassuming way this cartridge just makes beautiful music. Playing it, you keep turning your head from whatever else you’re doing at the time, and look up and smile. (This is the essence of the Zen Test. – Ed.) Here comes that word again: refinement. No grain; no peakiness; just golden music.

Downsides? Everything seemed to sound so good on vinyl with the 103R that I thought the cartridge might be homogenizing the music, prettifying it somewhat. So off went the Denon, back in went the reference. Numerous times. (Jerry, next trip to the Rockies you owe me a cold one.) Much experimentation later, case closed. The Grado (and the Benz) just sound less like music and more like a collection of sound being thrust from the speakers. I like my Grado very much, but I am now more aware of its limitations. Very good notes come through the Sonata, but just not as much musical excellence as with the Denon. Even if there is a slight mellowing of the tone with the -R, I’ll take it!

Enough words. I have some new, old albums to rediscover on this wonderful cartridge. With the caveat that your mileage may vary, and that I have not heard many of the megabucks MC’s out there, I brand the Denon the best under $1,000 cartridge I have yet heard. And what a bargain to boot. I’m happy to give it my first 10 Audio 10 LPs award!

Editor’s note: The high rating of this budget cartridge has generated many inquiries, all asking the same basic question, “If this product got a “10 LP” rating, where does that put other cartridges such as the Zyx UNIverse or Shelter 90x?” Paul found it to qualify for the rating he assigned. In my system, another sample of the DL-103R earned an 8.5 LP rating. The cartridge is very good for the money, but certainly there are better cartridges available, and again certainly, they cost more.