WARNING AND DISCLAIMER: Working with high voltages can cause serious injury or death. You may read the following project description for entertainment only, which is the intended purpose. 10 Audio makes no warranty express or implied for any result and assumes no liability for any damage to person or property that may result from anyone using any information included in the following project.
IF IN DOUBT, DON’T!
———————————-

The Shunyata Hydra series of power conditioners is generally regarded as some of the better products for cleaning up the AC voltage supplied by local utility companies. Many users and reviewers report positive results including a reduction in noise, increased dynamics, and greater silence between musical notes. I have found that power conditioners have these effects to varying degrees depending upon not only which product is used (see my PS Audio Ultimate Outlet vs. Shunyata Hydra 2 review), but also upon the time of day. My experience in my suburban location is that power conditioning is a necessity during the day and early evening hours, with much less of a benefit late at night when the power is less contaminated by large user loads.

The Hydra 4 was chosen for this project over the Hydra 2 for one main reason: The Hydra 2 is a sealed unit, but I could remove the cover of the Hydra 4 and see what is inside! I also wanted my result to have 4 to 6 outlets to accommodate my ever-changing audio system. First, let’s take a close look at the Hydra 4. Here is an excerpt from the manufacturer’s description on their Web site:

“Shunyata Research adds yet another custom element to the Hydra Model-4 in the form of its silver/rhodium plated CDA 101 copper buss bars. This one-of-a-kind buss system elegantly replaces all point-to-point wiring, improving current linearity and performance. Shunyata Research’s Trident-Defense System makes its first appearance outside of the Hydra Model-8 with Shunyata’s own 7-element Venom filter.

“This uniquely passive approach isolates each of the Model-4’s outlets from one another as well as eliminating system and line-borne noise.” 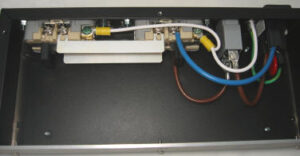 Here are three images of the inside of the Hydra 4. I was unable to confirm that the silver buss-bars “replaces all point-to-point wiring” because in my units (I had two different Hydra 4s), some type of insulated wire connected the input receptacle, circuit breaker, and the first AC outlet (components on the right in the image), and then the buss-bars connected the first AC outlet to the second AC outlet. I was also unable to discern in what manner the solid links between the two outlets on each of the AC receptacles and the buss-bars connecting the two AC receptacles “isolates each of the Model-4’s outlets from one another”. 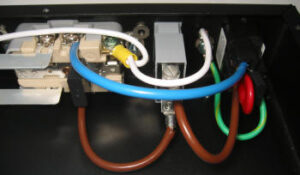 I will allow the possibility that I may have misread or misinterpreted the Shunyata marketing language for this product. However, using my own two eyes (with vision corrected to 20/20) and comparing their claims to the actual models in front of me, I have to share my reaction to the above: this is just plain BS. 10 Audio is not nor is it intended to be a sensationalistic e-rag, purposely looking for dirt or inventing controversy. However, in my opinion, this is a pure and clear example of marketing hype that does not relate to the actual product. If you see something different, please let me know. Thank you for letting me get that off of my chest. Moving on now…

In summary, the “7-element Venom filter” was a varistor and three (or two) noise suppression capacitors. If we include the AC outlets and circuit breaker, we arrive at a parts count of 7.

I used an available power strip as a base for this project. In stock form, it included “cryo treated hospital grade Hubbell AC outlets”, a 15 amp IEC receptacle, and a resettable circuit breaker. It sells for approximately $200. The maker of this strip will remain anonymous because my sample, which I purchased from the maker at an AudiogoN auction, had the incorrect wiring installed; 16 and 14 gauge wires instead of the advertised 10 gauge. The manufacturer related that only three or four below-spec units were made, and that future production units were correct and will meet the advertised specs. Due to the sealed design, which required me to break off the end cap to gain access, it would be difficult for buyers to confirm that their units meet spec. As received, it sounded very similar to a $20 metal power strip from Home Depot, and I regretted paying over $127, plus shipping, for this little power house (wink) of a power strip.

For internal wiring of the “DIY Hydra” project, I used 12 gauge cryo treated wire from VH Audio. I purchased the Vishay noise suppression capacitors ($2.31 each) and Littlefuse varistors ($1.13 each) from Mouser Electronics. Let the games begin!

I first installed the Vishay noise suppression capacitors across the AC outlets, one capacitor per outlet as seen in the Shunyata units. (The Vishay units are grey in color where the Okaya part is black.) This required drilling small holes in the rear plastic of the outlet to allow the wires to fit easily and neatly. The wiring was replaced next. It was soldered in place on the IEC receptacle and I used the screws on the AC receptacles. I made the decision to not wire the circuit breaker as it certainly could not improve the sound of the unit. I then secured the capacitors to the outlets with RTV 66B clear silicon adhesive. Although RTV 66B has a rather unpleasant odor when first applied, after it dries to a rubbery consistency it is completely odorless. RTV is useful for many different applications: even though I buy it at an auto parts store, I doubt I have ever used it for any car repairs. I left intact the stock green/yellow ground/earth wiring.

After completing the modifications, I experimented with the sound of the unit with and without the Littlefuse varistor (the red disk in the image to the right), and found that it added a very slight grain to the sound of the lower treble when present. In final form, the varistor was eliminated with no loss of peace of mind. I also experimented with installing one Vishay noise-suppression capacitor across the AC receptacle. Since this part could not be reliably identified in the one Hydra 4 that included it, and also since it made no detectible difference to the sound of the “DIY Hydra”, I did not include it in the final configuration that was compared to the Shunyata units. To equalize the results, I used two Shunyata Python Alpha power cords: one with a 20a IEC connector for the Hydra 4, and another with a 15a IEC for the DIY version. These cords list for $1050 each.

I have noted in other writings here on 10 Audio that the effectiveness and effect of power products is very dependent on the quality of the power already pouring out of your walls and also on the audio components in the system at the time. The sound of many components can be changed dramatically with different wires and power treatments, and other components are almost completely immune from the effects of aftermarket power products. The take-away is that your results may be very different from my results.

And the results? After using the two power conditioners with different components – both tube and solid state – and at different times of day and night, I reached the conclusion that the “DIY Hydra” was a sonic twin to the production Shunyata Hydra 4, taking into account the additional purity provided by eliminating the varistor in my “DIY Hydra”. I found that similar performance to a $700 manufactured product could be obtained for an expense of roughly $100 and some time and effort. The downside is that the “DIY Hydra” has a resale value of effectively zero. The well-reviewed – and deservedly so – Shunyata Hydra 4 will retain its value far better.

For a very inexpensive, “bargain basement” power strip with significant noise reduction, I simply added one Vishay noise suppression capacitor across each AC outlet in a Home Depot-sourced 6-outlet metal enclosure power strip with excellent results. Although this basic strip does not have any cryo or hospital grade audiophile-approved parts inside, it comes quite close to the performance of the “DIY Hydra”.

Please note: For liability reasons, I am unable to offer any assistance to those of you who may have questions about building your own DIY power conditioner. Sorry.