Let’s start with the unique battery-powered feature. The preamp has two banks with two batteries for each bank. The “power cord” is simply a connection to the external AC battery charger. There is no IEC power cord and no expensive power cord can be connected nor is one required. (Use the $200 or $500 or more that you just saved on a tweak power cord to buy music. You’re welcome, courtesy of Dodd Audio.) The audio circuitry of the preamplifier is powered from the internal batteries when making music.

There is a switch on the front panel to choose Battery 1 or Battery 2. The instructions suggest using both sets regularly to extend battery life. I simply chose the battery that matched the number of the day: on odd numbered days, such as the 5th of the month, I used Battery 1 and on even numbered days I used Battery 2. The battery charge would last for about 13 hours before the preamp beeped to let me know to switch to the other bank. The recharging is continuous for the unused battery or for both batteries when the unit is off. So you can listen to music 24/7, with just a pause every 13 hours or so to switch to the other battery since there is always battery power available. The batteries should work properly for several years, after which a complete replacement set costs less than $80. This system is remarkably efficient and easy to use. 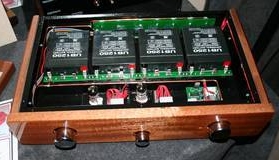 The internal construction of the preamplifier is modern and clean. There are a minimal number of PC boards connected with either ribbon cable for control functions or high quality wire for the audio signal. All input switching is accomplished on the rear board next to the connections. There are two tubes of the 6922 variety. I used the stock tubes, and only the stock tubes, for this review. All parts are high quality, and include SoniCap Teflon® capacitors. The batteries fit snugly inside the enclosure and give the entire unit a reassuring, non-resonant mass.

There is another feature that I am excited to tell you about. It deserves a separate paragraph to let you know that any tube you install in this preamp will – guaranteed – last twice as long before it needs to be replaced. In a very clever implementation of the 6922-family dual-triode, the Dodd preamp uses only one-half of each tube. And where the left channel uses “triode 1”, the right channel uses “triode 2”. I hope you are following me and see what this means. It means that if you swap the tubes, left for right, you use the sections of the tubes that were not used by the other channel! New tubes! This is such a cool feature that not only effectively doubles the life of your tubes, but offers a level of economy for potentially expensive tubes that no other preamplifier in existence can claim. Again, you’re welcome, courtesy of Dodd Audio. Thanks to Walter Liederman at Underwood Hi-Fi, whose kind assistance made this review possible. 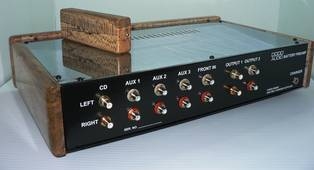 The Dodd preamplifier is absolutely gorgeous. The front and side panels are thick, polished wood – rosewood in this case – with laser etched dark lettering on the front that was thankfully hard to see unless I was close enough to need to. Curly maple is also available, and you will see the laser etching more due to the contrast with the lighter colored wood. Against this rich, dark background are three chrome knobs: input selector (including a pass through for home theater), the battery/mute selector mentioned above, and volume. Volume is adjustable from the hefty remote control, which is made from the same wood as the preamplifier’s front and side panels. The top is lustrous chrome and quite heavy, and the screws which secure the top have nylon washers to protect the finish. The preamplifier is so good looking that I wore cotton gloves when moving it or installing the tubes. The packing is form-fitting cut foam (no peanuts or bubble wrap, thank you very much) and very well done. In whole or in part, the presentation is first-class. If the sound keeps up with the visuals, we “have a ballgame”, as the saying goes.

It does. The absence of noise is startling. In my system, the volume control is usually around 9 o’clock, and in the worst case never exceeded the 12 o’clock position. Putting my ear directly in front of the speaker offered no more noise than when the preamp was muted. It wasn’t until the volume control was above 3 o’clock that a very small trace of tube hiss was heard. This was very close to the Placette Active preamplifier, which is easily one of the quietest active preamps to ever pass through my listening room, and not far behind their Passive Line Stage. The Passive, as you might surmise, has no noise. The Dodd is the second best active pre in this important regard, but at any volume control setting I ever used, it was effectively dead, black hole, anechoic chamber, totally and completely silent.

Why is this important? For the simple reason that music seems more real and involving than from any other active preamplifier I can recall. Musical detail, the nuance that tells us that we are listening to a good recording versus a poor one, CD versus vinyl, or even clean power versus noisy hash, is often in the very low level information. This includes harmonic content, room ambience, and subtle cues to the quality of a performance. Noisy components (the Atmasphere MP-3 preamp comes immediately to mind) mask this important musical content. The Dodd Battery-powered Preamp passes low level information as well as plain wire! This was verified using the Benchmark DAC-1, which has its own volume control, and also with the Placette Passive, which once again is shown to be audibly invisible.

The Dodd has a character, one which will contribute to your immersion in the music. There is a slight softening of the initial transient edge of most upper frequency sounds. No content is actually missing, however, just pushed a bit down in the mix. (Following the initial posting of this review, a Dodd owner reported that this is related to the choice of tubes. His favorite: 1965 USA Amperex 7308 tubes, which he says would eliminate this slight “softening” that I hear.) This is actually a benefit for some acoustic music, and for most electronic music as it lessens the sense of glare. The sound of every horn in the orchestra has a body and richness that I enjoyed immensely. It was easy to hear a horn’s metal signature as a clear and distinct entity that was not overwhelmed by the sound it produced. The body of stringed instruments, violin and cello especially, were wonderfully apparent in addition to the sounds of the individual strings. This highly detailed sound fully communicates the richness and body of any well recorded instrument. The sound of a mallet striking a tympani or bass drum is remarkably clear and distinct, as is the initial vibration of the drum head. That is low level detail!

Voices are magnificent. All vocals, from bass to soprano, have a deeply resonant and captivating quality that raises the interest for singing. I listened to The Nylons a cappella recordings many times during this review. The separation and clarity of the individual voices was totally mesmerizing. I have never heard these recordings sound so real, the voices so tactile and human. Even though the Placette Passive gave me what I know to be more accurate sound, I found I enjoyed vocals more with the Dodd preamp. 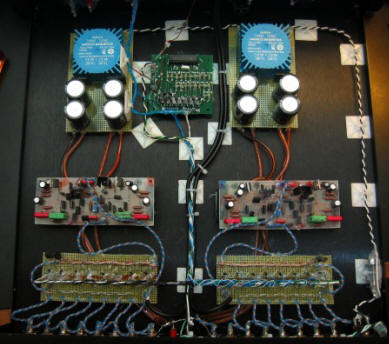 Let’s take a moment here for a mini-review of the Placette Active LineStage. Take a look at the image of the interior of this $4995 preamplifier. It should be clear that no machine could possibly build this component. The wiring is complex in design and meticulous in execution. The preamplifier uses the same Vishay S102 non-inductive resistors as does the Passive, and adds an active stage. The active stage provides the input and output impedances that most sources and amplifiers are designed for. This takes some strain off the source – CD player/DAC, or phono preamplifier – and makes it possible to use lower input impedance (below about 20k Ohms) amplifiers than is recommended with the Passive. These standard impedances make attaining system synergy more certain.

The bass is very powerful and controlled. It goes deep and has excellent detail and resolution. I found the entire bass region to be very close to perfect. From the upper bass through the treble regions, high resolution continues. The preamplifier is said to be able to pass a 100kHz square wave (a very difficult feat), and the excellent treble clarity would tend to verify this spec. In the upper midrange there is a noticeable trace of solid-state coolness. This is not a lack of resolution, per se, but it seems as if this area is pushed forward a bit. The otherwise excellent Placette interconnects did not help to tame this character which is sometimes referred to as “transparency”. To paraphrase the 3rd century BC Greek saying, “Audio beauty is in the ear of the beholder”. (The Phrase Finder)

Lateral sound staging is precise, but the normal image I hear on one cut extending to the left of the left speaker position was difficult to perceive. The sense of depth was very good. It this seems to be a harsh evaluation of the Active, it is simply that no solid-state preamplifier I have heard offers the kind of deep tonal palette that even average tube preamps seem to deliver so easily. From the best of Rowland, Ayre and others, my stopovers with sand preamps have been short-lived. That said, the Placette Active LineStage Preamplifier is one of the best of the breed. Placette Active Line Stage rating: 8 LPs. This concludes our mini-review for today.

The conclusion is that the Dodd was the most musically involving preamp of the three overall, and easily the best looking. There was less bass detail and punch “down there” than either Placette, but this is simply the preamp’s character relative to two other preamplifiers and not an issue of quality. The Dodd preamp is as good as they come for overall musical involvement, which is what 10 Audio is all about. Where most good preamplifiers open the door for the listener to enter the music, the wonderful Dodd actively draws you into the performance which often results in intense musical experiences. The Dodd Battery-Powered Preamplifier is an extremely fine music making instrument that could easily grace any audio system.