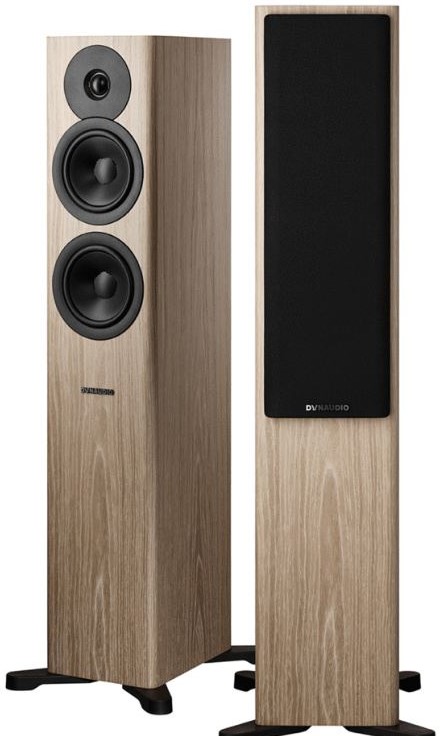 “Born in Jupiter”. This is the headline on the Dynaudio Web site product page. I had no idea what that means. Further digging on the site revealed that “Jupiter” is the name of Dynaudio’s test and development center, a very large room reportedly measuring 13 meters (42.6 feet) in every dimension. 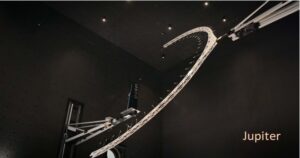 In Jupiter, “(a) speaker can be measured individually or, given the room’s size, engineers can install several speakers at once to simulate the typical home audio setup (not many high-end hi-fi owners have just one speaker). Then, the robot arm – with its 31 microphones – takes a 360° measurement. So we end up knowing how a speaker sounds not only in the sweet-spot, but from everywhere else too.”

Dynaudio is a well-known name among audiophiles. In the 1980s and 1990s, Dynaudio drivers were used in some of the best high-end loudspeakers. The highly regarded Merlin VSM speakers, among others, featured the Dynaudio Esotar tweeter. The Esotar tweeter, once considered as the best tweeter in the world, has been refined and upgraded over the years. One of the latest versions, called Cerotar, is in the new Evoke series speakers. This version has an exclusive feature named Hexis: a “resonance-defeating inner tweeter dome”. “This ingenious little dimpled device sits right behind the soft tweeter diaphragm and reduces unwanted resonances while smoothing out the overall frequency response.”

The woofers appear similar to previous Dynaudio drivers which use their proprietary MSP (Magnesium Silicate Polymer) material, which has been a staple of Dynaudio cone drivers since 1977. These drivers do not sound “plastic”. The midrange/woofers are also the result of years of refinement. Dynaudio engineers routinely focus their vast knowledge about driver design with excellent results.

The Evoke 30 is an ideal home theater speaker: very nicely finished to be welcome in a living room or dedicated theater, minimal footprint, and high performance. At only 34 pounds, they are easy to move around, but stable with the supplied footer system. The cabinets are well braced. There is certainly more cabinet vibration than was felt on the aluminum body 120 pounds Magico speakers, but this vibration is acceptably muted. Color options include black and white gloss, dark walnut, and blond wood. The black grilles attach with magnets, so there are no unsightly fittings showing if the grilles are not used. Other grille colors might be welcome.

After just a few hours of break in, the upgrade of the Evoke speakers over and above the Focal Chorus speakers was apparent. The aluminum dome tweeter of the Focals can sound a bit crisp and edgy at times, giving voices a hard, brittle character. This is heard with the IcePower-based Rotel amplifier, and these modules tend to be forgiving of sins in the treble. The new Dynaudio tweeter never exhibits this trait, being supremely smooth and easy on the ears. Confirming the old adage that “there’s no free lunch”, the cost of this relaxed smoothness is a small lack of upper treble resolution and a lessened feeling of air and space. This character could perfectly offset some streamed audio tracks. For example, I dig the concerts on AXS TV, but the sound quality on some of these shows can be rather underwhelming. Change the channel and the singing performances on “The Voice”, on NBC TV, can be thrilling when heard with the Evoke 30 in play.

The specs note a -3 dB at 40 Hz response in the bass. I don’t have a Jupiter tucked away in the corner of my listening room to confirm this spec, but let me suggest that a subwoofer will be required for low bass. The Evoke 30 sounds excellent from the mid-bass and up into the midrange, but the lower bass is largely MIA. Used with the supplied foam port plugs, there is a minor loss of bass extension, but the upper bass and lower midrange becomes noticeably more focused and clearer; a good trade-off. And with a subwoofer or two, this is a perfect marriage.

A fun song to demonstrate the speed and agility of the Evoke 30 is “Two Feet of Topsoil” by Brad Paisley, on his 2001 album Part II. The two 14cm midrange and bass drivers are obviously very high performance to be able to deliver this level of speed, clarity, and dynamic impact even at high power levels. Notes happen and then are gone, while sounds with long-decaying harmonics are well served. The midrange is very linear with no highlighting, a requirement for voices to have any chance of sounding real.

The Evoke 30 presents a very large sound stage, and work extremely well in the home theater, multi-channel environment. The 25C center channel perfectly blends in to present high quality, intelligible voices and center channel sound. There is a solid feeling of the size of the recording venue, with noticeable differences between studio and concert hall recordings. The speakers have excellent dispersion, with very little need to sit in the “sweet spot” to get a good sonic image. The sound stage fills the room. 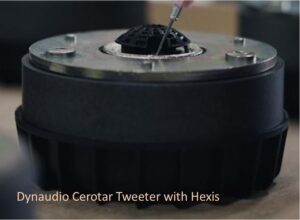 The best part of an audition – if it happens at all – is the moment you find that you are enjoying the sound and not actively comparing and judging what you are hearing against the reference component. An even better moment is when you forget all about being analytical and are simply enjoying the performance. The Dynaudio Evoke 30s are real music makers, with a very neutral and linear sound quality from the mid bass, up through the midrange, and far into the treble range.

The more I listened intently to these speakers in the main system above, the more I appreciated the transparency, especially throughout the midrange. Voices are special, delivering a large dose of you-are-there texture and presence. Violins and other stringed instruments have wonderful resonance and truth. The Evoke speakers often present a well-recorded singer right in my living room, something that the Focal Chorus speakers only occasionally achieved. 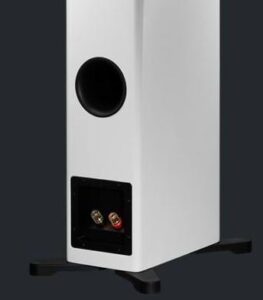 A side-by-side comparison with the $16,500 Magico speakers is not as dire as it might seem. The Dynaudio speakers handle this battle with grace and complete composure. Of course, the Magicos, with their diamond-coated beryllium tweeters and other super-premium parts, are higher resolution transducers. Even so, after a few minutes of listening to the 4.7 times less expensive Evoke 30s, music is involving and enjoyable and there was no hurry to disconnect the Dynaudio speakers and return to listening to the Magicos. The tonal balance, across the octaves, of the Magicos connected to the relatively softer sounding Valvet power amplifier is similar to the combination of the Dynaudio speakers wired to the relatively more forward sounding Benchmark AHB2 amplifier. Both amplifiers sound outstanding with the Evoke 30s.

The Dynaudio Evoke 30 speakers, and 25C center channel speaker, are excellent music and home theater speakers. They can play loudly when required, and deliver their core frequency range with truthfulness and clarity. As we have come to expect from Dynaudio over several decades, their speakers are high performance, showcasing new technologies that are grounded in good engineering and design. The Evoke 30 loudspeakers from Dynaudio are recommended for your consideration.

This review would not have been possible without the kind support of Matt Alterman of Crescendo Fine Audio in Wheat Ridge, Colorado. It was a pleasure working with Matt and his crew on this review. Thank you, Matt!