This review of Element Signature Apollo speaker cables presented some unusual challenges. What is the inherent sound of this component? Are there any particular characteristics which affect the sound in a positive or a negative way? What is the magnitude of the difference? Every review presents the same challenges, but these questions are usually resolved in fairly short order. As the audition progressed and days turned into weeks turned into months, it was clear that there would be no easy and reliable answers to these questions without extended and extensive auditioning. With this review, I hope to save you that effort.

The Apollo speaker cables are at the top of Element Cable’s Signature product line and sell for $995 for a 4 foot single-wire pair, factory direct. From the Web site:

“Apollo uses 16 individual strands of (99.99+% pure) solid core silver conductors for each cable. The strands are woven in a dual octennial braid and tightly wrapped with FEP Teflon dielectric. When complete, these cables account for over 300 feet of silver wire for an 8 foot pair.

“A large air core runs through the center, used to space out the conductors for minimal interaction; the result is a silent background that highlights Apollo’s extraordinary inner detail retrieval. Presentation is crystal clear, with pin-point imaging and a soundstage that is wide, tall, and deep. Most surprising is how smooth and neutral Apollo is for a pure silver cable, it doesn’t suffer from edginess and glare that plague other silver designs.

“…we’ll just stop here and ask you to audition a pair for yourself.”

Which is exactly what I did, after finding great success with Element’s Stealth “es” power cord. Unlike power cords, speaker cables tend to be less particular about which components offer a synergistic match. A good speaker cable will show its superiority with a wide range of components. For this audition, I used Marantz MA-9S2 Reference Series, Spread Spectrum Ampzilla 2000 and NuForce Reference 9 v2 mono amplifiers, and Marantz SM-11S1 and Wyred4Sound ST-1000 stereo amplifiers. Speakers included Dali Euphonia RS3, Dali Mentor 5, and Merlin TSM-MMe. Due to the length of the audition period there was a wide assortment of preamplifiers and source components including Sonic Frontiers Line 2SE+ and Audio Research LS26 preamplifiers, Manley Steelhead and AQVOX Phono 2Ci phono preamplifiers, SOTA Cosmos IV turntable with TriPlanar VII u2 tonearm, and Apogee Rosetta 200 and Prism Orpheus AD/DA converters. The Prism has the capability to bypass an external preamplifier and drive a power amplifier directly. The comparison speaker cables included the excellent Audience Au24 e, with a couple of others briefly joining the party. 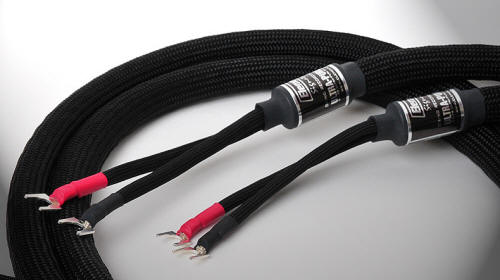 After about 200 hours break-in, the Element Apollo cables presented an immediately addictive sound that was unfettered. This sense of release from the physical constraints of technology and equipment is pervasive. The feeling that all upper frequencies gained a level of natural clarity and resolution was both very welcome and raised a concern that demanded further investigation. I am sure we have all heard a component that, immediately after installation, displays some particular characteristic that is judged to be an improvement over the previous reference. In my experience, a quick “that sounds good” is a danger signal that usually indicates an aberration which is not conducive to long term listening enjoyment. Occasionally, we install a component, and I am including cables into that category because of the large impact they have on the sound we hear, which offers a real overall improvement. This component then becomes a permanent resident in the system. However, cutting edge should not mean bleeding edge.

A similar sense of clarity and transparency is occasionally recognized to be a frequency-related anomaly resulting in a bright, forward, or accentuated upper midrange or treble. (The alternate, although less likely, possibility of a recessed midrange is implied.) It was the threat of this too-common trait that caused my initial concern about the sound of the Apollo cables, and I continued to listen very intently for much longer than usual with a wide range of associated components to see if this was just a trick or, on the rare but very welcome chance, a genuine advancement.

A common cause of an initial sense of clarity in a newly installed (but properly broken in) component is a frequency imbalance which favors the upper frequencies. I listened for this, for any sense of this, for any hint of this, for any whisper of this, for a long time with a wide range of music. I concentrated on the relationships between the sound of the fundamental note in the midrange and its harmonics in the upper frequencies. I listened to female vocalists whose range spans the midrange and soprano frequencies. I listened to the sound of cymbals, a standard reference here on 10 Audio, to hear if the initial sound of ringing metal matched the resolution and tone in the higher frequencies. I listened to recorded piano so see if the quality of sound from the left hand was similar to that from the right hand. I listened extensively, often with intense concentration and frequent changes in amplifiers or speakers, to be certain that the Apollo cables are a product capable of providing long-term listening enjoyment. To be confident that these observations would be relevant and useful and true, it turned out to be work. (They don’t pay me enough for this level of effort. Hold on, they don’t pay me anything. Oh s#*t:  I’m “they”! – Ed.)

The Apollo cables are not bright nor forward, but neither are they very forgiving of poor quality recordings. This is actually a good thing because if a lousy recording sounded good, then your excellent recordings will never sound up to their potential. The ability to accurately tell us the quality of a recording is required of any good audio system and not something which only critics need to use as an auditory microscope to facilitate a review.

The Apollo cables were only a temporary guest until I was confident that the large, immediately noticeable increase in clarity was not confined to the upper frequencies, which now displayed a very natural openness, depth, and accessibility. My initial caution very slowly gave way to appreciation for the equally fine resolution in the lower frequencies. This is not to say that the Apollo cables have a great treble but only good midrange. No, no, no. It simply speaks to the excellent performance of the comparison cables in the midrange, and to their relative shortcomings in the upper frequencies. My initial skepticism slowly became appreciation for the extraordinary overall performance of the Element Signature Apollo speaker cables.

The sound was not bright, or edgy, or up front, or unnaturally hyper-detailed. On the contrary. The Apollo cables always sounded smooth, relaxed, and unforced, while providing the most direct connection to the music that this listener has ever attained. I enjoyed an opportunity to hear some multi-thousand dollar speaker cables a few years ago, the ones that are as thick as your wrist and cost more than a new Corvette did in the days of Herman’s Hermits and Jimi Hendrix. The Element Apollo cables remind me of that experience.

I often applaud the Dali Euphonia RS3 speaker’s exceptional ability to create a large apparent performance space and virtual sound stage. They are “Holodeck Emitters”, getting out of the way and leaving a sense of the performers in my room that is rarely short of virtual reality. Installing the Apollo speaker cables instantly increased the volume and quality of the recording space. Individual musicians were presented as more realistically sized. They had better focus with excellent delineation between adjacent musicians. Each musician or singer appeared in greater relief from those nearby. This was especially welcome in helping to pick up the sound of a single trombone, for example, or an individual singer in a chorus, or focus on a bass line dancing in the background.

The lower bass performance is very close to the Audience cables, which are excellent when taken on their own. As I usually use a pair of subwoofers, currently Velodyne Optimum 12, the low bass presentation of speaker cables is a minor consideration in my system. But the upper bass is very important, and here the Apollos exhibit slightly better resolution than the Au24 e cables. This difference is not large enough to warrant a preference for one cable over the other. The Apollo cables have a special synergy with the Merlin TSM-MMe speakers. The midrange performance has a very present, tactile quality that made all vocals completely convincing. The speakers disappeared. That quality of natural openness in the upper frequencies worked very well with the Merlins, moving the quality of the entire loudspeaker up to a higher standard.

At about this time, I was finalizing a procedure for copying some of my analog LP collection into a computer-based digital format, and the Apollo cables’ very high resolution were a great help in this process. I would not say that my conversion process could not have been fine-tuned without using the Apollo cables, but it would have taken longer to make decisions based upon very small differences in the recording and playback process. For example, I was testing the audibility of various sample rates on recordings using the Prism digital converters. Abbey Road Studios also used Prism converters for the recent remastering of the Beatles collection. Since higher sample rates produce larger computer files, I was attempting to determine the lowest sample rate that would not compromise sound quality. With the Apollo cables, it was easier to hear the sonic differences between the different sample rates. Even the differences between 176.4kHz and 192kHz were easily heard.

As I understood the true character of the Element cables, I came to the conclusion that these speaker cables perform on a higher level. There was a strong desire to leave the Apollo speaker cables installed, end the cable comparisons, disable reviewer mode, and listen to music. Their ability to let one hear deeply into each note on a huge and richly detailed sound stage has increased my enjoyment of listening to music. You may have thought at one time or another that your system was sounding especially good on a particular evening. Since installing the Element Apollos, I have that same thought every evening. Removing them from my system was not an option and I bought them.

The Element Signature Apollo speaker cable is a true high performance reference component that excels in every sonic characteristic. They should, objectively, raise the quality of the sound of your music system while, subjectively, increase your enjoyment of your music. As they say, “we’ll just stop here and ask you to audition a pair for yourself”.