The Emerald Physics EP100.2SE digital stereo power amplifier, in its latest silver enclosure is a beautiful looking and powerful component. It weighs 16.5 pounds with its large toroidal power transformer and has a rated power output of 100 Watts per channel stereo and 270 Watts mono. It has a retail price of $2,200 and is regularly discounted to around $1,500. The unit under review was purchased along with the factory recommended and sonically worthwhile Audio Magic Beeswax fuse option. 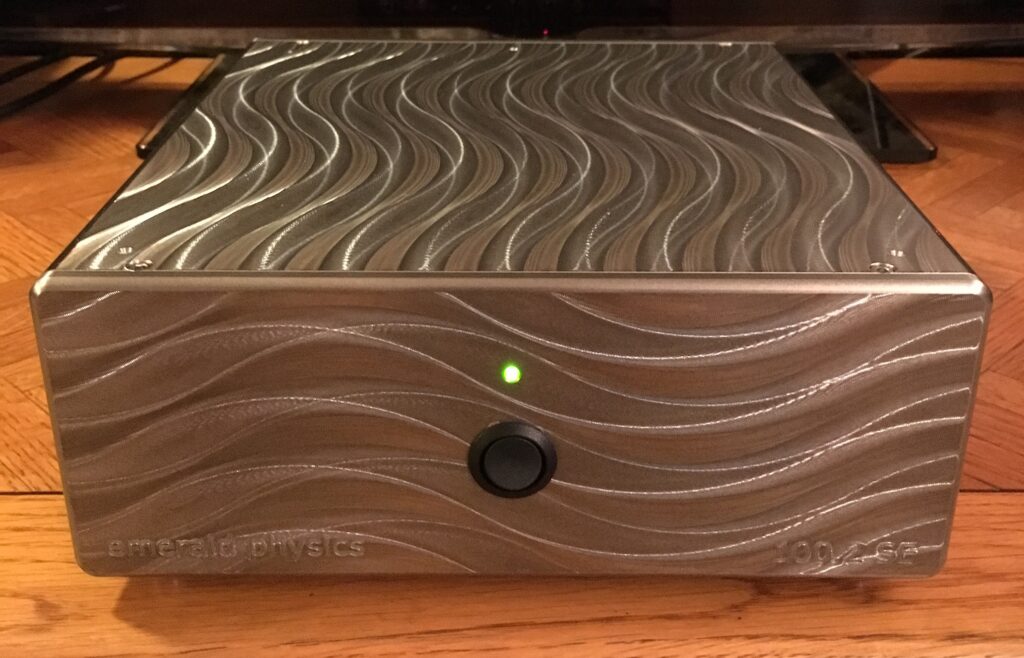 Under the microscope of the excellent beryllium dome tweeter of the Fritzspeakers Carrera BE speakers, the upper frequency range is well served by the EP100.2SE. Many digital amps seem to offer a smoothness and freedom from artifacts that is similar to the pure clarity that we enjoy from single-ended amplification. The absolute resolution in the upper frequencies, the ability to deliver the finest detail, is somewhat less than the PS Audio Stellar S300 amplifier which is based on the latest ICE Power amplifier modules. I was not able to determine the source of the digital amplifier board or chip amp in the EP100.2SE.

In the midrange, the Pass XA30.8 and Rogue Audio ST-100 amplifiers are more accomplished at delivering the “meat” and substance of every sound. And the PS Audio amp lets singers sound more human and less recorded with greater midrange warmth and presence. The Cary amp, at almost $13,000, really provides more believable and tactile singers in a larger, more image-specific recording space. If there is still anyone on this planet who thinks that all amplifiers sound the same, well, just NO! 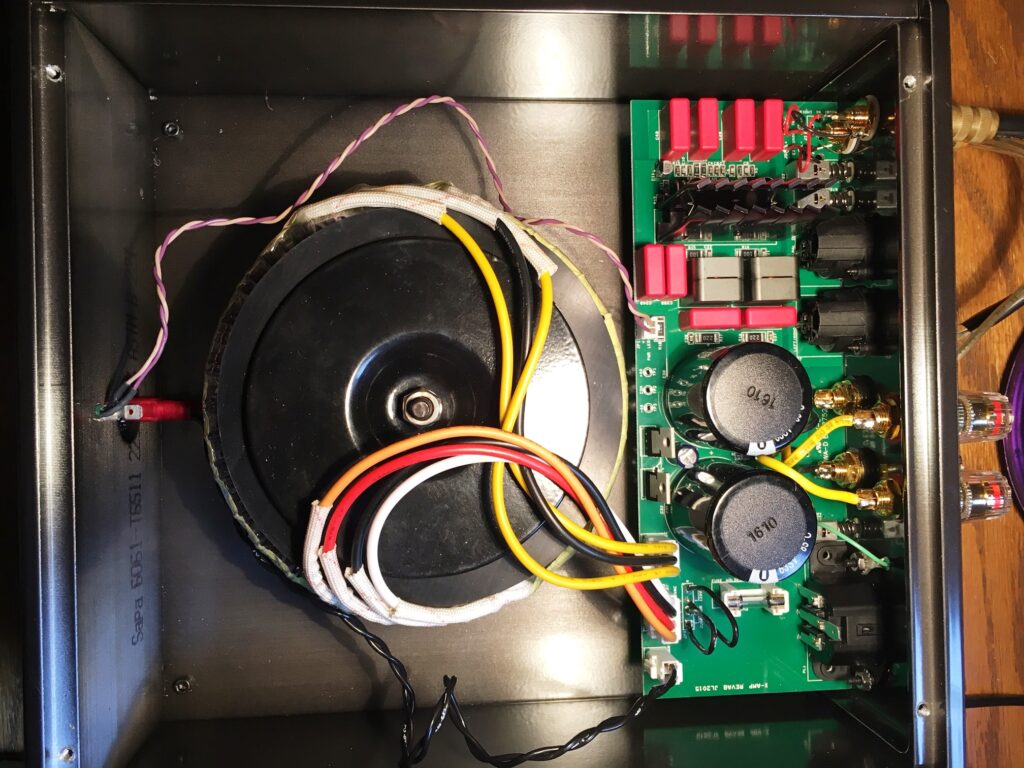 In the bass, the Emerald Physics amplifier has noticeably less power and resolution than any of the other amplifiers on hand, except the 10 Watt Inspire wth 6V6 output tubes. This deficit was partially addressed by adjusting the JL Audio subwoofers to compensate. I use the high (speaker) level inputs on the subwoofers which keeps the relationships between the main speakers and subs constant regardless of amplifier, so having powered subwoofers in the review system can contribute to forming valid conclusions about amplifiers, just as when using traditional full range speakers which also have significant, and sometime unpredictable, amplifer and listening room interactions.

A small deficit or lack in any sonic area is greatly preferred over the faults of many Class A or AB amplifiers which add distortion and chop up the sound with their push-pull designs which almost invariably add a coarseness and artificiality to the sound. With today’s high performance tweeters, this is audible. In this reviewer’s mind, the class of amplifier operation is less important than whether the amplifier is push-pull or single ended. Class A biasing is usually better sounding than Class AB, but single ended leaves them both in the dust.

Please note that this review compares the performance of this amplifier to other amplifiers, and not directly to live music. A comparision to live music is a nice ideal, but due to the huge variability in concert halls, orchestras, conductors, and the entire recording chain, it is little more than a concept for the purposes of an informative review, one that has small value in potentially influencing your buying decision. Of course, if you have the same recording, played back on an identical system in a very similar room, the only variable being the component in question, then live music comparisons are certainly the best. Regardless of this ongoing live vs. recorded debate, you will know if you like this amplifier in short order.

The EP100.2SE amplifier is very dynamic and never ran out of clean power in my medium sized room. The amplifier is easily able to track large, instantaneous changes in power. Importantly, it also changes loudness without changing the tonal balance and straining to do its job. This dynamic, “fast” character greatly benefits complex music. As another seemingly common trait of digital amplifiers, the EP100.2SE has excellent clarity and composure when presenting complex music from studio recordings or orchestras of any size.

For an example of composure under high demand, listen to “Mr. Policeman” from Brad Paisley’s 5th Gear CD. Paisley is certainly a master guitarist, playing not just the notes – at Warp speed – but adding character and inflection to every pick of the strings. Even the otherwise excellent Pass Labs XA30.8 was not quite is clear sounding during Paisley’s full-tilt jam on this cut.

While the absolute resolution was not up to the standards of other amps here, the depth and resonance of most vocals was quite satisfying. Stevie Nick’s voice on Fleetwood Mac’s Tango in The Night LP is a good example. Her unique vocal characteristic is unambiguously apparent. On “Caroline”, you can hear Mick’s quick intake of breath before his singing begins. The way he holds those long notes in “Tango in The Night” is captivating. And the ability of the listener to lock in to his voice while the music crashes all around him is very immersive and enjoyable. The xylophone in “Everywhere” did not have the ringing depth and long sustain as the Inspire single ended triode (SET), Bryston or PS Audio amplifiers, but a good sense of the complete sound is present. 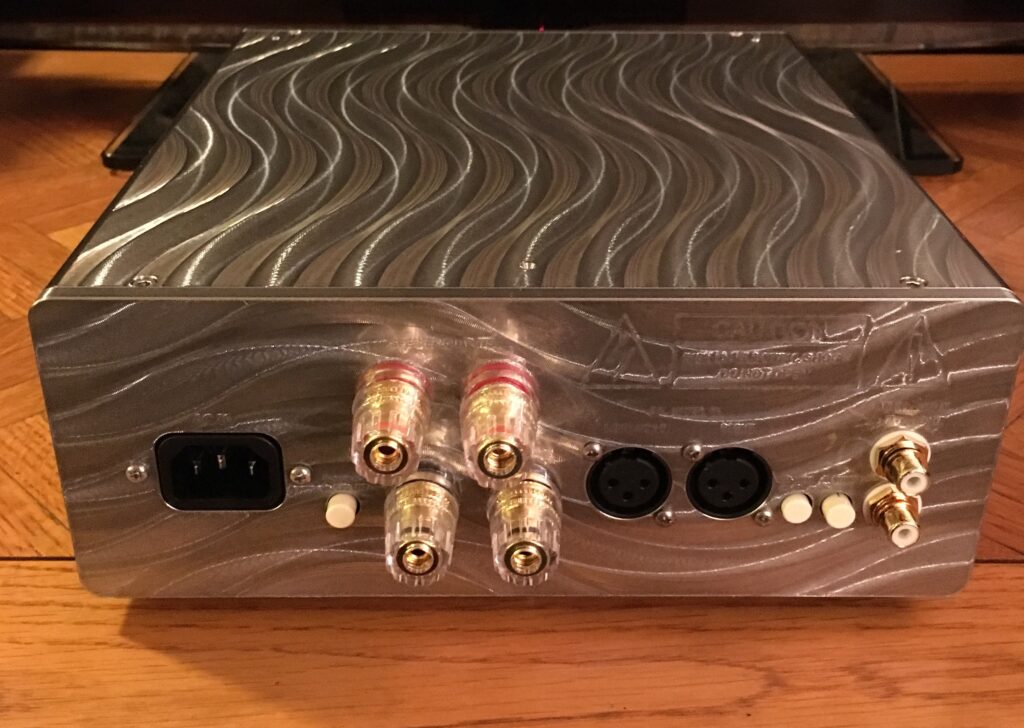 The best character of the Emerald Physics amplifier is the presentation of the sound stage. The 3D stage is huge and offers a believable sense of the size of the performance space. The amplifier energizes the air in the listening room with a continuous sound field, large or small as required by the recording.

The factory recommended Audio Magic fuse, a $175 option, adds a small but easily heard and welcome sense of depth to the sound stage. The black finish, which seemed to be added to the very attractive silver finish, mostly filled in the etched markings on the back panel rendering the stereo/mono switch and the RCA/XLR selector switch unreadable. Thankfully, these were detailed in the printed manual. The speaker connections are unusual, as the left speaker connects on the right and the right speaker connects on the left, forcing the cables to cross behind the amp. All these connections are close together on the compact rear panel, suggesting that extra care be taken during installation. Loose hardware was heard from the amp’s interior, creating a potential hazard of short circuits until the source of the noise was removed. I am told that an extra QC step was added in future production.

The Emerald Physics amplifier has several positive traits. If system compatibility can accept the light weight bass and a noticeable loss of resolution in the upper frequencies, then the amplifier can be recommended. Just watch those regularly discounted prices, and look for even lower cost open-box units, both of which actually makes the MSRP of $2,200 rather amusing.