The E-02 has some significant features. The two machined front panel knobs have the feel of a luxury component, requiring just the right amount of force to smoothly rotate. The left knob selects the input: RCA 1, RCA 2, or XLR. The XLR input is for moving coil cartridges with the XLR phono cables wired properly. The input impedance is selectable using the knob on the right side of the front panel. The impedance, or load, has selections for 10 Ω, 50 Ω, 100 Ω, 200 Ω, 300 Ω, 500 Ω, 1k Ω, 10k Ω, and 47k Ω. The impedance can be changed while listening to help you dial-in (literally) the optimal load for your cartridge.

The gain is fixed at 72 dB with the balanced input and output for MC cartridges, and 40 dB for MM cartridges on the RCA outputs. There is a selector switch on the rear panel to select either the RCA or the XLR output connections. The three feet are unique: a ball and cup isolation design, with the bottom section “floating” to assure full and stable contact on any surface. 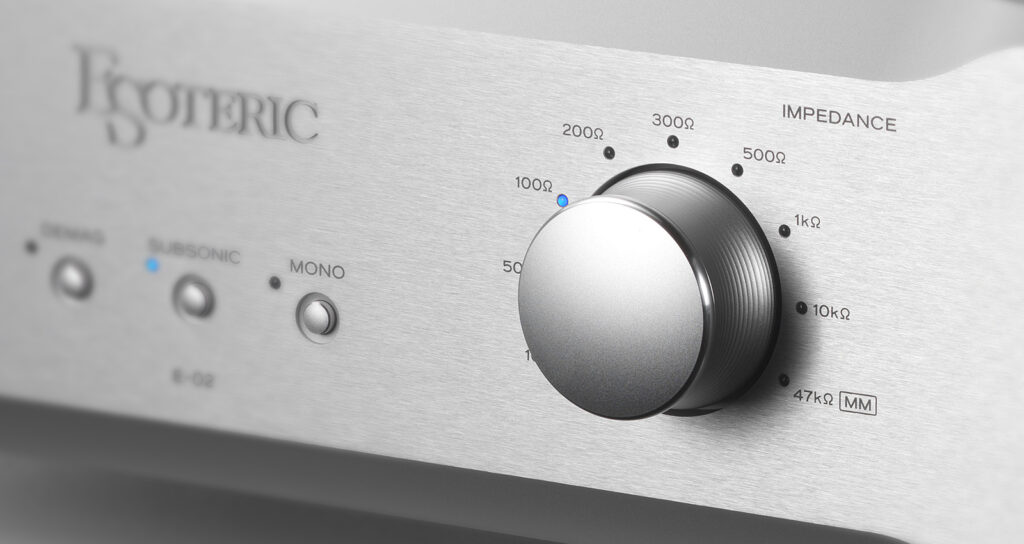 There are push button switches on the front panel for demagnetizing a cartridge, subsonic filter, and a mono switch. There is no mute switch, although the input selector knob can be used as a mute by selecting an unused input. The casework is flawless natural aluminum color, and the unit weighs a very solid 27 5/8 pounds. The E-02 operated perfectly during the review period; a silent partner.

Two very different moving coil phono cartridges were used to evaluate the Esoteric’s performance: a Miyajima Destiny, $7.5k, which has a DCR of 16 Ohms and 0.23 mV output, and a ZYX UNIverse Optimum, $17k, sporting a DCR of 1 Ohm and an output of 0.15 mV. These cartridges were auditioned on both Tri-Planar U2 SE and Origin Live Agile tonearms, installed on a Clearaudio Ovation turntable with its battery power supply and Outer Limits ring clamp. The factory XLR phono cables on both tonearms worked perfectly with the E-02.  The phono preamps used for direct comparisons are the BMC MCCI ULN and the Soulution 325 preamplifier’s internal phono preamp. System amplification is a Benchmark AHB2 powering Magico S1 MkII speakers, lightly augmented in the deep bass by a pair of JL Audio e110 subwoofers.

The E-02 presents a wonderful sense of space with an ambient sound field as large and open as the recording dictates. Studio recordings are clearly exposed as being recorded in small spaces, regardless of the amount of reverb added in post-production. The sense of the sound stage being completely detached from the loudspeakers is eerily convincing, transporting the listener to the original recording venue.

The 3D soundstage is a strength of the Esoteric phono. Stage depth is the best ever heard in this listening room. The room has enjoyed a number of upgrades, and heard hundreds of components, over its 30 years of hosting this listener’s audio obsession. Many components can present a well formed left-to-right stereo image, but the perception of the depth – and height – of the sound field is where a truly excellent component demonstrates its superiority. If you place a large sound stage high on your list of audio system priorities, the Esoteric E-02 will make you very happy.

A large, realistic soundstage requires exceptional resolution from the phono preamplifier to maintain the microscopic phase relationships embedded in the recording. This also requires a very quiet, noise-free phono stage to let the music through unmolested. The Esoteric E-02 is one of the quietest signal-to-noise ratio phono preamps: 80 dB for MC and 100 dB for MM. This results in extreme silence between notes, which is often described as “black backgrounds”. For the E-02, think Black Hole darkness and imperceptible self-noise.

The E-02 delivers room shaking, highly detailed bass on Michael Jackson’s final album, This Is It. The four LP box set is generally well recorded and clear of effects usually added in the studio. There were moments during “I Just Can’t Stop Loving You” when Michael’s image in the listening room was wonderfully developed, right there. The E-02 also delivers a great sense of completeness, with rich tonality and long-lasting harmonic trails. The bass character is just a bit tube-like, being highly resolved, especially in the upper bass.

Male vocals have remarkable depth and richness. The clarity of music with several singers is wonderfully developed and apparent. “Lost in the mix” is a fault of lesser phono preamplifiers, but not the Esoteric E-02. If it is in the recording, you should hear it. The entire midrange has so much texture and substance that the air is energized with a credible image. All vocals, male and female, present a fabric of space, a hologram. Very enjoyable!

On the Donald Fagan LP, The Nightfly, the saturated midrange and overall detail is enchanting. On “Goodbye Look”, the vocals are faultless. The bass line in “Walk Between Raindrops” is very easy to follow throughout the song with outstanding resolution in the mid-upper bass. On “Glamor Profession”, from Steely Dan’s Gaucho LP, the voices are nicely separated and individualized.

The upper-midrange and treble is completely and utterly grain-free, similar to single-ended triode performance. No grain, grit, or harshness with impede on your listening enjoyment. Less than excellent recordings, especially those recorded “hot” with repeatedly red-lining the recording meters (clipping), can sound hard and coarse. This is correct and is a feature of high-resolution playback systems. The upper treble is very smooth with sweet, nicely extended highs, lacking glare or brightness.

The E-02 offers very dynamic, impactful performances. Both large scale dynamic power and much smaller instantaneous changes in volume are delivered with punch, speed and leading-edge clarity. This is sometimes surprising because the overall tonal balance is so correct and continuous that the temptation is to turn up the volume. When those explosive moments happen in the music, they really pop and you feel the impact, possibly flashing the clipping lights on the power amplifier. (This actually happened only once, but I am looking forward to recreating the event.)

Piano tone is stunning. The vibration of the strings can clearly be heard. The character of the E-02 is the same whether hearing the piano’s lower or upper keys, left hand or right hand. The octave-octave tonal balance and resolution density remains linear and correct. Very few components of any type really do justice to the complete sound of a piano. Some fail because they favor one side of the keyboard or the other. 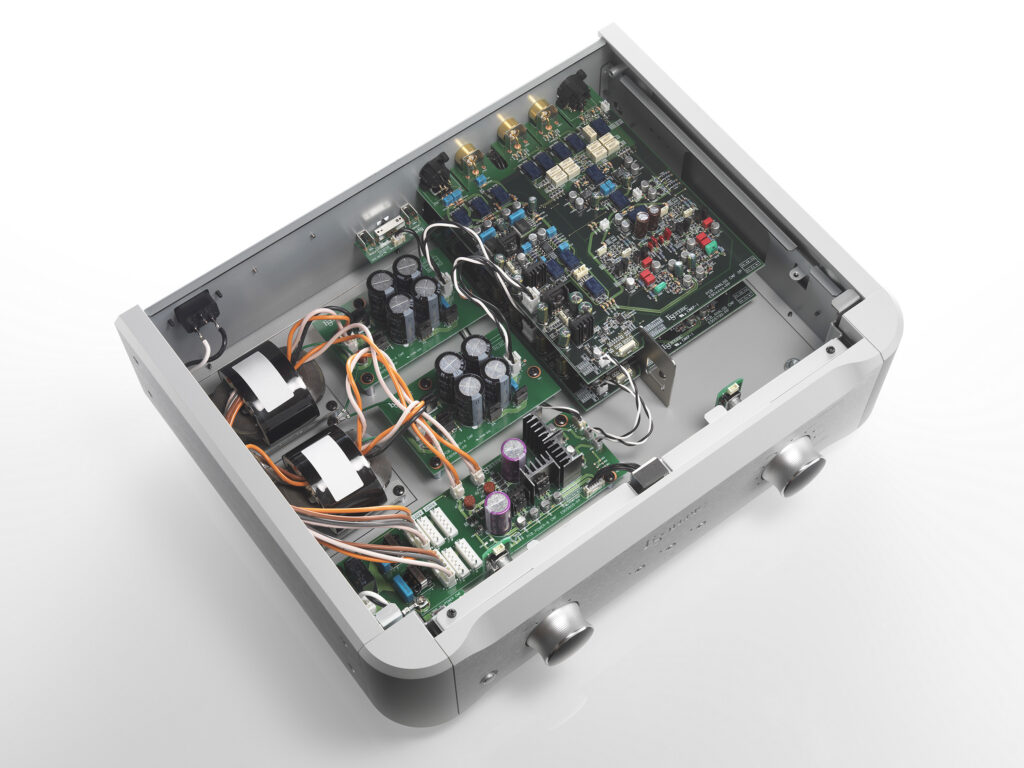 The character of the Esoteric preamp is neutral and resolving, with rich and creamy vocals. At this level of performance, the entire presentation is excellent. Finding a character will more likely expose some tonal imbalance or strong character in one or more other components in the audio system. It is a processor of beautiful music, fast and dynamic, but never bright or harsh. This is similar to the sound of the phono stage in the Soulution 325 preamplifier; however, the Esoteric delivers greater resolution and a larger sound stage.

The Miyajima Destiny cartridge sounded best when loaded at 1k Ohms, while the ZYX Optimum seemed to prefer 500 Ohms. The sound with either cartridge was often fully involving with the E-02. I preferred the relatively more precise upper frequencies of the ZYX over the relatively warmer, more midrange-centric balance of the Miyajima with the Esoteric phono preamplifier. These cartridges are equally “good”, but with slightly different characters. This preference is not so clear-cut when using the BMC MCCI ULN phono stage, which offers more extension and air in the upper frequencies.

Auditioning and reviewing the Esoteric E-02 phono preamplifier was a real pleasure. It never offended with unwanted electronic artifacts, or failed to deliver a huge, enveloping sound field. The dynamic performance is faultless, and the resolution is consistent from the bass to the treble. This is a beautifully made component which should outlast anyone alive today. The Esoteric E-02 could easily be rated a “10 LP” component in a different system, or with different LPs spinning on a different LP platform. The Esoteric E-02 is a highly musical phono preamplifier that warrants your audition.

This review would not have been possible without the very kind support of Keith Haas, National Sales Manager at Onkyo USA, including the Esoteric and Teac brands. Thank you!