The Final 500 electrostatic loudspeaker can be an excellent performer when used correctly. This is a special use speaker that requires a compatible system to work optimally. To achieve their potential, and to justify their $4500 cost, you will need to provide two special considerations which are detailed below.* As delivered, they are not “plug and play” for full enjoyment, and are suitable mainly for background music.

They are limited in two specific areas: bass extension and power handling. These are interrelated. The electrostatic membranes do not have much travel, and because of this as the sound volume increases, the speakers’ ability to reproduce louder bass decreases. This makes it difficult to properly match them to a subwoofer because the crossover point for a smooth blend between the Final panels and the subwoofer seems to change with volume. The louder you listen, the higher the crossover point because the panels simply run out of travel and the bass gets relatively weaker. Even though the Final 500 is specified to reach 45 Hz on the low end, it will only get there at low loudness levels.

These speakers are light in weight, and you can easily lift one with one hand. And, like some other electrostatics, they are almost transparent which makes them less visually imposing than their height would suggest. The speakers are quite attractive in an ultra-modern setting. The aluminum cylindrical sides flanking black perforated metal screens, and a black oval base make a visually appealing package. The small footprint and narrow design will make them acceptable where other large and wide planar speakers might not be.

The Final 500 speakers include a Central Unit which is a component sized box that is powered by a wall-type power transformer and provides the high voltage that the electrostatic panels require. The power transformer that came with the review sample was marked “Bose”. Your speaker cables are connected between your amplifier and the Central Unit. The Central Unit has only banana jacks for inputs, so your speaker cables need to be terminated with banana plugs on the speaker end. Power handling is limited by the Central Unit. As the volume approaches maximum, the Central Unit simply stops the signal going to the speaker. When you turn down the volume, the sound returns. This process usually sent the BAT VK-300xSE amplifier into self-protection mode, with “FAULT” flashing on the display for 30 seconds or so. This same condition would probably blow a fuse in other amplifiers. In the Central Unit submitted for this review, one channel consistently cut out before the other one, indicating poor matching of the modules in the Central Unit. A replacement Central Unit was promised but never arrived.

During a conversation with the distributor’s technical support person, we suspected that saturation of the step up transformers in the Central Unit from too much bass was causing the sound to cut out. This saturation is “seen” by the power amplifier as a short circuit, which caused the BAT amp to go into protection mode. The Innersound ESL 300 amplifier completely ignored this short-circuit condition. Run full range, the speakers were capable of output in the low 90 dB SPL range at 1 meter. At my normal listening distance of about 3 meters, this level was below the loudness level where music becomes interesting and involving. My preferred listening level for rock music is in the mid to high 90 dB range, with peaks hitting around 100 dB SPL at the listening seat. A fix was promised in two weeks, but still not delivered after more than two months.

The speakers come with dedicated speaker cables which were 10 meters in length. These have proprietary connectors on both the speaker and Central Unit ends which makes replacement of the 3-conductor, small gauge cables challenging. Shortening the cables to 2.5 meters helped the overall sound quality significantly as you would expect by eliminating about 25 feet of high voltage wire per speaker from the signal path. Tech support offered to send an improved speaker cable to use between the Central Unit and the Final speakers, but once again, it never arrived. Three strikes…

*Here are two requirements to get full range sound and to be able to listen at realistic volume levels:

First and foremost, the bass signal going to the speakers must be limited. One option is to biamp with an active crossover. I used a single capacitor in the signal path between the preamplifier and power amplifier with a value that would roll off the bass below about 100 Hz. A single capacitor provides a 1st order, 6 dB per octave high pass filter. I used a .033 mf SoniCap Platinum cap with the 47k ohm Innersound 300 amplifier with excellent results. This filter eliminated the problem with the Central Unit cutting out the signal to the panels and allowed the speakers to play as loudly as I wanted. The filter also fixed the crossover point so that a subwoofer could be adjusted with consistent results. This configuration eliminates the possibility of using integrated amplifiers that do not have pre-out and main-in connections. Also, the quality of whatever high-pass filter you provide is critical, and might require an additional interconnect.

Second, as implied above, the use of subwoofers is required. This is recommended by Final, too.

When these two conditions are met – which would occur in a home theater system – these speakers have two significant strengths: warp-speed transient abilities and exceptional coherence from the low midrange up to the highest frequencies resulting from the lack of internal crossovers and their inherent phase-shift errors. The sound had seemingly flat frequency response: there were no peaks or brightness or forwardness or highlighting or any other response aberration noted. Sound staging was excellent as you might expect from a big speaker, with solid images often extending to the left of the left speaker and to the right of the right speaker. I did get excellent sound from the Model 500, and it is the only electrostatic speaker line that I am aware of that will cover the range of 100 Hz to over 20 kHz without help from a cone driver or the use of any kind of crossover between separate drivers. These are very important design features that have significant sonic benefits. Used in a system that limits bass to the Finals below about 100 Hz, and adds a good subwoofer or two to cover the range below 100 Hz, the Finals can provide exceptional sound. 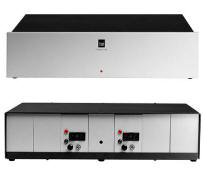 There can be a small tendency to favor the leading edge of musical events over the actual note that produced it, making music with a lot of transient information very exciting but not very rich or warm sounding. A Conrad Johnson MV55 restored most of the music’s richness and provided very deep and full development of fundamental tones, but was not nearly powerful enough to drive the Finals to enjoyable loudness levels. Even though this character is quite small, it is very important for long term satisfaction. It could be partially “corrected” with a change in interconnect. Synergy at work. The combination of the Finals driven above 100 Hz by the Innersound ESL300 amp and BAT VK-31SE preamp was very satisfying. If you have VTL Wotans, Conrad Johnson Premier 8s, or another very high-powered tube amplifier, the Final 500 could be one of the best loudspeakers you will ever hear, and a bargain. With the addition of a high pass filter and subwoofers, the total speaker investment could reach $6000 or more. However, when used properly in a system that maximizes synergy among all the components and the listening room, the Finals could be the “Holy Grail” in loudspeakers for many serious listeners and challenge far more expensive speakers without breaking a sweat.

The 500s like a lot of power: at least 200 watts per channel is recommended. The BAT VK-300xSE integrated amplifier, at 300 watts per channel into 4 ohms, occasionally clipped when the music got very loud. This may be due to the highly reactive nature of electrostatic speakers or saturation of the Central Unit’s step-up transformers which I suspect are undersized and under-spec’d. The BAT amp never clipped audibly when driving any other speaker I tried it with over the preceding nine months. An Innersound ESL 300, with 600 watts into 4 ohms, was a very good match for the Finals in my 12′ x 18′ room. I suspect that most home theater receivers or amplifiers would not be up to the task of driving the Model 500 or larger Final models successfully at the volume levels often required in a HT environment. On the other hand, the speakers simply will not play loud due to the Central Unit’s self-limiting.

The speaker panels are divided unevenly by two vertical strips. The speakers are delivered with one marked “Left” and the other “Right”. (Note: the picture above is actually of two “Right” speakers.) Installed per the markings on the speakers, the sound stage was narrow but very well focused. Reversing the speakers, which places the narrowest portion of the membrane on the outsides, increased sound stage width dramatically, but made finding the perfect toe-in angle more critical to achieve solid, well-defined images. The width of the sweet spot depends on how the speakers are installed, with the latter configuration providing a wider acceptable listening window.

Compared directly to my old Magnepan 10.1 speakers, which had a list price of about $1100 in 1998, I preferred the Magnepans for long-term listening pleasure and musical involvement due to their warmer and more deeply resonant and developed midrange. When the same high pass filter was used on the little Maggies (10 1/4″ x 53″), they achieved similar transient speed as the Finals, although they could not quite match the worthwhile full range coherence of the Finals. However, the high pass filter is not necessary with the 10.1s and an unnecessary capacitor, however good it might be, is eliminated from the signal chain to good effect.

I suggest that these speakers are not “ready for prime time” for high-end audio use as delivered. If you know which end is the business end of a soldering iron, or if you like a complex audio system, the Final 500 might be just what you have always wanted. It is a product with a lot of potential if you are willing to investigate further. I hope this review gives you a good starting point. The speaker’s potential rating is certainly in the 8 to 10 LP range, but that will be for you to uncover.

The following rating reflects the speakers’ overall performance as delivered and installed in a high-end stereo system.