What is a full range speaker? Ideally, there will be one driver reproducing the entire audio range (commonly considered to be 20 Hz to 20 kHz). There will be no crossovers needed, no integration issues between two or more separate drivers, and no time alignment, phase or polarity errors. The output of the amplifier, therefore, would be connected – via the speaker cable of choice – directly to the speaker driver. The result would be extraordinary clarity and freedom from distortion. If this was possible – remember I said “ideally” – the result would be, quite simply, revolutionary. In the real world, there are many drivers and designs that try to cover as much of the audio range as possible, but usually require complex enclosures to maximize their bass responses. This project recognized the limitations in current driver technology, and planned for the use of subwoofers from approximately 95 Hz on down.

Technical stuff:
Here is the plan
for a 20 liter, floor standing enclosure for a Fostex 164 (or 168S – see below) 6″ full range driver. The design goal for this speaker is -3 dB at about 85 Hz to mate with a sub, and control of the limited Xmax through the use of a sealed enclosure. Max SPL (based on Xmax) is around 98-100 dB at the listening seat which is about 8 feet from the plane of the two speakers. The inside is covered with 2 inch “egg-crate” acoustic foam. Internal wiring is Analysis Plus Oval 12. There is a built-in sealed “base”, which is filled with about 20 pounds of sand. Spiked feet are used – Remington Power Hammer threaded studs, pn 100760, which have 1/4″-20 threads. The drivers are mounted using T-nuts. All exterior edges, except around the base, are routed with a 1/2″ quarter-round bit. The total system weight is 65 pounds per finished speaker.

The Qts of the Fostex driver is raised by .12 due to the 3.5 ohm output impedance of the tube amplifier. This lowers the f3 from 110 Hz to approx. 85 Hz.  For more information on the Fostex FE164 driver, click here. You’ll see an almost amazingly flat frequency response and good sensitivity of 92 dB, with a minimum impedance of 8 ohms. This sensitivity suggests a driving amplifier of approximately 20-60 watts.

I used extensive bracing instead of thick walls, which are 3/4″ MDF. Since opposite walls move in opposite directions, cross bracing IMO is very effective in reducing vibration. I used 8 – 3/4″ x 3″ x 6 3/4″ pieces of MDF placed somewhat randomly.  Five of these are in contact with the front and side panels. There is one placed at a diagonal across the interior of the top. The cabinet plans can accommodate the volume of up to eight of these braces. The goal is to “create” many small and dissimilar sized panel areas, so that vibration frequencies will be small in amplitude and not concentrated at one frequency. Random spacing of the cross-braces is very effective for this. The upper rear panel is removable and screwed to a gasketed frame of 2 x 2s.

June, 2002 update: The removable upper rear panel was included for easier access to the interior to add stuffing or make other changes. It turned out that it was not needed. If I did this project again, I would not include the removable back.

Note: I don’t have the tools to cut sheets of wood accurately, so I contacted a local cabinet maker. They supplied the wood and cut it using the drawings above. It took about 45 minutes using their saws, and they charged just $60, including the sheet of MDF. I assembled the enclosures using Titebond II adhesive, and then brought them back to the cabinet maker for the edge routing, for which they charged an additional $15. The total cost including the drivers and all materials is $299.00, including the outboard Zoebel networks.

The Zobel networks are a series .01 mf capacitor and 10 ohm resistor placed across the speaker terminals (resistor to black or – terminal) that reduces/removes very high frequency electrical energy that is so far above the audio band that it is really distortion. It is used when amplifiers do not include this network internally, although no damage has been reported if used with an amplifier that does have one. The result of it’s use can be described as “focusing” the treble range, removing an edge to the sound that you don’t realize is there until it’s gone. Here is a shot of the network installed on the speaker. 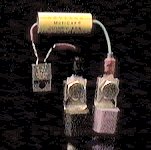 This project is currently under way. The cabinets are complete, although the paint will need to be touched up at some point. The speakers have about 70 hours on them and they are sounding pretty good. Regarding break-in: the speakers sounded coarse for the first 15 hours, improving steadily until they had accumulated about 50 hours. At that milestone, the treble was much improved, becoming smoother and much more detailed.

Installation and operation:
With over 100 hours of use now, break-in seems to be complete, as I have not noticed any changes in the sound recently. I installed the so-called “$0.98 Mod”: a ring of 6mm thick, lightweight foam around the edge of the whizzer cone on both drivers. (This mod was originally developed for a Lowther driver.) The ring was formed using rubber cement on the ends of the foam strip, and the natural elasticity of the foam keeps it in place.

I have to say that this simple modification resulted in an incredible improvement. I completely agree with posts on the Full-Range Driver Forum that these drivers are “unfinished” without this simple mod. It took about 5 minutes to make the foam rings, and another 5 minutes to install them. This is a very significant improvement that seems to have eliminated often-reported resonances in the upper midrange and lower treble range. 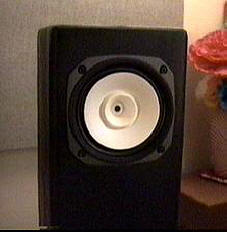 To test this mod, I connected my Tenma model 72-5016 5MHz Function Gen/Counter, turned on the RS digital SPL meter, and ran some sweep tones with and without the foam rings.

There was nothing noticeable on the SPL meter with and without the foam rings, but an audible resonance centered at 1650 Hz disappeared with the ring in place. Another audible resonance at about 2600 Hz was reduced from “annoying” to “barely there”. This was true for both speakers, which have very different physical relationships to side walls in my room.

This was just a quick check, and someday I may make a more complete check, maybe moving the speakers outdoors. But for now, at least a couple specific observations confirm that the rings have a positive effect at certain frequencies.

Prior to the Fostex, I had been listening to Merlin VSM-SEs for over 2 1/2 years, and so was intimately familiar with their sound. Recall that the VSMs use what is arguably the best dynamic tweeter made today – the Dynaudio Esotar T330. At this point in the Fostex project, I can say with about 90% confidence that the Fostex speakers are a significant improvement, especially in the areas of treble clarity and low-level resolution, midrange-to-treble integration and continuity, and an overall relaxing of the presentation that seems like the overall level of distortion has been reduced. An unexpected improvement is also readily apparent in the bass, where allowing the REL Strata III subs to run up to 85 Hz (instead of 28 Hz with the Merlins) provides a much more complete and better delineated bass range. 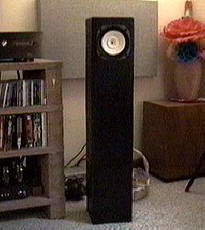 Using a Radio Shack digital SPL meter, the speaker easily puts out 100 dB peaks at the listening seat. This level is very satisfying for any listening I care to do. Here is the finished speaker in my listening room.

After about 200 hours of use, I added some Dacron polyfill behind the driver to absorb and deflect the back wave. This addition removed the last vestige of the resonance noted above. I now consider the speaker to be complete, as it is completely musical, completely engaging, and establishes a new reference within its design parameters.

Update: September, 2002. One year later. The FE164 drivers have been replaced with FE168 Sigmas in the same enclosure as above. Briefly, the sound has been energized with the more expensive drivers. Everything in the range has had it’s “vivid” control turned up. The sound is noticeably more dynamic, and the high frequencies seem to extend higher and have greater resolution. The FE 164 is a very good driver (discontinued, now), but the Sigma is a significant improvement. The drivers sound similar, but the 168S is clearly an improvement. It is spec’d as having 3 dB greater efficiency, but I don’t notice any real difference in volume with the preamp’s volume control used in the same position as with the FE164’s. Thirty to fifty watts will provide high levels in most domestic environments. The Sigma driver does not show signs of distress until the music is much louder than the FE164. At levels in the lower to mid 90 dB range, the sound is clear and dynamic while offering a lot of natural warmth.

These drivers love the Acoustic Zen Satori speaker cables. The internal wiring was changed to Cardas 11 ga, for a small gain in imaging. In February, 2003, the internal wiring changed again, this time to Acoustic Zen Satori for a noticeable gain in harmonic accuracy and low-level detail without highlighting any particular range in the audio spectrum. Both drivers are able to portray very involving harmonic soundscapes with exceptional 3-dimensional imaging, and the Satori wire complements the driver extremely well.

An extended break-in is mandatory for good results, at least 150 hours is highly recommended, as with the FE164. After 100 hours the drivers lose an edge to the sound in the upper midrange. Improved high frequency resolution and extension is also apparent. Approaching 200 hours, the sound seems to have stabilized. To anyone with a DIY inclination: these speakers are worthy of your attention for a high resolution, relatively high efficiency, very low distortion speaker system.Click here for the FE168 Sigma data sheet.

Future plans: Flush mount the drivers. I would also like to improve the appearance by repainting with Jaguar Phoenix Red. Ah, to dream…

Update: September, 2003. One year later.The FE168 Sigma drivers have been discontinued. That is a loss, since this driver in a small, closed box is very, very good. For under $1k, plus a small subwoofer or two, you could have a very fine speaker system. I did.