GoldenEar Technology was started in 2010 by Sandy Gross and Don Givogue. Mr. Gross might be familiar to audiophiles from his association with Polk and Definitive Technology, both of which he co-founded. Mr. Givogue also co-founded Definitive Technology and holds a patent for multi-driver bi-polar speaker arrays. The GoldenEar Triton Seven was born not from some tinkerer’s basement, but from people with extensive knowledge and experience in speaker design, manufacturing and marketing.

There are three floor-standing GoldenEar models with built-in amplifiers for the woofers, and two non-powered models, in addition to a bookshelf speaker. The non-powered, $1400 per pair Triton Seven is the smallest floor-standing speaker in the current GoldenEar product lineup. It has two 5 1/4˝ cast-basket bass/midrange drivers, two 8˝ planar sub-bass passive radiators, and one HVFR™ High-Velocity Folded ribbon tweeter. There is an attractive high gloss plastic top and base, which give a nice appearance to the cloth wrapped speaker. 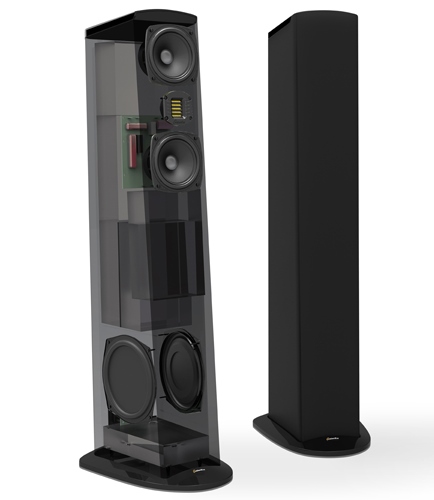 The Triton Seven stands 39 ¾” tall, 7 ¼” wide and 11” deep, and weighs only 32 pounds. At that light weight, they are very easy to move into optimum position. Correct toe-in is very important and some experimentation is necessary as the frequency balance and size of the soundstage can change dramatically. A toe-in which points the speaker directly at the listener seemed optimum in my room. Optimum is the best compromise between best bass, best soundstage, and most even and correct frequency response. The treble response rolls off rapidly as you stand up. The efficiency of 89 dB allowed the Triton Sevens to perform well with only 15-20 Watts.

A glass of wine, two fingers of scotch, or a toke might enhance your appreciation of the excellent overall musicality of the Triton Seven. Put your critical glasses aside for a little while and it becomes apparent that these speakers cover all the important audiophile parameters.

Bass articulation and impact are excellent at low to moderate listening levels. This bass quality makes it easy to follow a bass line in a recording. There is solid response to well below 40 Hz, which is consistent with GoldenEar’s 29 Hz bass spec which does not list a tolerance, such as -10 dB @ 29 Hz. At high sound pressure levels, the bass can become muddy and relatively indistinct. This decrease in performance usually occurred at loudness levels greater than normal. However, someone with a larger room or a preference for louder music might find the Triton Seven to be too small a speaker for their needs.

The midrange is excellent and presents most vocal cleanly, with a large dose of warmth and richness. The upper bass and midrange is very good in the Triton Seven which presents this range with very high resolution and good dynamics, although micro-dynamics in the upper midrange are not proficient as in the lower frequencies. This makes the upper midrange, just below where the ribbon tweeter takes over, sound relatively anemic and thin compared to the lower midrange. Even so, the sound seems generally correct and linear from upper bass to lower treble. The midrange is of such good quality that it seemed that Bonnie Raitt visited my listening room, virtually, on “Cool Clear Water” from her 1994 Longing In Their Hearts CD. Also on that cut is an easy to follow bass line, with a very dynamic drum set positioned perfectly toward the rear of the soundstage. 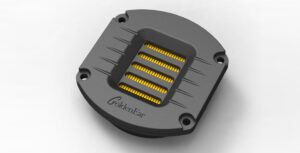 Under the onslaught of Brad Paisley’s guitar in “Make a Mistake With Me” on his 2003 CD Mud On The Tires, the Triton Sevens kept the various musicians distinct and separate. This one cut amply demonstrates the overall resolution and clarity of the speaker. This clarity is a feature of the ribbon tweeter. This tweeter is the star of the design and performs at a higher level than the two bass/midrange drivers, where the warm full midrange meets the fast, higher resolution treble. Both the warm rich character of the midrange and the clear, articulate treble are good, but they do not seem to mix well. This difference in character causes the treble range to be a thing apart from the midrange, not well integrated. This is very loosely analogous to a race car driver who is wearing a full fire suit and helmet, but only sandals on her feet. The Triton Seven includes a very fine tweeter that is better than the midrange drivers. This anomaly might not be present in the $2000 Triton Five, which have apparently more upscale bass/midrange drivers, in addition to four bass passive radiators instead of the two passive radiators in the Triton Seven.

Critical listening aside, the large sound field and excellent upper frequencies contributed to an enjoyable audition that I was not in a hurry to conclude. The “Sevens” play well with a wide variety of amplifiers and presents each amplifier’s unique character clearly.

This is where the rubber meets the road. More money can buy more accurate upper mids, and deeper, more powerful bass, too. During the many hours of listening and taking notes on the performance of the Triton Sevens, my foot was usually tapping and there was some level of boogie happening in the listening room. The result is a good level of engagement. The GoldenEar Triton Seven loudspeakers offer a lot of performance and enjoyment for a modest entry fee.