First, understand that these are two very good, but very different sounding cartridges. They are perhaps a peerless pair of the best performers in the crowded sub-$1,000 realm. Secondly, let me say that most people will not like both of these devices. In most ways that matter, the sound of the Grado Sonata and Benz-Micro Glider cartridges are so distinct that we’re talking a tale of two cartridges here. Since they epitomize the distinctions between a typical moving coil versus moving magnet sound, they make a perfect point of comparison. 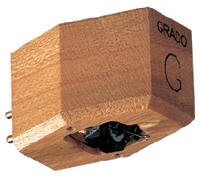 The Grado Sonata is a wood-bodied beauty designed by the great Joe Grado at his family-owned business in Brooklyn, New York. My sample is the medium output 1.5mV. It tracks optimally at 1.5 grams and 47kOhms. It should be an easy match for any phono preamp. I had no problems with my versatile Monolithic Sound unit. Grado calls this model a moving iron design, though anyone familiar with moving magnet cartridges will easily understand how this cartridge amplifies signals from LPs by moving a small magnet between a fixed coil assembly. I recommend a visit to the Grado Labs site. In not terribly technical detail it tells you how the guts of this thing operate. For $500, you get the feeling that you have a quality item with great attention to detail right down to the wood presentation box and wood stylus protector that is included with the Sonata. This bargain price is no mean feat. I’ve been purchasing phonograph “needles” for 33 years now and some units leave you shaking your head as to how they could cost so much. Not the Grado. There is value for money here.

The Benz-Micro Glider H2 (for high output) is a gold beauty befitting its moving coil heritage. With its exposed innards and fragile-looking stylus, setup demands a steady hand. It outputs 2.5mV, and optimally tracks LPs at 2 grams. The exposed boron cantilever may not actually be more fragile than the Grado’s, but you will certainly need to be more careful. At $795 it’s a bit pricier than the Sonata, but nowhere near the top of the Benz line, which soar to nearly $5,000. (Let’s see, should I buy my daughter that used Civic, or upgrade to a new Benz LP Ebony?) This is a well constructed cartridge, but be warned: use the supplied aluminum screwdriver when mounting this cartridge or the strong magnetic field may lead to an accident that will leave you weeping. Contrary to what you might have read, the Glider can be installed with success if you just take a little time and care.

Now on to the sound as these two transducers go head to head. Let’s start with the Grado. Much has been written about the Statement and Reference models since their late 1990s introductions. However, given the quality of sound and construction of the Sonata, I feel a fresh perspective is warranted for the potential owner. I carefully mounted the Sonata on my Roksan Radius V with Nima arm. I love this cartridge. That’s not too strong a statement. I’m listening to it now on a pair of (appropriately) Grado 225 headphones through a Musical Fidelity X-Can 3. The feeling of the musicians being right there performing for my benefit is very strong. Hello, Chet Baker! The Sonata is delightful. It is very close to lifelike in the midrange, with an uncanny ability to make vocalists sound distinctly real. Solo acoustic instruments – piano, guitar, violin – appear holistic as well. (Holistic: “Relating to or concerned with wholes or with complete systems rather than with the analysis of, treatment of, or dissection into parts”.) There is a strong sense of hearing each complete note from the initial attack through the instrument’s resonance trailing off into its decay. Listening to Glenn Gould performing Bach is extremely moving with this cartridge. The sound of the Sonata is continuous and the brain simply has to fill in less of the music because very little seems as if it’s missing. The glory of this cartridge is in the midrange. Its ability to speak to the heart of the music and show the superiority of vinyl to digital is, to these ears, unimpeachable. 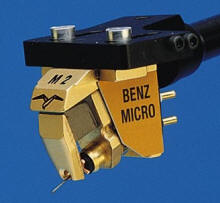 But man does not live by midrange alone. Compared to the Benz (and CD), the Grado is somewhat rolled off at the frequency extremes. Not severely, but noticeably. The bass is ripe and on some recordings, perhaps a little overcooked. The Grado bass has a great big groove that moves the music along, but with certain albums the fundamentals can sound sloppy, and a bit much. Some may prefer this, but after years of digital conditioning the listener to tight, controlled nether regions, I wonder. On the other hand, the greatest drawback with the Sonata may be in the treble. Unlike a moving coil, the high frequencies rarely soar, or seem nearly as effortless. Cymbal strikes and other high frequency sounds seem less defined. The immediacy in the mids is lacking further up and if you know there are more high frequencies present in the recording, you may find this cartridge wanting in that area.

The elliptical stylus on the Sonata is not kind to an album’s surface noise. Ticks and pops even on the quietest, newest, and best cleaned LPs are still noticeable. If you like the Grado sound, as I do, you’ll find a way to listen around this character, but it is still present. For some, this extra surface noise may be a deal breaker, especially compared to the dead silent background sound of CDs that the latest generation of audiophiles may expect. The Grado is not the best tracker, either. I’m not sure if it’s the more massive body or the elliptical stylus, but on heavily modulated passages on certain records there is some slight breakup that can cause the occasional wince or two. This device has limitations, but it does have nearly the best of the characteristic sound for which moving magnets are popular.

The Glider. What an appropriate name. This gold-bodied beauty seems to sail through all kinds of music. It distinctly out tracks the Grado. I rarely experience mistracking with the Benz. It seems completely unflustered whatever kind of music you throw on the turntable. Cannon shots on the ubiquitous 1812 Overture? No problem. Shock and awe from the stygian bass of U2’s Joshua Tree? The Glider is unfazed. I think you would need to spend many multiples more to get better tracking than this cartridge, properly set up. It is quiet, too. Even my most beat-up LPs have a much lower level of noise and groove rush with the Benz than with the Brooklyn contender. And the lower end of the frequency extreme is equally well represented, an obvious improvement over the Sonata. The treble is delicate and airy, never grainy, absolutely shimmering and, on the best recordings, close to what one might hear in a live environment. I had the opportunity to hear Brad Mehldau’s superb combo recently at the Village Vanguard in NYC. The sound of the live cymbals resonating with me from that sublime experience seemed scarcely better than I hear from the Benz. The decay of bells, triangle, or brushes on a snare drum all seem to go on forever with the Glider.

“No free lunch” you’re thinking? How true. The best way to describe the Glider is precise. While vocals, trumpets, and sax are holographically present, they are definitive and to the point, like that stern teacher in third grade: a lesson in precision. In some ways the Glider produces vocals like you wish CDs would. However, this critical musical range needs more flesh on the bone than this moving coil seems capable of producing. Like many MC’s I’ve had in house, the mids seem spot lit which can lead to a kind of discontinuousness with the frequency extremes. This tends to skew the performance and make me more aware of the discrete parts of the music. It’s as if the bass, midrange and treble are somehow not quite tethered together, which causes my brain to focus on the parts and not on the whole that the playback system should be able to project. The Benz will reveal apparently everything on your precious LPs, but sometimes it seems that it is a tad more than you wanted to know. This cartridge is honest to a fault and in the process seems lighter than the Grado. It leaves me wanting for … more? More of the moving coil sound, or just more body to the music? Or maybe just more integration with the bass and treble. That will of course depend on one’s personal taste.

The Grado Sonata fits my musical enjoyment requirements nicely. I wish it were quieter. I wish it tracked a little better, too. But I’ll easily compromise on these elements to get the bigger picture. The Grado connects me to the music more than the Benz Glider does. In their unique ways each of these are very special devices, but for now I’m sticking with the wood over the gold.