It is summer and Denver often sees temperatures in the high 90s. It is summer and gasoline is $4 a gallon, which hopefully is a situation that we will look back on in amazement that it ever cost so much, and not that it ever cost so little. Food costs are up, too. The house air conditioner is running almost 24/7 taking money out of my wallet in direct proportion to the cold air blowing into my house. I need an amplifier that runs cool and sips electricity like a hybrid Prius sips gas. It needs to sound good, too. 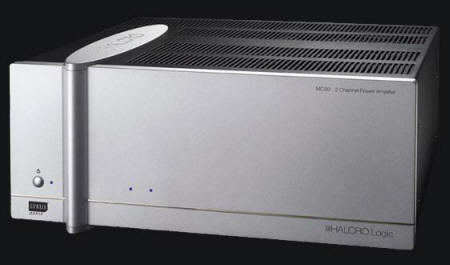 Halcro has become well known as the maker of some of the world’s best – and most expensive – solid state amplifiers. Their Halcro Logic product line targets the home theater market and carries prices that allow a far greater number of people to realistically consider becoming Halcro owners. According to the Web site, the Halcro Logic MC20, list $5000, uses “LYRUS™ technology to ensure the maximum detail and impact is drawn from all soundtracks.

“The Lyrus™ circuits contain patented distortion canceling circuitry so that at high powers the Lyrus™ class-D amplifiers are on a par with well designed traditional class-A or -AB or -B amplifiers. Technically the intrinsic distortion can be attributed to an intrinsic time distortion (advanced phase) which varies in a non-linear manner with signal level (level squared law). The Lyrus™ circuits introduce a compensating time variation to the reference clock signal which controls when the output signal switches.

“The Lyrus™ amplifiers produce about 1/5th to 1/10th of the distortion of typical well designed competitors at high powers.” (Quotes from http://www.halcro.com/logic/lyrus.asp.)

Halcro specs the amplifier as being 94% efficient at converting electricity from the wall into electrical energy going to your speakers. Power consumption is 14 Watts idle and only 22 Watts when the amplifier is driving 350 Watts into a 4 Ohm load. I don’t understand either! How can you get 350 Watts out with only 22 Watts in? Whatever the physics are used to seemingly defy (Halcro) logic, it works: the amplifier becomes just slightly warm to the touch at any volume. (A follow-up with Halcro clarified this seemingly impossible specification. The amplifier consumes 22 Watts when it is putting out 350 Watts to the speakers. The total power drawn from the mains is actually 372 Watts.) The amplifier is rated at 400 Watts per channel into 4 Ohms at 0.007% THD (@1kHz). The input impedance is on the low side at 10k Ohms balanced XLR or unbalanced RCA. The weight is a reasonable 47 pounds. There are front panel blue LEDs for power and to indicate faults in either channel. There are remote power triggers, and Ethernet and RS232 connections, too, for complex home theater or specialized installations.

The power switch is on the rear panel. The front panel power button switches the amplifier mode between standby and on. The MC20 will operate on any voltage input from 100-240V with no internal modification and is shipped with both US and European power cords. The only gripe I have about installation results from the speaker binding posts. They are plastic covered CE approved which require the speaker cables to be inserted in one direction only. The wire direction of the left channel pair of binding posts position the speaker cables directly on top of the power cord.

The sound of the MC20 is a welcome surprise. I have listened to several other “digital” amplifiers. They each had their charms, but none presented a complete musical picture. There is usually good impact and control in the bass, but with a lack of resolution and low-level detail. In the treble, other Class D amps often exhibit decreasing resolution with increasing frequency which is probably a result of the filters used to remove the amplifier’s switching frequency from the audio signal. Their handling of the frequency extremes was a deal breaker for a satisfying long-term relationship.

The MC20 is different than these Class D amplifiers. The first hour or two of listening to a new component, after break-in and warm up, usually provides a reasonably complete objective impression of the sound. The characteristics of soundstage size, transient speed, resolution, bass power, midrange neutrality, and extension into the low bass and upper treble are apparent early in the audition. It usually takes days or weeks to understand the nuances of why a component moves me musically, or why it does not. I noticed no problems during that early get acquainted period, just the desire to hear more music through the MC20. We’re off to a good start.

I mentioned the soundstage above, so let’s begin with this important parameter. The MC20 carves out space like few other amplifiers. Each performer obviously occupies a specific location in space, both laterally and in the depth dimension. Individual performers are slightly less 3-dimensional compared to the tubed Manley Neo-Classic 250 amplifiers, but certainly competitive with any other solid state amplifier I have heard up to about $10,000, including the $9500 Conrad Johnson Premier 350, $7500 Pass X250.5, and $6500 BAT VK250SE. There is no blurring of images, just an easy ability to look directly at any sound and clearly discern the size and location of the performer, which is often outside of the space between the speakers. In fact, the excellent imaging ability of the Halcro amp made the speakers disappear more than usual. A competent analog source will demonstrate this convincingly.

Transient speed, often called rise time, impact, macro-dynamics, and punch, is among the best of any amplifier in existence today. There is a clear and forceful leading edge to every sound. This is especially noticeable on percussion. That instantaneous – and instantaneously gone – touch of a drumstick on a drum head or cymbal is presented completely unambiguously. This makes drums sound especially realistic. I gained a new appreciation for good drummers. The differences between snare and tom have never been more apparent. The subtle tap, tap, tapping on a cymbal is clear and clearly enjoyable. I do not recall being startled and amazed more often by these fleeting sounds by any other amplifier. Ever. The MC20 does not “turn on a dime”, it turns on an electron! The dynamic performance of the MC20 is easily world-class and makes many (most?) other amplifiers sound soft and slow. This does not mean that the MC20 is a hard or cold sounding component – far from it.

The MC20’s transient ability could just be a hollow trick if the “baby Halcro” did not have the finesse to carry it off by allowing a very high quality of succeeding micro-harmonic content to shine through 100% of the time. All amplifiers (and other components, too) walk a fine line between sheer speed and a golden enveloping warmth. This is similar to the bit depth on digital images. At 24-bit, you see 16.7 million colors. At 1-bit, the image is either black or white. The MC20 is far, far closer to full resolution 24-bit panoramas than to stark, bleached 1-bit images.

The MC20 can boogie with the best. Listen to “Day at the Dog Races” on Little Feat’s Time Loves a Hero LP (Warner Brothers BS3015). With exceptional timing and pace, the MC20 takes you on a wild ride that is great fun. The sound is relaxed, resolved, and rewarding at any volume level. Again, that powerful leading edge dynamic ability is a definite attraction of the MC20.

The bass range is excellent, too. The bass is very deep and powerful, and the lowest notes that your speakers can produce will be offered with excellent power and control. The bass presentation is competitive or better than any of the amplifiers mentioned above. The sense of control, power, and more importantly, fine resolution is excellent by any measure or standard. The Manley 250s push just a bit more low-level bass detail to the speakers, but the Halcro wins for power and control. I have not heard Halcro’s $43,000 DM68 amplifiers in my room, but really had a hard time imagining how they could beat the MC20 in the bass. In other words, the bass of the MC20 is very satisfying.

So is the midrange and treble. In fact, the MC20 could easily join the “reference amplifier” category but for two reasons, one definable and one hauntingly imaginary. The Manley Neo-Classic 250s have somewhat more harmonic depth or low-level resolution in the upper midrange and treble. Good tube amplifiers often manage a small but important degree of humanness that helps singers to sound more present and alive. This is a common trait of many tube amplifiers over their solid-state competition. But let me be clear: this small – and I do mean small – relative deficiency of the Halcro is even smaller and less bothersome than I often heard from the solid-state competition mentioned above. These competitors also have serious issues in certain areas of the audible frequency spectrum that the Halcro avoids. For example, the BAT amp has a level of “texture” in the lower treble that is not conducive to relaxed enjoyment of most music. OK, I’ll come out and call it a fine grain. The Pass amp loses resolution and sweetness as the volume leaves Class A at 15 Watts and turns noticeably harder and colder at higher levels. The CJ amp has a different character in the midrange than the treble, making it sound discontinuous. The Halcro MC20 shares none of these deficiencies. The fact that the MC20 is fully competitive with the better performers at this level indicates just how good this “green” amplifier really is.

The imaginary reason to not include the MC20 in the reference category is probably just plain silly, but could result in not appreciating the significant strengths of the MC20 and simply enjoying the sound now and forevermore. It is the root of the poisonous “audiophile nervosa”: You know, just because this is the baby Halcro, that there are better amplifiers out there. The Marantz MA9S2 mono amplifiers, at $15,000 per pair, are one example. But for amplifiers which cost less than ten grand, the MC20 is unassailable.

Digital amplifiers usually have an excellent midrange, great separation of musicians, and a powerful dynamic punch. The MC20 owns these strengths. When the entire system is of the caliber of the MC20, the rules change. It is no longer a question of finding components with complementary colorations, but of the time consuming and painstaking task of eliminating the weakest links, one by one. The Halcro MC20 is an outstanding performer in its price range and above, and one you should hear in your system if for no other reason than as a data point in the evolution of Class D amplifiers.

My thanks to Myron Hawthorne at C & M Home Theater. This review would not have been possible without Myron’s kind assistance.