I debated for a long time whether or not to write this review for two reasons:
1. This speaker has “good buzz” and I wondered if mine would be the lone voice in the forest of opinions. This dichotomy would be ongoing proof that YMMV.
2. My recent experiences with speakers provided such a glaring contrast to the sound of the Harbeths that a paradigm shift in my expectations would be required to appreciate their presentation.

Let me address number 2. There is a period of time after a new component is installed during which the listener becomes acclimated to its sound. For the first minutes and even hours, we tend to hear the differences between the current component and the newly installed one. After that period, we adapt and adjust to the sound of the new component and become more comfortable with its overall presentation. This second phase can last for weeks and is the period during which we decide if we can live with the faults and if those faults are tolerable in light of the strengths. 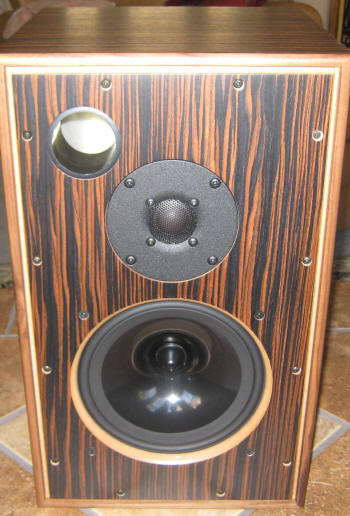 I used the $5200 Monitor 30s on 24” stands and also sitting on top of my Perfect Subwoofers, isolated with Black Diamond Racing #3 cones and Herbie’s Small Cone/Spike Grounding Bases, and other devices. They were connected to either an Underwood HiFi-modified PS Audio C100 integrated amplifier or Manley Neo-Classic 250s. The C100 is a 5 pound ICEpower powered solid state design, and each 70 pound, 10 EL34 power tubes per amp, monoblock from Manley is all tube. Speaker cabling was single-wired Audience Au24, the new Au24 “e”, or, just to be sure that the excellent Audience cables were not negatively impacting the sound, some single- and bi-wire DIY solid core Teflon® insulated cables I keep around for just these occasions. The source was primarily my SOTA Cosmos IV turntable, TriPlanar VII tonearm, and Benz LP cartridge, fronting a Manley Steelhead phono stage. I also employed a Tascam CDRW900 Pro CD recorder/player, used as a transport feeding a Parts Connexion-modified Benchmark DAC1 D/A converter.

The Monitor 30s have very good resolution from the mid bass to the mid treble. Male and female voices have good-to-excellent resolution with a full and natural sound. The upper treble is a bit on the soft side, an effect of a relative lack of extension into the highest frequencies. The bass is surprisingly good for a stand mounted speaker, although adding my Perfect Subwoofers provided greater bass extension, dynamic impact, and sense of the size of the recording venue. In a smaller room than my approximately 12 x 18 x 8 foot room, the M30s might provide all the bass a listener might need at moderate volumes. The transition from the woofer to the tweeter is very good with only a very small discontinuity around the crossover frequency that is noticeable as a change in the character of a tone through this narrow range, probably a result of phase shift.

The Monitor 30s could play quite loudly without any signs of stress, although not if there is a lot of low bass content. There is just so much a 6 inch driver can do, after all. If your listening includes organ music, heavy metal or synth, you’ll need a subwoofer or two, and a high pass filter to keep the low bass out of the Harbeths. The ability of the Harbeths to create a realistically sized and proportioned sound stage is outstanding. The listening window is about 3 people wide, so you will never feel that you cannot move around and hear the Monitor 30s at their best.

The previous four years have seen mainly “boxless” speakers in my listening room. There have been three different models of Magnepans followed by the groundbreaking Gallo Reference 3.1s. These speakers share a freedom from colorations from the midrange to the mid-treble that is a difficult feat for conventional box speakers to achieve. This “boxy” character might be described as a relative of intermodulation distortion in that the sound of the vibrating box is usually at a higher frequency than the sound produced by the woofer or midrange driver, has lower volume than the direct sound, and contains musically non-consonant sounds. In other words, a vibrating box is not a musical box and adds a layer of discordant crud to the sound. The Monitor 30 speakers sound best listening on axis, pointed at the listening seat. This configuration minimizes the sound of the enclosure.

Comparing violins and other acoustic stringed instruments to loudspeakers has no value. The similarity ends in the use of trees for raw materials. Loudspeakers do not create sound. Their literal function is this: Convert electrical power into acoustic power. They take an electrical input and, with luck, skill and science, attempt to transform that electrical energy into acoustic energy. The job of the various drivers is to reproduce the input signal without adding additional acoustic energy (sound). I suggest that the concept of the speaker enclosure adding a positive contribution to the sound of the speaker is misguided. Most loudspeaker manufacturers demonstrate their understanding of this common belief by trying to eliminate as much vibration from their loudspeakers’ enclosures as possible. In fact, much of the improvements in the quality of sound reproduction in recent years has been in building “good sounding”, e.g. dead, enclosures. Harbeth, on the other hand, welcomes the box sound: “…think not of a rigid box, but of five critically damped and tuned panel sub-systems…”. In the case of the Monitor 30, this design philosophy is used to the detriment of the enjoyment of music due to an ever-present textured fog of sound.

I tried different things under the speakers, placed heavy objects on top of the speakers, and moved them around the room far more I usually do with other speakers, all in the attempt to enjoy their presentation. I tried two very different sounding amplifiers and three different speaker cables and was rewarded with basically the same set of problems. The significant contribution of the enclosure to the overall sound made evaluating this speaker a test in patience and endurance, one that I was happy to conclude. If your reaction to the Monitor 30s is different than presented here, please see #1 above.

Reader’s Comment:
I just wanted to tell you how spot on your review of Harbeth speakers was. I just purchased on spec a new pair compact 7 es3 speakers based on numerous reviews and information from the Harbeth website. BAD IDEA! I was so dissapointed in the sound. Your review described my listening experience exactly. I know your review was for a different Harbeth speaker but you might as well have been describing the Compact 7s. The store I purchased them from let me return them. They thought I was crazy for not enjoying them and accused me of not knowing what real quality speakers should sound like. Anyways, I feel somewhat vindicated after reading your very astute review.