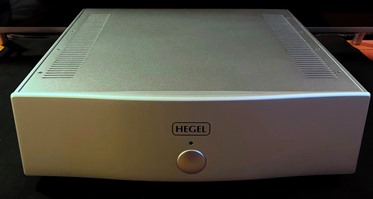 The Hegel H20 stereo power amplifier was of interest because of its use of “feed forward” error correction. Briefly, negative feedback – which many amplifiers employ – seeks to correct amplification errors after they have occurred. One problem with this is that each time errors are corrected, more errors are created in the feedback loop. Feed-forward error correction seeks to fix problems before they begin. At least in theory.

Hegel’s implementation of this error correction is called “SoundEngine”. From the Hegel Website: “The Hegel SoundEngine technology is not using any kind of global negative feedback, it is using local and adaptive feedforward technology if there should ever be any need for cancellation of distortion within the audio amplifier stages.” Please use the link to Hegel’s Website at the bottom the page for an in-depth discussion of SoundEngine and complete specs for the amplifier.

This listener’s problem with push-pull power amplifiers began several years ago when a pair of mono Cary CAD-805AE amplifiers visited my listening room. The Cary amp is a large, single-ended tube amp with just one output tube, either an 845 or 211. (I preferred the 211.) After hearing how pure and wonderful a single-ended amplifier can deliver music, the Cary was followed by a First Watt J2, a Dennis Had Inspire Fire-Bottle amp, and Valvet E2 and E2SE: all single-ended amplifiers. Several Class D amps have also been in residence recently. After experiencing these amplifiers at length, the particular character of push-pull amps is clearly identifiable.

Some of you focus on the quality of the soundstage when choosing components, and some are more sensitive to midrange performance or other characteristics. I am particularly aware of problems in the upper frequencies, and this is where the artifacts of the push-pull “reassembly” of the audio signal become obvious. These frequencies simply sound broken, as if each note, each sound, is not the smooth, pure sound of whatever created it, but are presented with an added edge that is apparent in every sound. Visually, it would appear as if a sine wave from the non-inverted section of the amplifier’s output stage and a sine wave from the inverted section were not perfectly symmetrical or identical. Common crossover distortion is probably a large part of this anomaly.

The $2,999 Benchmark AHB2 amplifier, which has been the main power amplifier here for over a year, is a push-pull design which also utilizes a feed forward error correction technology. In this amp, the tech is the patented THX AAA™ circuit. The main purpose of this review is to determine how Hegel’s feed forward SoundEngine circuit competes sonically against Benchmark’s feed forward THX AAA circuit, as implemented in these two power amplifiers.

The H20 arrived brand new and so the break-in began. At the 1 hour mark, the sound was unpleasant. At 25 hours, there was some potential showing through with a large sound stage. At 50 hours, improvements were noted, with very good lower frequencies. At 150 hours, the upper midrange and lower treble still showed some congestion and lack of openness. The sound seemed to stabilize at 200 hours of use, so let’s start there.

The $5,750 Hegel H20 is very dynamic, and the Magico speakers let this quality through seemingly unimpeded. With percussion, particularly tympani and bass drums, the entire sound field pops with explosive power which compresses the air the listening room. Listening at the maximum of the safe sound pressure levels of 80-85 dB SPL slow response, which results in ~105 dB peaks, the powerful music demands attention. Hopefully, the neighbors won’t!

In the song “I Will Walk With You” on the Bruce Hornsby LP songs from the southside (SIC), each performer and singer was easy to follow and distinct from other players. There is good micro-detail and resolution across the octaves. But on the “southside”, cymbals sound like broken glass.

“Brave New Hope”, on Basia’s Brave New Hope CD, is a good demo cut for dynamics, bass performance, and midrange believability. The Hegel H20 does well on this song, although Basia’s distinct voice doesn’t soar as freely and openly as with the other amps. This cut was ripped by JRiver Media Center as a 16-bit 44.1kHz WAV file. JRiver then sends an upsampled to 32-bit 174kHz data stream to the DAC. These settings provide 10 Audio’s preferred Whole Number Upsampling™ – 2x for bit depth and 4x for sample rate.

When Bonnie Raitt sings “Sweet Forgiveness”, her voice has nice texture and depth. There is something limiting connecting to the performance, an overlay of discordant sound. The sound is very high-resolution and linear, not favoring any large or small portion of the audible spectrum. Although the H20 doesn’t sound noticeably “fast”, it takes easy control of the speakers and can welcome the listener to forget the gear and just enjoy the show.

The Benchmark AHB2 amplifier presents Bonnie’s vocals on “Sweet Forgiveness” with far greater openness and continuity, and with a reach-out-and-touch sensation that is largely absent with the Hegel amp. Listening to the Benchmark amp for hours on end is a pleasant and pleasurable experience. However, the coarse push-pull character of the H20 quickly grows tiresome, and then acutely annoying after an hour or so. Many more examples of this conclusion were noted during the audition, but the sound of the H20 was consistent on all sources.

To answer the initial challenge posed above, the two amplifiers sound very different on the micro level. The sound of the Benchmark AHB2 amplifier has the purity and unbroken continuity of a very good single-ended amplifier, which is the Holy Grail of audio. On the other hand, the Hegel H20 sounds like a good push-pull amp with the benefit of the SoundEngine technology not apparent in audition.