The new Jones Audio PA-M300 monophonic amplifiers finally and definitively make obsolete the idea that solid-state sound cannot be as pleasing and involving as tube sound. The aural distinctions between the two technologies have been fading over the years as parts quality and design experience has advanced, but each type of amplifying device has been easy to identify with a short audition. No longer. This is a ground-breaking design.

There is very little I can tell you about the 300 Watt, 63 pound, $19,800 per pair Jones Audio amplifiers that would not sound like a press release or something you would read in a glossy brochure. The Jones Audio amplifiers were auditioned in a system that included YG Acoustics Kipod Main Modules and Dali Euphonia RS-3 stand mounted loudspeakers, Dali Mentor 5 speakers, Velodyne Optimum-12 subwoofers, various preamplifiers, Prism Orpheus Digital Interface, SOTA Cosmos IV turntable with TriPlanar VIIu2 tonearm and Miyajima Shilabe phono cartridge. Interconnects are all Mogami and speaker cables are Audience Au24 e and Element Apollo. Power products include Audience PowerChord e, PS Audio AC-12 and Juice Bar II, Jerry’s DIY power cords, and an Audience ar2pT power conditioner.

There is nothing in the presentation of the Jones Audio amplifiers that grabs your attention on first listen. This is a very good thing, in fact, because anything that stands out as especially noteworthy is often a characteristic that will become tiresome and annoying over time. Of course, this assumes that the comparison components, with which you have become familiar, are not so inferior that even a small improvement would indeed stand out. However, one thing that I noticed very soon after the installation is that the PA-M300s create a very believable and HUGE sound stage and recording space. This is especially noticeable on good orchestral recordings, but even studio mixes benefit from the Jones Audio amplifiers’ exceptional recreation of space.

This requires outstanding low level resolution, and the Jones Audio amplifiers are excellent reproducers of the smallest details. The tambourine in Bruce Springsteen’s “One Step Up” from the Tunnel of Love LP, Columbia OC40999, is very realistically presented and the best I have ever heard from this recording. A tambourine is an amazingly complex and interesting instrument, combining leading edge impact as the head is struck, the sound of the head vibrating for a millisecond, and then the extremely complex sound of the many small cymbals resonating individually and together. The Jones Audio amplifiers offer this instrument in full measure. Given this performance, it is a simple matter to offer a similar level of quality to acoustic strings, any horn or brass instrument, and percussion.

Paul Simon’s “Graceland”, on Graceland 180 gram WB UK:WX52, 7599-25477-1, was warm and rich, but realistically crisp on consonants. I had the sensation of listening to the direct feed from Simon’s microphone instead of to a recording. The vocals were completely free from any electronic haze or edge. On “Homeless”, there was an almost spooky feeling that the singers were actually in my room and my eyes popped open to make sure I was still alone. This is better sound from this well known record that I have ever heard.

The bass is nimble and refined, offering notes cleanly and without hangover. The low bass power is perfectly in proportion to the upper bass. This relationship is required to offer the detail in the lower bass without boom or a sense of slowness. Likewise, the midrange has the richness and speed to offer both male and female vocals with believable presence. Often – too often in fact – amplifiers favor the lower midrange and sound better with male vocals, or they accentuate the upper midrange and force female vocalists to take center stage. A good test of this is listening to Mark Knopfler and EmmyLou Harris on All The Roadrunning, Mercury CD 9877385. Where some amplifiers can make it seem that these two seasoned professionals are competing for top billing, the Jones Audio amplifiers offer compelling duets from artists who are sharing their love of music.

The upper frequencies are revolutionary. There is no glare or harshness, and it is almost – almost – as if there is a “nice filter” that minimizes this often-abrasive character from poor or older recordings. However, these nasty artifacts are still present, but the Jones Audio amplifiers hold on to clean, undistorted sounds longer before giving in to the recordings’ inherent defects. Recordings can sound harsh, but never is this unwarranted: poor recordings sound thus and the Jones Audio amplifiers pass along both glory and sin. There are no omissions in low level resolution that would account for this clean and pure sound; the micro-resolution is superb. The PA-M300 amplifiers set a new standard for presenting very low level sound clearly.

This is probably a result of the excellent signal-to-noise ratio of -124dB. I found it enjoyable to listen for long periods at higher than usual volume levels without fatigue, headaches, random eye twitching or other unwanted physical reactions. In fact, most listening sessions were terminated by external factors, such as my life. The music was always extremely interesting, involving and enjoyable, with a strong desire to keep on listening into the wee hours.

I found that I also enjoyed listening at lower volumes than usual. This was partly due to the excellent upper bass and lower midrange (80-200Hz), which makes music sound realistically full and richly saturated. Playing the music loud was not required for a realistic tonal balance. However, there is nothing objectionable happening at high volume levels, which are lots of fun with 300 Watts per channel available at the turn of a knob.

I kept waiting for the initial charm of these intensely musical amplifiers to wear thin and for some small sonic anomaly to make its presence known. This usually happens in one to three listening sessions, but the Jones Audio amplifiers remained unfailingly musical and enjoyable. This had an unexpected but very welcome effect on me. After every listening session, especially longer ones lasting several hours, I felt energized, aware, calm and refreshed. This is the polar opposite of “listening fatigue”. The caveat is that you will want to listen longer and may be late for work in the morning, miss dates, forget to eat, or other repercussions of becoming a newly obsessed and devoted music listener.

The Jones Audio amplifiers are something of a revelation on another level, too. With other amplifiers, in the back of my mind was always the awareness that I was listening to hardware, a machine. Even though it took several weeks to become aware of it, it was startling to realize that this awareness was gone. The connection to the music was much more direct. This is supported by a sonic presentation that is supremely neutral across the octaves, and also supremely capable in extracting every artistic value from all of my recordings. 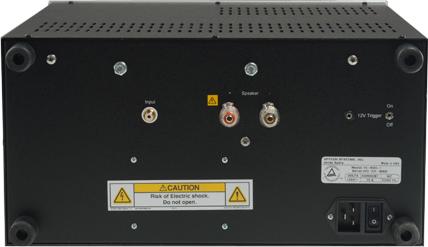 The amplifiers have RCA inputs only, and there are a pair of external balanced XLR-to-RCA converters in separate enclosures. The differences when using the RCA input from my preamplifier or a balanced connection through the converters are interesting. Through the XLR-RCA converters, the sound is a bit more dynamic and focused, somewhat like a tube amp operating in ultralinear mode instead of triode. It is punchier and a bit less sweet and rich. The RCA input sounds richer and smoother, but with a bit less leading edge macro-dynamic power. The converter offers somewhat more of the 845 tube sound than the RCA input, which has a bit more of the 300B character, relatively speaking. Of course, these differences are completely attributable to the sonic contributions from the XLR-to-RCA converters. Even though the converters are very good at their job, my long term preference was to connect my preamplifier directly to the amplifiers’ RCA inputs, even though that connection uses 5 meters of cable in my system. I used the factory supplied power cords exclusively during the preview period and I was a bit concerned early on about current draw because the amplifiers have 20A IEC connectors. However, together they draw only 3.5-4 Amps at normal to high sound levels. A standard 15 Amp electrical circuit should have no problems. At that power consumption, the heat output causes the the amplifiers to become warm but not uncomfortable to the touch.

The Jones Audio amplifiers never try to be good amplifiers by doing something particularly well. Instead, they do everything exceedingly well and thereby become great amplifiers. The reason why there are no negatives included in this review is that the amplifiers sounded better over time, and completely won my respect and my heart. They set a new standard in today’s marketplace. Another amplifier may sound fine, but it is appropriate to say, “It’s not a Jones”.

I was fortunate to have the Jones Audio PA-M300 amplifiers in my audio system. I listened to more music, on more occasions, and for longer periods. After each listening session, I felt refreshed and energized. The Jones Audio amplifiers offer a very special combination of natural resolution and even tonal balance with an absolutely non-electronic quality that is a revelation. They offer a natural presentation that is compelling, and then completely disappear from one’s awareness. I miss them.