1. A planar loudspeaker can present an incredibly realistic soundstage that is almost completely unknown using cone-type speakers. The 10.1 was chosen because it is a 2-way design, so there is only one crossover point which is above the critical frequencies of the midrange. Where the Fostex S-168 is very good in all other areas, its horizontal soundstage is like an sideways oval, with the small ends located at the speaker drivers: narrow on the sides, and tall in the middle. 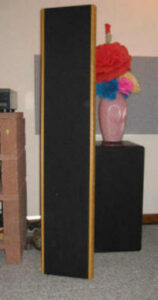 2. The 10-50 watts I had been using for years was not going to be sufficient to make these speakers sing. Ladies and Gentlemen, please welcome the Balanced Audio Technology 300x-SE integrated amplifier. Does this amplifier sound good? For the first time, I could clearly hear the words in “Rock Steady” on Sting’s LP …Nothing Like the Sun. Even better results were later obtained with Quicksilver V4s and Conrad Johnson Premier 350 amplifiers.

3. There is a layer of haze or grain present in the sound that makes these speakers distinctly inferior to the crystal clear presentation of the Fostex full-rangers.

So, after only a week, it was time to address number 3. (No one has ever accused me of tolerance when it comes to audio equipment.) The stock crossover includes one 1.8 mh iron core inductor, and one 12 mf Solen cap. Both were given pink-slips. The new hires were Alpha-Core air-core coils and SoniCaps film capacitors. The 14 gauge Alpha-Core coils perfectly matched the 0.3 ohm DCR of the stock inductors. The wire was also replaced with 14 gauge wire from Sonic Craft. Jeff at Sonic Craft was very helpful in choosing the wire and the caps that would work best with these speakers. I also learned a few things about capacitors from him in the process.

Replacement was simple, except for the contortions required to push the new connectors onto the driver terminals. There is a suggested break-in period of about 100 hours. Fasten your seatbelts.

After 1 hour, I felt the differences with the new crossovers were nothing less than HUGE. Gone was the haze in number 3. After about 5 hours, that phasey quality of capacitors that need breaking-in became very noticeable and worsened over the next 5 hours. This period lasted until the crossovers had about 40 hours, when break in was about 95% complete. The sound lost an additional edge and the soundstage became more focused over the next 50-60 hours. After about 100 hours, the sound became very smooth and easy to listen to for long periods. I expected the sharpness of new crossover parts to vanish, and this was what happened. Now the sound was just a bit lacking in high frequency resolution.

Time to experiment. I recalled one version of the Magnepan schematic showed a 0.1mf capacitor in parallel with the 12mf cap. I happened to have a pair of 0.1mf AudioCap Thetas on hand, so out came the soldering iron and in went the caps.

My initial impression was that the Maggies got that airy quality that I’ve heard the 3.6s deliver with the ribbon tweeter. With the 0.1mf caps in place, there seemed to be an increase in the high frequency resolution of the 10.1s. But sometimes we mistake one effect for another. On further listening, it was apparent that the highs had taken on an unnatural edge that made even excellent recordings sound just a little harsh. Of course, I performed a cap-ectomy and removed the Thetas. The harshness vanished.

But there is good news. It took another 100 hours or so for the small amount of upper midrange and high frequency resolution that seemed to be missing to slowly reappear. While the 10.1s are not much of a threat to the extraordinary resolution offered by the ribbon tweeter, they are truly excellent performers with the upgraded crossover. Their ability to create a realistic, 3-D sound stage is simply amazing. If you consider their small size, and the use of subwoofers which many of you already have, then the 10.1 may just be the best Magnepan ever made for real-world listening rooms.

Installation note: The built-in base tilts the speaker back a few degrees. The realism of the sound stage is improved noticeably if the speakers are vertical. Just place something (pencils work well) under the rear of the base and all is well. Other worthwhile modifications include bypassing both the fuse and the external tweeter attenuator jumper connectors.

UPDATE April, 2005. One year later. After living with these speakers, through numerous equipment changes including other speakers, amplifiers, preamplifiers, CD players, cables, cartridges, tonearms, and power products, I am convinced that although the modified Magnepans are not quite the best speakers you can buy, they are quite good enough (when used with good subwoofers), and reference quality.

Good enough? Let me explain. These speakers are so enjoyable, so complete sounding, so convincing, that the small lack of ultimate resolution in the upper mids and treble that you get with the true ribbon speakers can be ignored. How can a critical listener ignore this? When you buy a new component, it usually needs some break-in time to sound its best. There is also a period of time during which you get used to the sound of the new component. Your brain acclimates to the change from the old component, in the same way that you adjust to the sound of a symphony when sitting near the stage or up high in the balconies. In both cases, the sound is real (of course), but different. Also, the simple crossover minimizes phase shift and other problems that are present in more complex crossovers. While these small speakers don’t push the envelope of the highest resolution possible, nothing is really missing and your auditory system compensates naturally. After a few hours, you hear everything easily.

No speaker is perfect, and the positive characteristics of this speaker greatly outweigh this minor imperfection. A holographic soundstage, fully formed 3-D singers, and precise images are common. Add in the complete lack of grain or harshness, the invisible and inaudible transition between drivers, and lack of the “box sound” (which you will easily recognize after spending some time with a panel speaker), and this model’s small size, and you have a winner.