The Eigentakt amplifier module is rated at 425 Watts @ 1% THD into 4 Ohms, with a dynamic range of 131 dB(A) and THD of 0.00017% (-116dB) @ 100 Watts. It can be challenging to compare these dynamic range and distortion numbers to other technologies because the published specs for each are often at different operating conditions. We can say that these very impressive numbers make some 5-figure Class A or AB amplifiers seem like toys. An exception is the reference 4-figure Class AB Benchmark AHB2 amplifier: 132 dB dynamic range and a THD of 0.0001% at full power. NAD rates the $1,999 C298 as having an excellent signal to noise ratio of >120 dB(A) and 0.005% THD at 185 W into 8 Ohms.

Specifications alone do not tell us how an audio component might sound. The C298 was auditioned in a system consisting of Magico S1 Mk2 speakers lightly augmented in the bass by a pair of JL Audio e110 subwoofers, Dynaudio Evoke 30 and Elac Vela speakers borrowed from the HT system, Benchmark HPA4 and Soulution 325 preamps, BMC MCCI ULN phono preamp, Clearaudio Ovation turntable with Origin Live Agile tonearm and ZYX UNIverse Optimum cartridge. For digital, a Marantz SA-10 is used as a DAC with a custom Windows 10 music computer running JRiver Media Center, delivering my 32-bit 192 kHz LP recordings beautifully.

I would not put a lot of value in using these reviews to compare this amplifier with the NCore 1200-based Acoustic Imagery Atsah reviewed here because the associated components are completely different. The system in this review is much higher resolution than the one appearing in the Atsah review. The systems in the Mivera 1200AS, Wyred 4 Sound ST-750LE and PS Audio Stellar S300 amplifier reviews, all IcePower-based amplifiers, are all quite high resolution allowing meaningful comparisons to the NAD amplifier.

Like the career path for many of us, let’s start at the bottom and work our way up. The bass is rich and full and powerful. The bass also presents a very dynamic picture of the performance, with good leading-edge definition. The bass character is more of the “rolling thunder” presentation rather than tight and “fast”, often reducing the sense that individual bass strings are vibrating. The upper bass-lower midrange is excellent, gaining some definition and providing a solid foundation to midrange voices. The bass definition increases at higher power levels. On the Yello LP Stella, the bass on “Oh Yeah” is deep and powerful and quite impressive. Oh yeah!

The mid-upper treble is the audible region that highlights the character of the C298: low level detail, including harmonic fades and nuance, is largely absent. Even with the volume increased to compensate, it sounds as if the quietest 10% of the recording is ignored. There is good extension into the far upper treble, although with low resolution. This is surprising when we consider the state-of-the-art signal-to-noise ratio and extremely low level of total harmonic distortion. This corroborates the wisdom that measurements cannot tell us how a component actually sounds.

Low level resolution is just OK: ringing bells seem to have about half of their potential decay time, significantly limiting harmonic correctness. Acoustic piano can sound more like an electric instrument. The extreme resolution of the Magico diamond coated beryllium tweeter exposes some fairly wide-band low level grain, which is not present in the IcePower-based NAD RMB-1565 multi-channel amplifier in my home theater system, nor was this grain even minimally observed in the previous review of the $1,499 PS Audio Stellar S300. This grain or noise does not have not the usual solid-state fingerprint, but is a more uncorrelated anomaly.

The soundstage is good, presenting focused performers and pinpoint vocals. Each singer can be “spotted” in the sound field as a point source. Probably due to the reduction in low level resolution, singers mostly lack body and 3-dimensionality which makes them somewhat short of wholeness. The lateral stage is very good, but the depth of the stage is only fair. The sound staging prowess of any component is very dependent on low level resolution. The NAD is more of a “just the facts” component, rather than an audio microscope presenting the smallest detail.

The C298 has a correct overall tonal balance, with little spotlighting or emphasis in any small frequency area. The amplifier shares a trait with some other Class D products in that the sound never becomes confused or indistinct, no matter the music’s complexity, at any power level short of clipping. This is true at any observed system volume and helps the listener to feel comfortable turning it up to raise the limits to well beyond safe listening levels. Harmful sound is defined as long-term exposure to sound pressure levels greater than 85 dB. 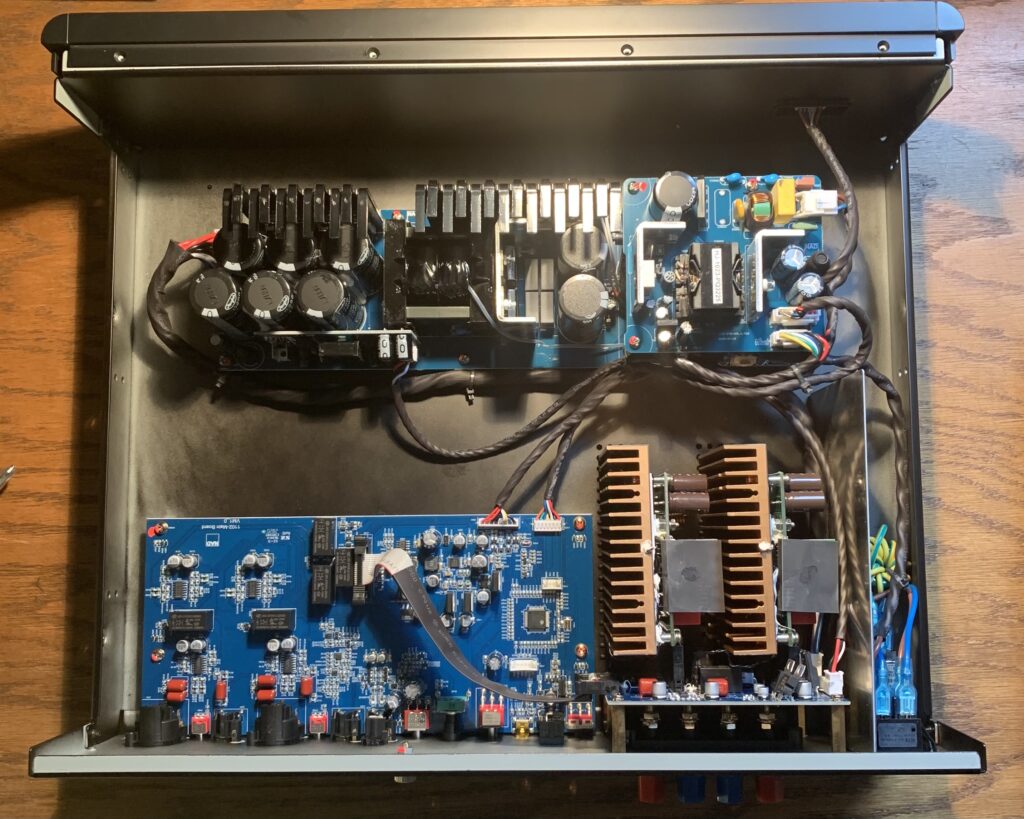 Imagine this: In addition to a volume control, your system has an “Immersion Control” which adjusts how involved and immersed in the music you can be. At a setting of “0”, the sound is thin, artificial and totally uninteresting. This is like a low-quality MP3 recording. At the opposite end of the Immersion Control, at a setting of “10”, you are completely captivated, involved, and thoroughly satisfied with the sound coming out of the speakers. The C298 delivers an equivalent Immersion Control setting of “6”.

The NAD amplifier was much more satisfying when the exquisite Magico speakers were replaced with the more relaxed and suitable Dynaudio Evoke 30 speakers. The $3,500 per pair Dynaudios, which are a more likely pairing than the $16,000 Magico speakers, presented seemingly more complete performances without so severely highlighting the character of the amplifier. Our Immersion Control increased to ‘7’ with the Evoke 30 speakers due to their relative warmth and more compatible abilities. The Benchmark AHB2 amplifier, for about $1,000 more, but weighing 8.7 pounds less, quickly demonstrated its easy superiority with both pairs of speakers.

The C298 was completely reliable during the audition and ran only a little above room temperature. The variable gain control was bypassed with the “FIX/VAR” switch set the FIX. The balanced XLR inputs were slightly preferred over the RCA inputs with my 5-meter connections to the preamplifiers.

The apparent character of the NAD C298 suggests that system matching – and an audition – are highly recommended. This Eigentakt-based amplifier could be an excellent partner in home theater systems where dynamics and vocal understandability are key requirements, and in symbiotic audio systems. Mix, match, and enjoy.