The Valhalla review follows the Valkyrja review. Please see below for Valhalla.

Let’s talk about system upgrades. Few people can afford to buy their dream system all at one time, so we upgrade components. With each upgrade, the goal is to improve the overall sound of the system. Often times, a component that we would consider to be of very high quality and one that would not be planned for further upgrades is shown to be inferior by an upgrade or improvement elsewhere in the system. This component may be replaced more than once in the effort to achieve the ideal system. Occasionally, we are able to acquire the ultimate component, maybe a preamp or turntable, which because of its exceptionally high performance becomes a long-term resident. 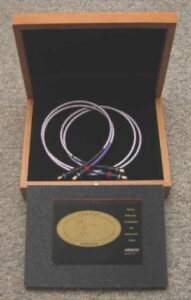 As we upgrade components, weak links in our systems are revealed more clearly. But the overall level of performance continues to improve as problems are addressed and veiled components replaced. It is rare that adding a better sounding component, if system synergy is accounted for, will result in a decrease in the overall system performance.

The Nordost Valkyrja interconnect is an example of that rare condition where adding something better can result in the system sounding worse. This is because of one major characteristic of the Valkyrja cables: they are so neutral and revealing that they do not play the synergy game and compensate or offset the sound of another component. As Popeye says, “I am what I am”. The cables simply are what they are and do what they do, and if the partnering components in the signal chain can’t handle being in their company, too bad.

Do not use Valkyrja cables with low or mid-fi electronics, expecting the cables to elevate and improve your system. The cable will reveal each and every weak link in your audio chain, and can sound rough and thin, fat and bloated, 2-dimensional and obscure, or whatever. You will make the mistake of blaming the cable for not elevating and improving the performance of your system, when in fact, the Valkyrja is simply making it obvious that there are “opportunities for improvement” (problems) elsewhere.

Upon installation, the most apparent characteristic is less high frequency presence, although after a short time listening, one realizes that the music is more relaxed, less glaring and hard. Often, we choose to listen at lower loudness levels than we might prefer to because something in the system sounds like it is reaching its limits. Maybe the speakers are reaching their peak excursion, or the amplifier is just starting to clip and is exhibiting increased distortion. Or, we have simply reached OUR limit of the amount of crap we can tolerate. Valkyrja cables will allow many systems to be played louder because their contribution to the sound is very, very low, and allow the system to sound much cleaner with less distortion than before.

One preamplifier I used during the review period was the excellent BAT VK-31SE preamplifier. It has the very reviewer-friendly ability to switch inputs from the remote control. So, I connected a Y connector to the output of either the Conrad Johnson Premier 15 Series 2 phono preamplifier or the very musical but rare Conrad Johnson DV-2b CD player. Then I connected the Valkyrja to one side of the Y and comparison cables to the other side, using different inputs on the BAT preamp. Instant level-matched A-B comparisons were now possible with just a push of a button on the BAT’s remote. Comparison cables included PS Audio xStream Plus and Statement, Tara RSC Air 1, Window Cable, van den Hul The First, and my old standby, Mogami 2534. Of course, longer term listening without the variable of the Y connector was performed with each cable in various locations of the system: phono stage to preamp, CD player to preamp, and preamp to amplifier(s).

At first, I did not care for the sound of the Valkyrja, feeling they rolled off the highs and removed a noticeable amount of the sparkle and sense of air we like. As the weeks rolled by, I kept returning to the Nordost cables and slowly began to appreciate them. After some more time had elapsed, I found that the Valkyrjas seemed to be installed all the time, and the other cables had switched places and now lived in their boxes, disconnected from the system.

Observation: Sometimes I install a component and something in the sound immediately captures my attention and I say “wow” or “that’s great”. That, contrary to the observation, is usually a problem. Anything in the sound that sticks out and grabs your attention and is so obvious will invariably be one of the very things you later dislike about a component. “Great treble” becomes “too bright”. “Powerful bass” turns into “fat and boomy”. Or something. The point is that as components improve and systems become more satisfying, no one factor is obviously exceptional. The high frequency performance is great because the midrange performance is equally outstanding because the bass is good, too. One sound, even, detailed, realistic, enjoyable. The entire presentation, bass to treble, must be at one performance level or long-term satisfaction suffers. Here’s a corollary: The longer a component takes to sound great, the better it really is, and the more you will enjoy it for a longer time. We’re talking hours or possibly even days before a great component shows it true glory.

Valkyrja cables fit this description. There is nothing in the performance that draws attention, as the Tara RSC Air 1’s upper midrange fairly screams “look at me, see how smooth I am!” Relative to all of these cables except the PS Audio xStream Statement which is cotton-soft across the board, the Nordost shows less brightness or forwardness. This may make it sound less detailed or airy upon first listen, but give it time. Nothing is missing. On the contrary, because the midrange and treble are presented in good relative balance, instruments and voices seem more realistic and present than with many other cables. Instruments with a lot of high frequency content, such as triangles, bells, and cymbals, are further back on the stage where they belong. This is in contrast to many cables that separate the instrument into two parts: the fundamental tone, usually in the middle or rear of the sound stage, and the higher frequency harmonics, which mysteriously tend to wander towards the foreground and clump at the speakers. The Valkyrjas maintain the proper image placement and cohesiveness better than any other cable in my experience. Although no one area of performance stands out from another, the Valkyrja’s most apparent strength is its truly exceptional sound stage accuracy.

The cables that came closest using both the A-B and long-term comparisons were, surprisingly, Mogami 2534. The Mogamis have a bit more upper midrange/low treble presence which is closer to what many other cables offer. Just a bit, though. However, it took about 30 minutes of focused, analytical, A-B comparisons between the Mogami and Nordost cables, which sometimes required replaying just a couple of notes or vocal inflections several times, to consistently identify where and in what quantity the differences existed.

These cables are expensive: $2000 per meter pair. Comparisons to the twice as dear Valhalla cables from Nordost are planned and a follow up will be included here soon. Until then (and possibly after), Valkyrja cables are one of the best I have had the pleasure to use in my audio system and are worth their seemingly outrageous price. I recommend these cables for high performance audio systems where the goal is high resolution and neutrality, not audiophile fireworks. After adjusting to the new cables, you might find yourself more relaxed and refreshed after a listening session than with your old cables. To me, a good listening session is a mini-vacation. Nordost Valkyrja cables consistently provided on-time departures.

I’ll be brief. The systems in which Valhalla will be suitable and synergistic will be different, probably less linear, than those systems in which Valkyrja will find a happy home. If one picture is worth a thousand words, let’s use this made-up chart as a discussion point.

First, the individual plots for each cable are separated only to show their differences. Valhalla is not louder than Valkyrja.

Second, this is the cables’ apparent, subjective response in my environment with the associated gear on hand. This is not the measured performance of either cable. Relative points on the graph may be exaggerated to show differences.

Valkyrja seems to have a gently downward sloping response, where everything above the bass and lower midrange seems to slowly become less prominent than lower frequencies. This focuses the attention on the lower midrange. The result is that it takes some time to mentally adjust to the unique sonic footprint of Valkyrja. After this adjustment is made, Valkyrja sounds as described above.

Valhalla is immediately noticeable as having more energy in the lower-to-mid midrange than Valkyrja, but with a faster apparent fall off of sounds higher in frequency. I tried every combination of gear available, but could not get Valhalla to sound “right”, either when offering the upper harmonic content from sounds lower in frequency, or from instruments with their fundamental sounds in the upper registers. Soprano voices sounded recessed and veiled, and cymbals and bells lost their sparkle and sheen. Where I could enjoy Valkyrja, Valhalla sounded muffled and subdued and I was always relieved to remove Valhalla from whatever components they were connected to: LP, CD, tuner, tube or solid state amp or preamp, the result was consistent. The spectral balance of Valhalla was different than any other cable either on-hand or in memory.

Valhalla consistently scored low on the Zen test due to it’s dark nature. Another way to view the performance of this cable is that if it sounds good in your system, almost no other cable will be suitable. To be positive, Valhalla showed the same excellent soundstage specificity as Valkyrja. I would not be at all surprised if in another system, one specifically optimized for the character of Valhalla, the performance could be quite special.