Origin Live has been making tonearms, turntables and accessories for over 25 years. Based in Southampton, UK, their products have earned nearly every possible award from a variety of print and online publications, including our ‘10 LP’ award for the Origin Live Conqueror tonearm. Mark Baker and crew have developed another superb product in the new Agile tonearm.

The 9.5-inch Agile tonearm includes as standard equipment the top-of-the-line Silver Hybrid 2-S cable, which is a £1,130 option, with DIN and either RCA or XLR connectors, for other tonearms in the line.  A 12-inch version of the Agile is also available as a £400 option. I have been watching the evolution of the Origin Live Enterprise tonearm for several years, seeing it evolve to its current Enterprise ‘MK4’ version. The £9,750 Agile is positioned in the product line between the £4,910 Enterprise and the “almost ready for prime time” £24,000 Renown. There were already a number of Enterprise reviews, so when the Agile was announced, it entered at the top of my wish list. Mark Baker was a pleasure to work with for this review.

Every detail of this tonearm is the result of many years of refinement and attention to detail by an experienced team dedicated to delivering the highest value analog playback equipment available today. One key design feature is the use of “Dual Pivot Bearings” for vertical arm movement. These are not ball bearings in any sense of the term, but “Ultra hard tungsten carbide points sitting in hardened and burnished steel cups”. Jeweled bearing points are avoided as they can shatter under unusual stress. The points are decoupled from the arm itself. Ultra-low friction ceramic bearings are used for horizontal arm movement. The VTA adjustment is accessible above the armboard on this model.

The Agile improves on the Enterprise with:

– More advanced stiffening techniques employed within the arm tube itself.

The Agile was auditioned on VPI Aries 3 (a challenging installation) and Clearaudio Ovation turntables. The installation on the Ovation was a simple matter of removing the Clearaudio Universal tonearm. Both tonearms require the same armboard hole-to-spindle distance of 222mm. The same armboard was used for both tonearms with no modification required. The Agile can also use any standard Rega armboard. The Origin Live website, link below, has an extensive collection of helpful information on choosing and mounting any of their tonearms. The right-angle DIN connector on the Silver Hybrid 2 cable worked well on the Ovation, but another brand’s much stiffer cable would not connect fully due to the small opening on the bottom of the table. 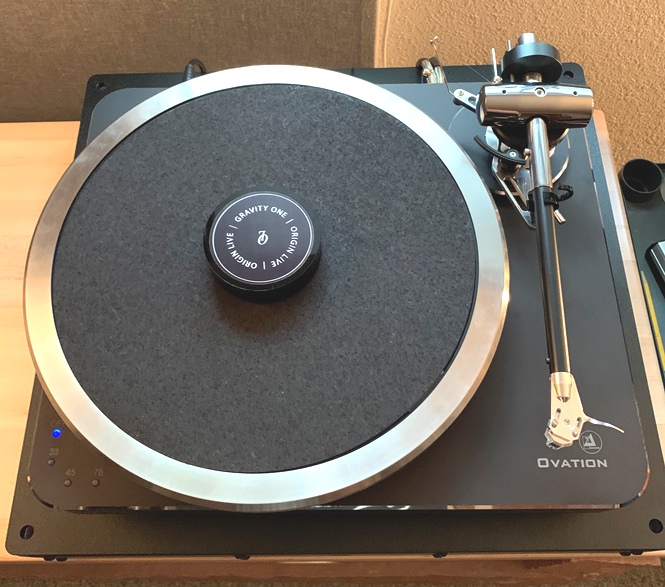 The first impression is similar to attending a live concert after listening to a stereo system for some time. The difference is unmistakable. The sound field is more than just a sound stage. With the Agile in play, the image expands to include the entire acoustic of the hall, offering a fully energized environment controlled by the music. The 3D effect is very informative of the original recording space. Each instrument is allowed to blossom and develop in its own location in a very well-developed 3-dimensional acoustic space.

A large and detailed sound field requires exceptional low-level resolution to allow extremely subtle phase and timing information to pass from a vinyl LP to your ears. The ZYX UNIverse Optimum cartridge, $17,995, with 1 Ohm DCR and an output of 0.15 mV, has insanely good resolution. In visual terms, think of the 4K TVs which are common today. With the ZYX cartridge and Origin Live tonearm combination, the visual equivalent would be a 16K television, with 3D. The presentation offers more than just glimpses of virtual reality. The Origin Live Agile tonearm characteristically communicates penetratingly complete delivery of all information on the LP record.

Hear the 1972 LP Gypsy Cowboy from New Riders of the Purple Sage. Many of the themes on this record are artfully arranged, while others not so much, but the quality of the recording is less than one would hear from an Original Master Recording from MFSL. Playing this LP with the Agile tonearm elevates this recording to Original Master Recording quality. This old studio recording is nicely transparent with excellent separation of instruments and voices presented with previously unknown and unheard levels of fine resolution and nuance. Actual MFSL pressings deliver stunning musical performances.

The ebb and flow of “Third World Man” on Steely Dan’s Gaucho record is presented with both subtlety and full dynamic power. Very enjoyable! On The Nylons LP Happy Together, the Agile tonearm helps to present four distinct and separate voices. This is a first! Listen to “Chain Gang” and forget your cares and worries, or a smart phone alert.

Ringing bells gain an ethereal quality and float in space with exceptional dimensionality and presence due to seemingly complete resolution in the upper frequencies. Well recorded cymbals never sound like white noise. At the other end of the musical scale, every bass note is perfectly clear and distinct on “Sister Moon” from Sting’s Nothing Like the Sun double LP. The bass is very deep, detailed and resonant. 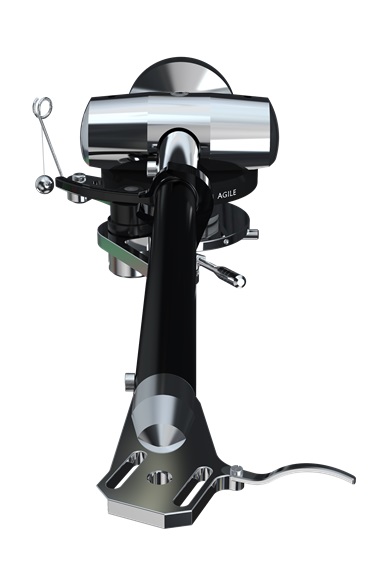 The dynamic performance is outstanding. You feel every drum hit, cymbal tap and other percussive sound. These instantaneous sounds are not muffled or rounded off which is similar to this character of the Kuzma tonearm. Both arms excel at delivering correct leading edges and impact. They are fast and articulate. Maybe it is because they use roughly similar bearing technology. The dynamics are so fast and powerful that I found myself watching the clipping indicators on the Benchmark power amp. (They never lit.) The Agile combines the speed and dynamics of the Kuzma with the relative richness and warmth of the Tri-Planar and the perfect linearity and resolution of a MØRCH DP-8, then takes the entire presentation to a higher level.

We like to talk about the silence between notes. The Agile arm “does” silence very well, indeed. However, the awesome completeness of every note, showcasing extremely long harmonic trails fading naturally into utter oblivion, can “fill in” the space between notes with natural sounds that other tonearms omit. Silence between notes could suggest a lack of resolution. This is not an issue with the Agile, which presents a rich tapestry of sonic depth which energizes the listening room with the fully developed sound of instruments and voices.

Weed, AKA marijuana, reportedly makes one feel good. Acid (LSD), again reportedly, takes you to an entirely different plane of perception. The Agile tonearm is the Acid Queen of tonearms, facilitating a sea change in believability and enjoyment. OK, I am getting a little carried away in telling you about the wonderfully entertaining musical performances with this tonearm in play. But only a little.

A surprising take-away from this audition is that the Clearaudio Ovation turntable is capable of sounding better than its compact design might suggest. Fitted with the Agile tonearm, Clearaudio battery power supply, Outer Limit record clamp, and Origin Live Gravity One center weight and OL platter mat, this configuration has elevated the sound quality of the entire system. This also holds true with the Miyajima Destiny phono cartridge, discouraging thoughts of upgrading. I am not even sure what an upgrade might entail except that it would be enormously expensive.

I have used just about every superlative adjective in the Thesaurus to describe the performance of the Origin Live tonearm so it is time to wrap up this review with a few parting thoughts. Within 1 minute of lowering the Agile tonearm on a record it was obvious that the sonic bar had been raised, eclipsing by a noticeable margin anything this lifelong audiophile has heard before. This is a paradigm shift. From the precision of the cuing, to the ergonomically tapered finger lift, to the excellent finish of the entire tonearm, the Agile is a pleasure to own and use. It is a significant upgrade and a constant delight to hear. The Origin Live Agile tonearm is the next level.

This review would not have been possible without the very kind support of Mark Baker at Origin Live. Thank you!