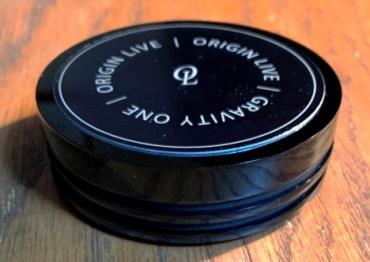 Several readers let me know that they appreciate the short format of the reviews offered here on 10 Audio. The word “pithy” has been noticed a few times in the feedback. Pithy means “concise and forcefully expressive” and “having substance and point” and “short and sweet”. This review definitely supports those definitions.

The new Origin Live Gravity One record clamp works differently than the usual “record clamp”. Almost every clamp available today is heavy to attempt to flatten the LP, damp vibrations of the record and platter, and couple the record to the turntable spindle. This is what a clamp should be and do, right? I believed this to be the undisputed truth of this worthwhile accessory. Now, after auditioning the Origin Live Gravity One record clamp, I am happy to report that this old dog has learned a new trick. 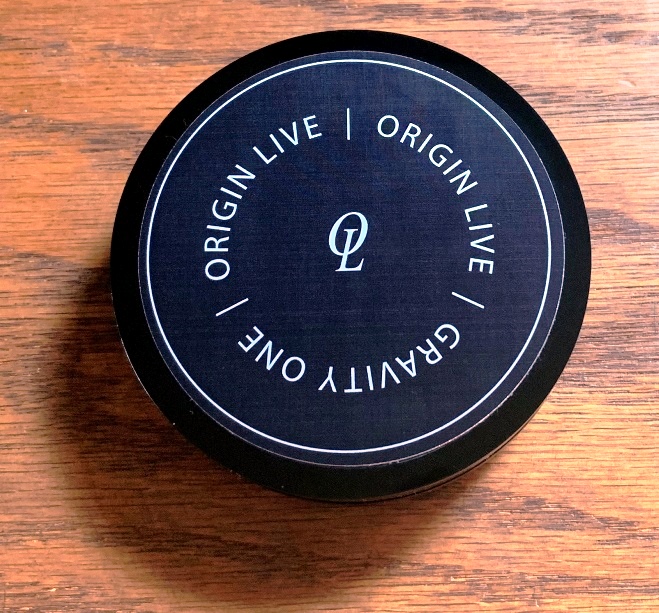 The Gravity One record clamp is fundamentally different from other clamps. First, it does not “clamp” to the record spindle. Instead, it gently rests on the record label, mostly isolating the record from whatever noise and vibration is present in the main turntable platter bearing. And second, the weight of the weight is only 2.3 ounces (67 grams). Compare this to the new Clearaudio Innovation clamp at 1 pound 11.5 ounces or the popular Stillpoints LPI at 1 pound 7.5 ounces. The cost of the Gravity One clamp is £195 or about $250.

From the manufacturer’s Web page (link below):
“The Gravity One Record weight serves to remove harmful vibration from the record and thus significantly improve your sound quality.

“Most clamps flatten records successfully but have very mixed results on sound quality. As a generalization, most tend to enhance create pump up the bass whilst dulling down the upper mid-band. There is also a perceived softening of dynamics (even in the bass), a slowing down of the sound and the decay of notes suffers.”

With the Gravity One, vocals are pulled out of and separated from the mix, presented as entirely separate sounds, not blending with or part of other sounds. When multiple singers are in the recording, there is a greatly enhanced ability to hear each singer distinctly. The sound stage depth increases noticeably, giving each singer a much better-defined 3D image.

The entire treble range seems to relax and gain a sense of openness and ease. This is marked by greater resolution and very fine detail, especially as notes have a very long fade into silence. The feeling of air and openness lends a more natural, less processed perception to all sounds in the midrange and upper frequencies.

Nuance and emotion, which rely on very subtle and fine resolution, are also presented much more noticeably. It really takes only a few minutes to hear this positive change which significantly enhances one’s enjoyment of the performance. Where changing between the two other clamps on hand resulted in “a little more of this, a little less of that” type of comparison, installing the Origin Live Gravity One was a paradigm shift in the level of improvement in the listening experience. This upgrade could be roughly compared to doubling, or more, the cost of any component in your stereo system. 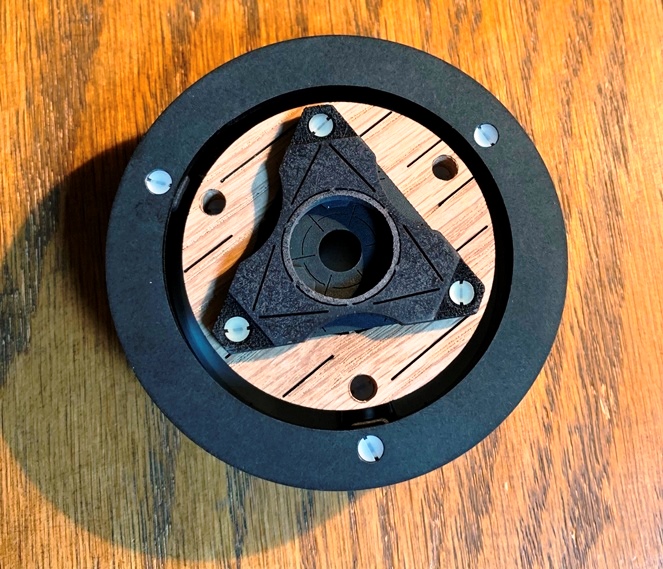 On the Alicia Keys LP The Diary of Alicia Keys, her voice is startlingly present and resolved. This 2 LP album offers a studio mix with prominent bass that is well recorded and tuneful. The heavy record clamps offer just a bit more detail in the lowest bass, while the Gravity One offers outstanding definition and micro-dynamics in the mid-upper bass. Bass power and macro-dynamics felt similar for the three clamps listed here.

Too many of my LPs acquired over the past 50 years seemed to have a similar sonic defect, varying in degree. There is an edge or coarseness which is often apparent when listening to vocals. This is similar to the sound of a new phono cartridge or electronic component. We should not confuse this distortion with early, 1980s digital sound, although the effect is generally similar. I am happy to report that this unwelcome effect is mostly not the result of defective recordings, and this is certain because using the Gravity One clamp eliminates this occasional harshness and greatly helps to deliver vocals in their correct, pristine condition. Some things you don’t notice until they are gone.

Using the Clearaudio Ovation turntable and Origin Live Agile tonearm with no clamp presents a relatively flat and confused sound stage. The definition of the image is much better when the Stillpoints LPI clamp is used, and takes a giant leap upgrade with the Gravity One. On a scale of 1 to 10, with 1 being the sound with no clamp, the Clearaudio Innovation clamps earns a 4, the Stillpoints LPI gets a 5, and the Gravity One is awarded a 10. This is a game changer to the category of record clamp.

While listening to digital, which is provided by a custom Windows music computer connected via USB to a Marantz SA-10 used as a DAC, the Gravity One sat idle and lonely. So I placed the Gravity One on top of the Marantz and also on top of the Benchmark HPA4 or Soulution 325 preamps. The improvements with this “record clamp” sitting atop electronics was noticable as an increase in harmonic density (richness), longer fade-outs, and better delineation of individual performers. The differences with the Marantz and Soulution components were small but present, with a larger positive effect with the Benchmark preamp. It seems the Gravity One will be in use whether listening to LPs or to digital music!

Yes, this is one of the pithiest reviews to appear on 10 Audio in many years. It doesn’t take a lot of words to tell you that with the Origin Live Gravity One record clamp in use, this listener was finally convinced that a living, breathing human presence was being attempted in my music room. Origin Live offers a money back guarantee and I can do no more than to strongly recommend an audition at your earliest opportunity.

This review would not have been possible without the very kind support of Mark Baker at Origin Live. Thank you!