When I reviewed the Koetsu line from the Black up to the Rosewood Signature Platinum, I started at the bottom and worked up, sharing the improvements with each higher model. So just to be different, let’s start with the top-of-the-line Jubilee ($1900) and then discuss what you give up or lose as we move down the line to the Kontrapunkt B ($1150) and then finish this mini-survey with the Kontrapunkt A ($750).

All three cartridges share the same stainless steel and aluminum body design and all are low output moving coils. You will need a quiet phono preamplifier with plenty of gain to use any of these cartridges. 55-60 dB of gain should do nicely, although of course, this depends on the preamplifier, amplifier and your speakers’ efficiency. All three were very comfortable at loadings of 100 ohms with their 5-6 ohm DCR coils. The major differentiating features of the Jubilee are its boron cantilever and .34mV output. The Kontrapunkt B has a cantilever made from ruby with a .47mV output, while the Kontrapunkt A has an aluminum cantilever and a .45mV output. All three cartridges have coils wired with 6-nines silver wire. Complete specs are available here.

The cartridges were all given about 100 hours of break-in time before auditioning on a Kuzma Stabi Reference turntable with a Graham Phantom tonearm. I have a spare arm wand for the Phantom and it took about 2 minutes total to swap cartridges and adjust the VTF. The phono preamplifier was the outstanding Conrad Johnson Premier 15 with internal Jensen step-up transformers. Even though this phono stage will soon join other classic C-J models, it is truly and unfailingly musical.

Enough foreplay. How do they sound? The Jubilee is a fine cartridge. It has almost all of the detail of the Zyx Airy 3x-SB, but without the latter’s relatively forward character. The bass is a bit more powerful and dynamic than the Shelter 90x or the Zyx, and bass lines are very easy to follow. The bass is more resonant and rich, and also tighter with a small bit better leading edge definition than either of these more expensive cartridges. 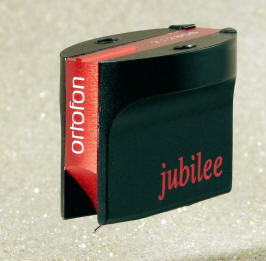 The Jubilee presents a very realistic midrange, and all voices have a distinct human character that never sounds processed or stripped of emotion. Soundstages are realistically wide and very deep and are very precise, although the lateral stage rarely extends to the left of the left speaker or to the right of the right speaker. Soundstage width at the far corners of the stage has a bit less clarity than some more expensive cartridges, for example, the $5500 Koetsu Rosewood Signature Platinum.

Where it really excels is the way it keeps complex music clear and distinct, always letting me hear whatever instrument I want to, or just relax into the whole presentation. It is actually a special (and fun) experience to actually turn my head towards one instrument or another and easily hear its contribution without it blending into an adjacent performer. This is very rare in cartridges at any price, and I want to emphasize that in this sonic feature, the Jubilee is absolutely world-class. As an example, in Danse Macabre, on Witches Brew, RCA Victor Red Seal LSC-2225, when the entire orchestra is building up to the explosive climax, it is a simple matter to look right and hear the individual horns contributing to the growing excitement or to the left and see how each section of strings have different roles while adding to the musical whole. And even when the sound almost literally explodes at the climax, the Jubilee remains calm and collected and tracks this huge avalanche of music without letting it become an indistinguishable mass of sound. Very impressive!

After listening to and thoroughly enjoying the Jubilee for several months (not weeks), I started to feel that I wanted a bit more crispness and speed in the midrange and air in the treble. A more immediate or exciting sound, if you will. But that is certainly more a reflection of my fickle sonic preferences and ever changing system than an indictment of the cartridge. It has a very even character that avoids spotlighting any particular frequency range. The Jubilee has many qualities of the best cartridges at a very attractive price. The relatively low price will discourage some potential buyers, especially those who feel that they need to spend more to obtain this level of musical enjoyment. 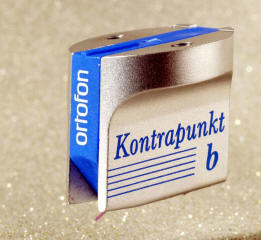 Moving on the Kontrapunkt B, the first thing that impresses is the gorgeous solid ruby cantilever. We have diamond styli, gold, silver, and platinum connectors, silver and gold wire, onyx and jade cartridge bodies, and now ruby cantilevers. Talk about audio jewelry! When the light hits that ruby rod just right, it looks like a laser beam is shining from the cartridge to the record. Very cool!

As we survey the bass, we see it is rounder and fuller sounding than the Jubilee, with less impact. The leading edge of bass notes is noticeably less precise. There is a good blend from the low bass to upper bass, and bass guitar has very good body across its range. 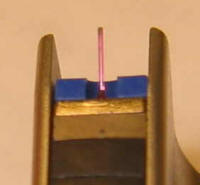 There is a distinct change in character from about middle C to the center of the next octave, a range from about 260 Hz to 600 Hz. In this range, the sound is thinner or dryer, with less harmonic bloom than is present with the Jubilee, or with the “B” at frequencies both higher and lower. This can be good for some vocals, and I enjoyed Mark Knopfler’s and Eric Clapton’s singing a bit more with the added crispness as presented by the “B”. This reminded me of the Shelter 901, which also exhibits a change in tonal quality in the midrange.

The treble is clean, crisp, and extended, but there is less shimmering decay than with the higher-resolution Jubilee. This makes it difficult to differentiate different cymbals, as they all sound almost alike. Bells and triangles have less of the 3-dimensionality of the Jubilee. This may be a benefit in some systems that need some focus for overly diffuse images. There is good delineation of massed voices, although all vocals have less chest or breath sound than is present with the Jubilee. This relates to low-level resolution in the upper midrange. There is an excellent impression of speed, and the clarity of a drum stick hitting the drum head is impressive. I noted “fast and agile”, and good focus. The Kontrapunkt B is not quite as good as the Jubilee at keeping complex music sorted out, but the family resemblance is present and the “B” can easily compete with much more expensive cartridges in this important regard.

Overall, the Kontrapunkt B is a good cartridge and somewhat of a bargain for its level of performance. This is provided its idiosyncratic tonal balance in the midrange is compatible with your system and musical tastes.

The Kontrapunkt A does not suffer from the tonal faults of its bigger brother. It has the even balance of the Jubilee. In fact, the “A” sounds like the Jubilee’s little brother and not an economized version of the Kontrapunkt B. Everything with the “A” is simply not as refined as the top of the line Jubilee. I guess that instead of referring to the Kontrapunkt A as the Jubilee’s little brother, you could call it the Jubilee’s grandpa: slower, looser, and lacking in the speed and agility that the Jubilee provides. The main point of departure from the high standard set by the Jubilee is the presence of a thin fog that overlays the sonic picture. This fog lifts to a large degree with over 100 hours of break-in, but does not entirely dissipate. This small translucent quality was not noticed with the Kontrapunkt B, but this listener felt that the fog was less harmful to the musical message than the tonal imbalance of the “B”. YMMV.

These three cartridges share a strong family sound, one that is very neutral and well extended, with deep, powerful bass and good to excellent imaging. The Kontrapunkt A is a good under-$1k cartridge that consistently presents a balanced and enjoyable performance. The “B” model is a clear (literally) step up, although more attention will be required in matching it to a compatible system; one that includes the sweetening influence of warm-in-the-midrange tubes would be ideal. The Jubilee is the real star of the trio and is a cartridge that can compete in several key areas with much more expensive models.

Overall Ratings:
Jubilee: 9 LPs
Kontrapunkt A and B: 7 LPs

Thanks to Jay Kaufman at Audio Revelation for his kind assistance.