The Paradigm Persona B is the smallest speaker in the new Persona product line. It is a stand mounted, 2-way speaker using beryllium for the dome of the tweeter and also for the cone of the mid-woofer driver. While this very light and strong material is being used by several manufacturers in their tweeters, Paradigm is the only one to apply a beryllium cone to a woofer.

The Persona B has a list price of $7000 for a pair, and the dedicated stands are $1200 per pair. The included aluminum brackets, which allow the speaker to sit level and upright, attach securely to the speakers and to the stands. If these brackets are not installed, the speaker will lean backwards at an unusable angle. The listed sensitivity of the Persona B is 92 dB in-room, and 89 dB anechoic. The on-axis frequency response is +/- 2dB from 60Hz – 45kHz, and each speaker weighs 31 pounds. The review pair were finished in Sonic Silver. They have a modern look with a tough, attractive finish.

The Persona B’s higher than average sensitivity allows it to be used with a wide variety of power amplifiers, some with outputs in the 10-15 Watts per channel range. There was a small sense of strain at higher loudness levels with the 10 Watt Inspire amplifier, but the other amplifiers listed above were able to drive the Personas to the usual 70-80 dB SPL or louder listening levels without signs of strain. The speakers were run for 200 hours to assure adequate break in.

There is good performance into the low bass with useable content in the 30-40 Hz range. This is excellent performance from a 7 inch woofer. The low-mid bass is a bit faster and better defined than that offered by the Focal Sopra 1, while being similar to the Fritzspeakers Carrera BE. Down low, the Persona B delivers. For about 90% of music, the Persona B has adequate bass on its own without any augmentation from subwoofers, and does a good job of pressurizing a not-large listening space.

The Persona B offers the deepest sound stage of any comparison speaker used during the review period. The width of the stage is similar to the Focals or Fritzspeakers, and image specificity is also similar to these models, which is very good.

The Focal Sopra 1 and Fritzspeakers Carrera BE, which also have beryllium tweeters, both offer a more refined treble range with less etch and more natural sibilance. These other models offer an improved ability to present upper frequency harmonics in correct proportion to their fundamental sounds. This is a linearity issue. Overall, the tweeter’s performance is slightly below that of the $3500 Fritzspeakers. 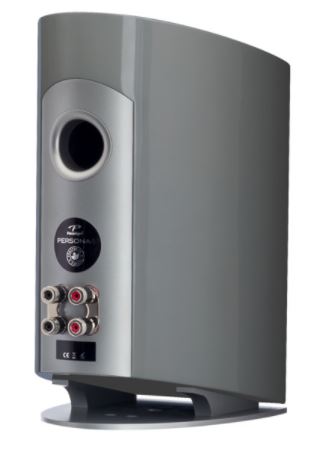 From the bass through the lower treble, before the tweeter takes over, we hear the cutting-edge sound of Paradigm’s beryllium cone mid-woofer, which is unique. From the lower midrange up to the crossover point of 2kHz, the sound quality is very amplifier sensitive and definitely favors amplifiers that are warmer with a character of softer, more laid-back sound. The linear and quite transparent First Watt J2 and Pass XA30.8 amplifiers are poor matches which result in unpleasant distortion in the upper midrange.

There is a pervasive brittle and coarse quality in the midrange and upper midrange that completely prevents these speakers from passing the Zen Test. Consistently, with a variety of amplifiers and digital or analog source material, to varying degrees the Persona B speakers were unpleasant to listen to. The hand-off from the mid-woofer to the tweeter is quite noticeable because the upper frequencies sound good. It is like kayaking down Class 5 rapids which end in a calm pool. Of the amplifiers on hand, the best sonic match is the warm and very rich Inspire FireBottle with 6L6 tubes (but not KT150s), distantly followed by the Nord One Up (Hypex NC500) since both amps are softer, less detailed in the mid frequencies. The Persona’s razor-sharp presentation is a good candidate for an offsetting character in a power amplifier.

A dichotomy of performance with different amplifiers happens with all good speakers, but here the Persona’s preference for warmer sounding amps is extreme. Creating a balanced sounding system with the Paradigm speakers could require major changes to cables and source components, and even room treatments to make the listening room less bright and more dead. Due to the strong character of the Persona Bs, if they sound correct with particular components, those components are probably not neutral. This disqualifies the Persona B from being included in the category of Reference Level. I think of this cutting-edge beryllium cone mid-woofer as a work in progress.

This review is shorter than most here on 10 Audio for a good reason. There was a strong desire to turn off the system and end the audition. I imagined listening in a stereo store where a sales person kindly asks, “Heard enough?”, and my reply is, “Yes”. In the product literature, Paradigm uses the word “untamed” which is an entirely appropriate summary of the sound of the Persona B.