Many turntables today include an electronic speed controller for the motor that drives the platter that makes the records go round and round. The purpose of these controllers is to make sure that the motor sees a very constant signal to maintain a very constant speed. The ear is more sensitive to variations in speed than to small inaccuracies in the exact frequency. A wavering, fluctuating frequency is more apparent than a frequency that is “off” a bit. For example, a recorded 1000 Hz tone should be reproduced at a very steady 1000 Hz, without flutter over a range of 995 Hz to 1005 Hz. Perfect rock-solid speed to produce a perfect 1000 Hz tone is also critical. Those with perfect pitch would hear deviations from this, but for the other 99% of the population, small variations in absolute pitch (frequency) can often go unnoticed. But a wavering or unsteady frequency is readily apparent. As we shall see, this problem is easily remediated. 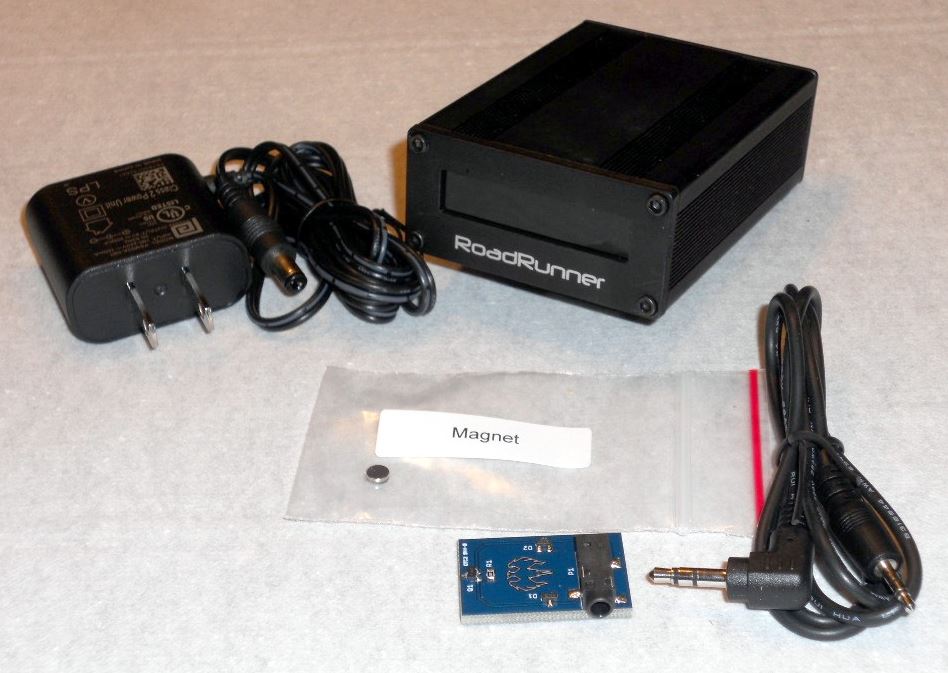 There are two parts to the Phoenix Engineering precision speed controller “system”. The RoadRunner tachometer ($234) shows you the exact speed of the turntable platter to 3 decimal places: 33.333 RPM. The Falcon ($379) or Eagle ($525) power supplies, which you choose based on the current draw of the turntable motor, actually powers the turntable motor. With the complete system, a small cable is connected between the RoadRunner and Eagle power supply controller to maintain the exact speed. Without the RoadRunner constantly “talking” to the Eagle or Falcon power supply, the power supply alone is similar in function to the VPI SDS speed controller ($1400). Both employ a precision internal frequency reference to maintain constant motor speed.

Where the VPI SDS has a PLL (phase locked loop) circuit to maintain a steady frequency, the Phoenix Engineering Eagle uses a DDS (direct digital synthesis) circuit. One advantage of DDS is its faster settling time. Both devices can be calibrated to within a few hundreths of 1 percent variance from perfect speed and stability. The result is key.

The Falcon power supply can run synchronous turntable motors that draw up to 5 Watts of power. The VPI Aries 3D turntable’s motor draws 14 Watts and requires the larger Eagle power supply, right on the edge of the Eagle’s rated limit of 15 Watts. The SDS can power a synchronous motor up to 20 Watts.

When I purchased the Aries 3D, Harry Weisfeld at VPI suggested that I try the VPI SDS speed controller, writing, “Your jaw will hit the floor when you hear the difference. The bass gets tighter, the upper midrange backs off, and the focus becomes much, much greater along with better low level resolution. Mechanical sounds you thought were part of analog disappear. It’s all about the exact motor speed and the power company guarantees 60 HZ as an average over 24 hours, the SDS locks it microsecond to microsecond. The difference is staggering.”

From the SDS owner’s manual: “The SDS provides the line voltage that all domestic turntable equipment requires. The difference between the SDS’s conditioned output and that provided by your local electric company is that the SDS gives you a highly stable, pure sine wave instead of the often “dirty” and unstable line frequency you get from your wall outlet. While there are other devices that filter spikes, surges, and R.F. noise, only the SDS provides a pure, double filtered, stable line frequency and voltage. The SDS is like a “Black Hole” for noise.”

After a couple of months to understand the sound of the Aries 3D, I connected the turntable to a VPI SDS. The improvement with the electronic speed control was not an instant, night and day-type of change, although a change for the better was noted. It was left in the system for a week or so without conciously attributing to the SDS how really good my system was sounding. But when I disconnected the SDS and plugged the turntable directly to the wall AC again, it was very apparent that the improvement delivered by the SDS was, indeed, staggering. An added layer of hash and grit appeared, the soundstage shrunk by about half, the purity of the midrange and treble decreased, and the feeling that a singer was performing in my room was reduced significantly. Harry was right!

Several weeks later at RMAF, I was talking with Bob Sattin, proprietor of Bob’s Devices and a dealer of both VPI and Phoenix Engineering products, about the Aries which I had purchased from him. I mentioned my experiences with the SDS and he suggested that I contact Bill Carlin at Phoenix Engineering to pursue this line of inquiry. Bill kindly offered to send a RoadRunner/Eagle to compare to the SDS.

Here are Bill’s thoughts on speed stability: “You do not always need perfect pitch to detect a difference when the speed is not exact. Small changes in pitch alter the phase relationships and the harmonics of the music can create changes in the sound stage and imaging much in the same way as speakers whose drivers are not time aligned can affect the presentation. We have had users report noticeable changes with errors as small as 0.2-0.3 RPM.”

Where the installation of the SDS was just a matter of plugging the turntable into the SDS and the SDS into wall power, the RoadRunner/Eagle set up was more involved. A very small magnet is attached to the underside of the turntable platter with a peel-off self-stick adhesive. Then a small circuit board, with a Hall-effect sensor which reads the passing the magnet, is affixed to the turntable plinth in a similar manner. Then the RoadRunner and Eagle are installed in convenient locations and everything is wired together. The instructions are clear and all cables are provided. The total installation time was around 30 minutes and is not difficult nor does it require any knowledge of electronics. 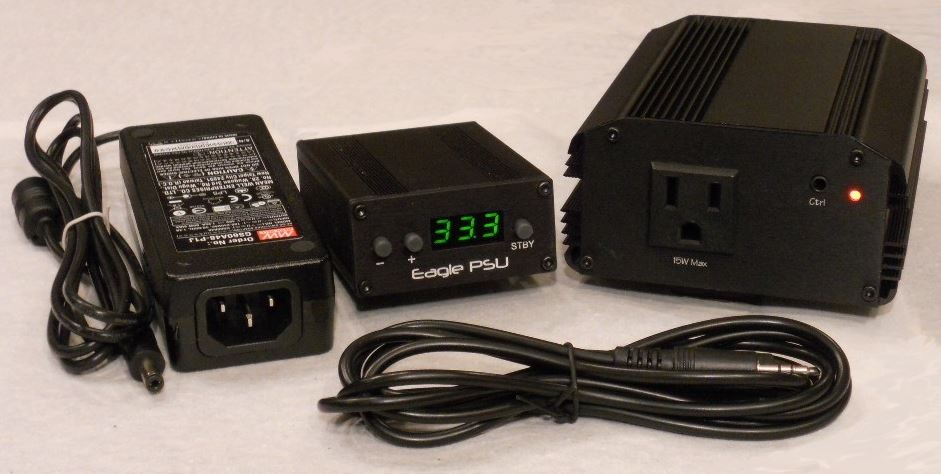 Day to day operation of the Phoenix Engineering precision motor controller system is simple. The user just pushes a button on the front of the Eagle controller and the platter starts turning. From the owner’s manual: “(t)he Eagle PSU starts the platter at ~25RPM and evenly ramps up the speed to prevent “burn out” on the belt. This greatly extends the belt life and improves long term speed stability.”

The VPI SDS senses a motor start and ramps up the voltage. After a few seconds, it decreases the voltage going to the turntable motor to 95 Volts while keeping frequency, which determines the RPM speed of synchronous motors, steady. There is a fine frequency adjustment on the front of the SDS, which can calibrate the true speed to less than 0.1% error.

The RoadRunner/Eagle has several possible adjustments, such as motor voltage, speed offset, and pulley select, but the RoadRunner/Eagle is really plug and play. The small size of the “head” units, with their digital readouts, enables them to be placed near or under the turntable for easy access.

Using the 1 KHz test tone on the Cardas Test and Burn-in LP, and the Audio Control “Mobile Tools” app on my iPad Retina Mini, along with the inexpensive Dayton Audio iMM-6 calibrated measurement microphone, I measured the short term (1 minute) and long term (10 minutes) speed stability of both the VPI SDS and Phoenix Engineering RoadRunner/Eagle controllers. Also, by disconnecting the control cable that usually connects the RoadRunner tach and Eagle power supply, the RoadRunner provided a very accurate monitor of the turntable speed separate from the frequency reading from the iPad app.

Both products provide more stable, consistent speeds after warming up. The SDS takes about 20-30 minutes for the speed variations to reach the minimum, where the RoadRunner/Eagle stabilizes in just a couple of minutes. This much faster settling time is possibly due to the feedback of actual platter speed that the Eagle power supply receives once per revolution from the RoadRunner tachometer.

Using the RoadRunner tach and with the VPI Aries plugged directly into the PS Audio Dectet conditioner without either the VPI SDS or Phoenix Engineering RoadRunner/Eagle controllers, the speed varied from 33.635 RPM to 33.650 RPM, indicating an “unassisted” speed accuracy from 99% to 99.1%, with a worst case error of +.35 RPM, or 1%. People with perfect pitch hearing would notice this error. Although the speed of the table was never 33.3 RPM, the speed stability of the VPI table was 99.95%. These results were observed on a Saturday mid-afternoon in January, and were completely dependent on the quality and stability of power from the power company. 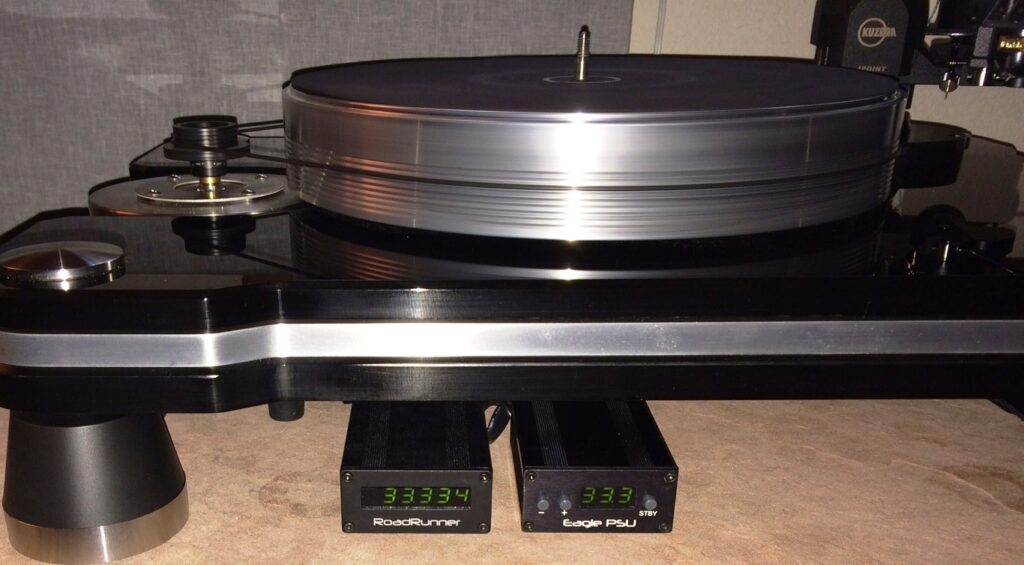 Again using the RoadRunner tach, the VPI SDS was found to provide speed stability of 99.7%, with the speed varying between 33.25 and 33.35 RPM. The RoadRunner/Eagle offers a speed stability of 99.97%, with speeds between 33.33 and 33.337 RPM. The speed was usually 33.333 +/- 0.002 RPM. With either product, the rate of change of the speed was very slow, usually changing 0.002 RPM or less over a 30 second period. The absolute speed error was within 0.1%, or one-tenth the error of the turntable without either speed controller. There was never a sense of any warbling or wow and flutter or changing sonic character from either the RoadRunner/Eagle or the SDS.

Keep in mind that these results were obtained with the VPI Aries 3D turntable which has the 20 pound Classic aluminum platter. We might expect that the relative sonic improvements to be even greater when using either motor controller with a turntable that has a less massive platter. Galileo laid the groundwork and Newton’s First Law of Inertia addresses this.

For $759, the RoadRunner/Eagle offers slightly more consistent speed control than the VPI SDS, although – even with extraordinary effort – there was no discernable audible difference between it and the SDS. As with any power product, the effectiveness in your system depends on your wall power. If you have clean, rock-steady 60 Hz power, or 50 Hz in other locations, you might gain very little improvement from a turntable speed controller. I was surprised at the level of audible improvements these products offer and consider either one to be a required accessory to get the best performance possible from a compatible turntable.

The Phoenix Engineering RoadRunner/Eagle precision motor controller system is a good value which offers real time speed monitoring with a very noticeable sonic upgrade, and I bought it. The VPI SDS provides a very worthwhile upgrade for any synchronous motor turntable and is highly recommended.

The 10 Audio “10 LP Award” is hereby awarded to both units under review. Full information and owner’s manuals are available on their Web sites below.