I do not recall ever listening to a component where the concept of diminishing returns was such a recurring theme. Diminishing returns is an economic principle that says where a basic function can be served at relatively low cost, small incremental improvements are gained at disproportional cost increases. In other words, it can cost a lot more for just a little improvement. More than once during the audition, I was ready to keep the Underwood HiFi modified PS Audio GCPH phono preamplifier as a long-term reference. 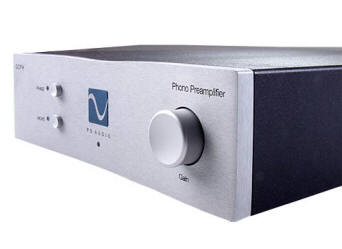 Underwood HiFi did not presume to embark on marketing a product upgrade without consulting with one of the oldest and best-known manufacturers/modification houses in the business. Parts Connexion designed the modifications and performs the actual work. Underwood HiFi is the exclusive distributor. Ex-Sonic Frontiers founder and technical guru Chris Johnson runs Parts Connexion, so you know the work and the parts are excellent. The fact that PS Audio supports the original warranty on modified units is proof of the quality of the modification. The mod includes better parts in certain locations, better RCA connectors, and cabinet dampening. The GCPH, either stock or modified, is a very well made and finished product. It is solidly built and surprisingly heavy for its size. If I could change something, I would reduce the brightness of the blue power-on LED. In my system, where I look at the components, I found the LED to be occasionally distracting.

Walter Liederman at Underwood HiFi recommended 250 hours break-in for the modded GCPH. I used a reverse-RIAA box and ran my Richard Modafferi-modified McIntosh MR-78 tuner into the GCPH for about 300 hours before connecting it to the turntable. The reverse-RIAA box is very helpful in breaking in phono stages except in the rare instance when there is both a new phono cartridge and a new phono stage to break-in. The rear switches of the GCPH allow quick and easy changes of cartridge loading and preamplifier gain. It only takes a few minutes to find the best settings for your cartridge and system.

Large sonic defects can show up in the first minute of listening, but it is usually somewhere between hour number two and hour number three that smaller problems become not only noticeable but bothersome. So the first hour of listening goes by and I am tapping my foot and enjoying the music. Then the second hour. Then the third hour. And this goes on for two-plus weeks and the sound is sweet, dynamic, clear, detailed and very enjoyable. Significantly, I felt no desire to switch back to the reference CJ phono stage during this “get-acquainted” period.

And now a word or two about the step-up transformers. While reviewing the GCPH, I used the Jensen step up, which I built using their excellent JT-44K-DX transformers, and also the Rothwell MC Step up. I also tried the GCPH mod sans external step up. Long-term readers of this site probably know that I am a fan of Jensen transformers. I used them in a tube preamp a few years ago, added them to my current CJ Premier 15 phono stage, and recently built an outboard step up transformer box with Jensen transformers. I’m not here to sell you transformers – or anything else, for that matter – or to compare Jensens to every other model of transformer on the planet. If you are interested, check the specs and you’ll see the very wide bandwidth, low phase shift, and low distortion of both the -347 and more economical -44 units. Besides specs, I have always appreciated the support provided by Jensen employees. If the -44 based step-up was a commercial product, it would probably carry a list price of about $1500. I mention this for perspective on the comparison with the $430 Rothwell Transformer, which was very kindly provided for the audition by Peter Wolber, the distributor. 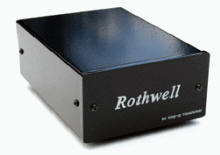 The Rothwell Step-up was very close to my “Jensen 44” in almost every area. There was equivalent depth of tone and richness without any sense of grain or distortion. Soundstaging was very good with a convincing sense of width and depth. Bass was also very good, with just a slight decrease in the apparent level of detail. This was most apparent when listening to an acoustic bass: the ability to hear individual strings vibrating was better with the Jensen unit.

The main difference, which after looking at the specs could be expected, is in the upper treble. The Jensens have a bandwidth of 2Hz to 180kHz, while the Rothwell is specd at 5 to 36kHz. Even though 36kHz is higher than I can hear, and by a large margin, the apparent effect is to give the Rothwell unit less air and extension in the upper treble. This was noticed both in comparison to the GCPH without any transformers or in A-B comparisons to the Jensen.

It should be noted that the Rothwell Step-up has an equivalent input impedance spec of 100 Ohms. In my experience, this suggests that the cartridge should have a coil resistance of less than 10 ohms, with 5 Ohms being an ideal value. All three cartridges that were used in this review have their coil resistances between 20 and 40 Ohms and prefer loadings around 500 to 1000 Ohms. If you load an MC cartridge down to a lower value, it would sound muffled, rolled-off, or otherwise reticent in the high frequencies. The Jensen unit is designed to comfortably handle cartridges with coil DCR up to 45 ohms. Whether actual or system dependent, this character is not a quality issue. The main purpose of the Rothwell Step-up is to add 22 dB of quiet gain. It performs this function very well. 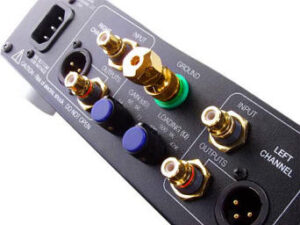 Back to the GCPH-mod. It sounds excellent. Compared to the CJ Premier 15 Series 2, there was more detail in the bass with the PS Audio although very slightly less very-deep bass. This is just in comparison and no lack of deep bass power or extension was noted when listening to the PS Audio long-term. Overall, the GCPH’s bass was either dryer or better focused, depending upon your point of view. The GCPH-mod has greater midrange detail and resolution where the CJ seems to smooth over this range just a bit. Voices are very enjoyable through either unit, and the CJ offers a slightly better sense of individual singers in their individual places on the stage. The difference is not that great, however.

Lateral soundstaging was a bit more precise with the GCPH-mod, although depth and hall size, especially noticeable with naturally recorded symphonic music, has a greater feeling of the recording venue with the tubed CJ. The deciding factor for this reviewer in retaining the CJ as the long-term reference was its greater purity in the upper midrange and absolutely grain-free treble. This was more of an issue when using the copper Condor, which can be a bit hot in the treble with some older LPs. The GCPH-mod is competitive in most areas with the four-times more expensive reference, and it required a lot of listening to make the final decision. In another system, the Underwood/PS Audio may have taken the final prize.

The GCPH-mod bettered the stock GCPH with the improvements advertised by Underwood HiFi. I have included those qualities where I felt the modification added a noticeable improvement (quoted):

The GCPH has a volume control, as you can see in the image above. There are also front panel push-button switches for Mono and Phase which are worthwhile features. I preferred to use the Placette to control the volume only because of its remote control. In the owners manual, the GCPH’s volume control is not recommended for use above about the 3:00 position, so ultimate gain, although adequate in my system without extra gain from the step-up transformers, may be an issue without additional gain from an active preamp. Of course, this is dependent on the cartridge’s output, the gain of your amplifier, the efficiency of your speakers, the size of your room, and finally, how LOUD you listen.

The stock GCPH is a good sounding unit at its price of just under $1k, but the Underwood HiFi mod is significant. It is seriously recommended for the wonderful sound it provides. Notice that I did not say “…wonderful sound it provides for the money”. The Underwood HiFi modification moves the GCPH definitively into high end territory and makes the unit competitive with other phono preamplifiers in the $3000-5000 range. That is saying a lot for a component that sells for a very reasonable $1350. I would easily choose the Underwood-GCPH over the ARC PH5 ($2000) or Art Audio Vinyl 1 (~$3000). On a performance-price basis, the Underwood HiFi-GCPH is the biggest bargain I know of in audio. Try it. You may find that the price of admission to true high-end LP playback has became affordable.