The new PS Audio Stellar S300 stereo amplifier is a delightful surprise. At a list price of only $1,499, the sound of the Stellar S300 has characteristics of some of the best amplifiers available, at any price.

PS Audio, located in beautiful Boulder, Colorado, has been making well received components for many years, several of which have been reviewed here on 10 Audio. PS Audio invented and manufactured advanced power purification products such as the groundbreaking Power Plant AC regenerators, and the Power Port AC receptacles were the first audiophile application of that product category. They make a full range of products, which include more conventional Class A/AB power amplifiers and the latest Class D output in the Stellar series of amplifiers.

Unique to the 27 pound stereo Stellar S300, which is rated at 140 Watts per channel, and to the 350 Watt mono Stellar M700 is PS Audio’s exclusive Analog Cell input stage. The Analog Cell features Class A operation of MOSFET devices and is designed specifically for this application to work well with the latest ICEPower 300ASC amplifier modules. There is a special synergy happening here which this audiophile had not observed in earlier ICEPower-based amplifiers. Those sounded dull and lifeless. Not so with this Stellar amplifier.

Class D amplifiers are known for being very “fuel efficient” and not wasting electricity by turning it into heat instead of sound. The amplifier always runs cool, just a few degrees above room temperature. At high power output volume settings, the measured power efficiency was around 70-75%. Compare that to conventional power amplifiers which can be around 5%, meaning that for every 100 Watts consumed from your wall outlet, they output 5 Watts to your speakers. There is a wide range for this measure among different amplifiers.

I had been listening to the wonderful purity and composure of the Cary CAD-805AE single-ended tube amplifier for 6 months. And loving it! It was a complete surprise when I plugged in a brand new, “raw” Stellar S300 and didn’t cringe and run from the room from the sound of this new amplifier. On the contrary, while the characteristic jagged edges we hear in the sound of most new components were apparent, the Stellar’s out of the box sound was far from offensive. I let it cook for 300 hours, playing a tuner at a level that warmed up the 10 Watt load resistors which are used for just these occasions. The hard edge that plagued the sound for the first 20 hours had largely departed by the age of 100 hours, and were completely absent at 300 hours.

The S300 delivers outstanding separation of performers on a very wide and nicely deep sound stage. This sound staging precision is present at any tolerable volume level. While the depth of that apparent stage is somewhat less than that offered by the vacuum tube Cary amp, the stage is far from a flat, 2D image. The layering of performers on classical music recordings is very apparent and stable. The amplifier really shines on complex music by presenting individual instruments and voices with easy to follow clarity. A very good sound stage naturally follows. This clarity and easy separation of complex music is a trait shared by the single-ended solid state First Watt J2. 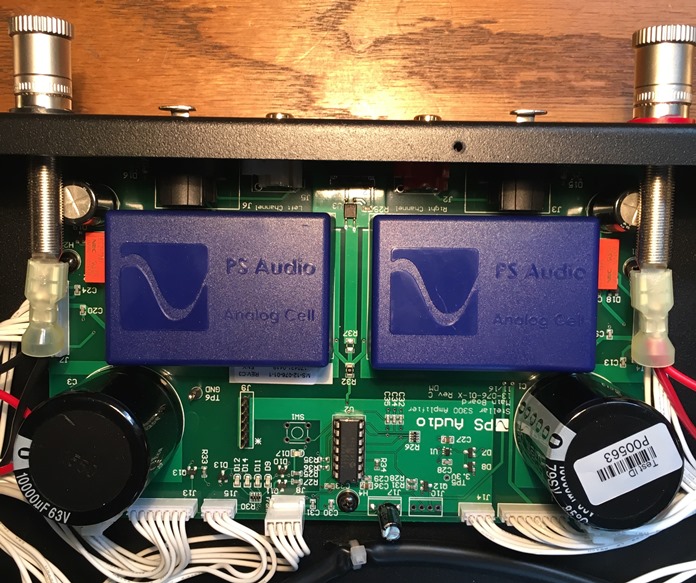 The sound is agile, changing however the music requires, instantly. If the recording is bright and forward, so sounds the S300. If the recording is dark and rolled off, the Stellar amplifier sounds just like the recording, adding nothing. There is no haze or hangover of fast attack sounds which start and end with sunning speed. The S300 never sounds like it is straining to keep up with complex music, soft or loud.

I prefer the 211 power tubes in the Cary amp, and the bass character of the tubed amp is better defined allowing one to hear the vibration of individual strings just a bit better. The PS Audio amplifier, in a credible “tit for tat”, goes deeper into the lowest bass and is more powerfully dynamic. The $5,500 Class A Pass XA30.8 amplifier offers tighter bass with greater resolution. The bottom line is that the S300’s bass is satisfying and enjoyable, offering great dynamic power which reaches into the lowest bass notes, with sufficient detail to not often feel that something is missing.

Again, using the 211 tube amp for comparison, the Stellar’s relatively leaner upper midrange has less richness and grip of voices; however, there is an audible benefit to the S300’s presentation. Words are more understandable. This worthwhile characteristic provides a bit more clarity to complex musical lines which contributes to an excellent overall performance.

On Fleetwood Mac’s “Caroline”, on the Tango in The Night LP, the electronic jam in the last half of the song has obvious overload which carries a steely and grating edge to the sound. The duration and intensity of this distortion is somewhat less than heard from the Pass XA30.8 or Bryston 2.5B3, but is still very audible. The Stellar S300, like these other amplifiers, allows the actual music to emerge from the speakers with great clarity and the ability to mentally separate the distortion from the music.

Just when you think you understand this amplifier’s character and abilities, it will surprise you by revealing some unknown nuance of a vocal or instrument that you have not heard before. This welcome ability results from the amplifier’s very high signal to noise ratio that continually offers extremely “black”, silent backgrounds.

The Stellar S300 amplifier has numerous strengths, but the most obvious is the purity of the entire treble range. Here we enjoy a freedom from harshness, a continuousness, a depth of tone that is similar to that found in the Cary single-ended tube amp. The tube amp digs a bit deeper into the lowest levels of resolution, but the easy on the ears treble range of the PS Audio amp is a pleasure to hear. (I wonder if raising the amplifier’s cut off frequency from 50 kHz to 100 kHz might provide another small fraction of a degree of higher resolution in the upper treble.) 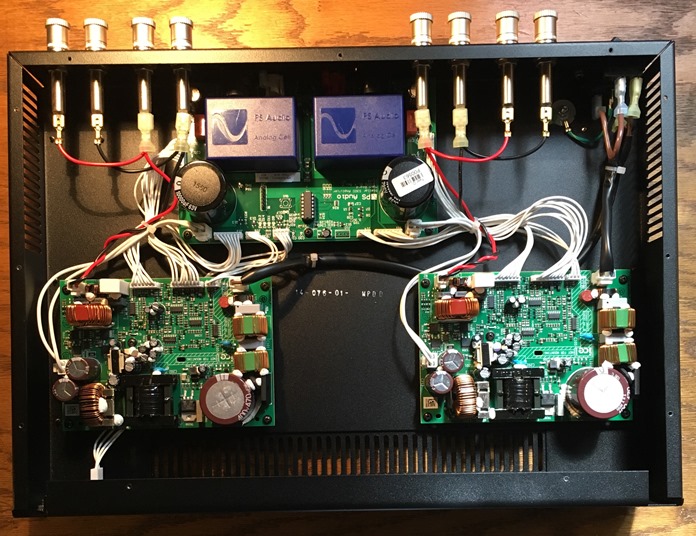 After the initial break in, I listened to the S300 on a daily basis for about three weeks without feeling a compelling urge to reinstall one of the other available amplifiers. Instead of feeling deprived of some level of ultimate harmonic detail lying next to utter silence, the sound of the Stellar S300 draws the listener into very enjoyable performances. I have heard individual vacuum tubes that sound less agreeable than this entire amplifier sounds, which is very close to that lovely single-ended purity. Let’s face it, a push-pull design is not optimal. Mother Nature is not push-pull. She’s single-ended all the way, baby!

Folks, this is the future. We have heard vast improvements of Class D amplifiers during the last 10 years, and we are at or near the point where the technology is largely irrelevant to the final sound. The sound of audio components is more dependent on the implementation than on the underlying technology. The PS Audio Stellar S300 gets so close to perfection that the low purchase price is an out-of-this-world value. The PS Audio Stellar S300 adds nothing objectionable while delivering wonderful musical performances.