I’m speechless. Or wordless. I had quite a lot to say about the new Response Audio Bella EXtreme 100 mono tube amplifiers during the first 400 hours of use while the Teflon® capacitors and other parts were slowly breaking in. Let me tell you a little about the amps themselves, and in the mean time, I’ll try to think of something to say about the way they sound now.

Response Audio is one of the most multi-tasking audio companies I know of. The president, Bill Baker, is certainly one busy dude! His company is a brick-and-mortar retail dealer, a well-established modification and upgrade house, and a manufacturer with its own line of electronics: Bella EXtreme. So far, the Bella EXtreme line-up includes three power amplifiers, all tube based. The Bella EXtreme 100 amplifier has its roots as the ultimate upgrade for the Antique Sound Labs Monsoon amplifier, but now the ASL amp has morphed into an entirely different product altogether. Baker knows the potential of the original design having evaluated probably every upgrade path imaginable, and is now the exclusive customer for the China-sourced chassis.

His changes to the original design include reference grade V-Cap Teflon® capacitors with special mounting to “eliminate mechanical vibration as well as radio frequency interference”, Elna Cerafine electrolytics, Mills and Dale/Vishay resistors with vibration treatment, a complete rewiring of the grounding layout which results in a “dead quite background and low noise floor”, Teflon® bypasses for the power supply capacitors, Fairchild® “Ultra Fast – Soft Recovery” diodes, better wire, a 9/16” (14.5mm) thick “Response Audio” faceplate, and 14 hours of testing and burn in. Many of the changes are parts upgrades, but there are a few changes to the circuitry itself that are proprietary information. Bill also installed the extra-cost Bybee filters in these particular units. The warranty is 5-years non-transferable, which is unusually generous for a tube unit. (From a business perspective, the only justification for offering a longer than average warranty is that you are confident the unit will not break.) The introductory price for a pair is $7,995.00. 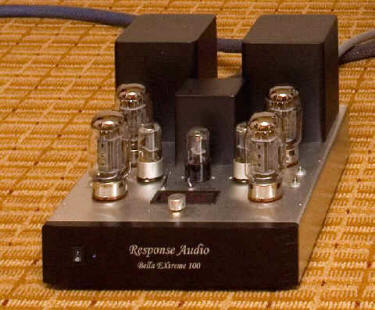 The amplifiers under review were originally ASL Monsoons. The Monsoons were decent amplifiers, but suffered from a coarse and forward upper midrange, among other sonic faults. A coarse or harsh sound – especially in a tube product – is often a parts quality issue, so I contacted Response Audio. After talking with Baker, I decided to send the amplifiers to him for “the full Monty”. Baker first gutted the chassis and then performed his magic. They are now fully representative of the current Bella EXtreme 100 amplifiers. I would like to take this opportunity to publicly thank Bill for his kind support and the ease with which the upgrade process proceeded. There were several discussions about the upgrades, options, and other possible changes. Bill was always a pleasure to talk with, generous with his time, and tolerant of my ignorance. Thanks again, Bill!

I feel that while it is valuable to know how any tube product sounds with the stock tubes, we all realize that tubes have a limited life expectancy. When replacement is required, we often install tubes that are different than the original parts. My final choices of tubes were cryo Valve Art KT88 and NOS RCA red-base 5691 and 5692. However, please note that the discussion below is with stock tubes. The built-in bias meters and easily accessible bias adjustment potentiometers make it a very quick and easy task to maintain these settings. Some amplifiers, ARC comes to mind, often hide these necessary features on the rear panel where they are difficult to reach. The physical design of the Bella EXtreme amplifiers is very user-friendly.

Now for the hard part. My continuing audio journey includes amplifiers that almost always have one or more particular strengths. Probably the most important is the ability to energize the air with realistic, life-like sound. This character includes seemingly total resolution of the musical source, stunning macro-dynamics, amazing micro-dynamics, and – if those weren’t enough – complete believability. The sad fact is that almost every good amplifier can “energize the air” at certain frequencies, but not throughout the entire audio spectrum. The result is that we perceive a great midrange, or bass, or treble, that provides an incomplete and, therefore, short-lived enjoyment of our systems. The end result? Upgradeitis – the continuing quest for perfection.

I am listening to the cure for this common and expensive affliction. The Bella EXtreme 100 amplifiers consistently provide the highest level of musical communication and immersion I have ever experienced from an amplifier. This is NOT limited to certain frequencies. It is not restricted to analog, not to certain cables, and not to a particular time of day or to a certain beverage. Every time I sit down, whether it is for one cut or for several hours, there is a feeling of absolute communion with the music. The music is scary-real, delightful, exciting, and relaxing – yes, all of these. And most importantly, it is always enjoyable. Try as I might to find an alternative, the conclusion I consistently have about these amplifiers is that they are much closer to perfection than any other amplifier in my experience. In fact, I find them faultless.

Now for the modifiers to the last sentence.
1. Compared to the 500 watt per channel solid state Cary 500MB amplifiers, the bass has a bit less dynamic slam.
2. There is no number 2.

There is excellent headroom, and even when the volume is unusually loud, the sense of compression on peaks is very low. But the very interesting thing about these amplifiers is that because they are so even-handed in their presentation from low bass to highest treble and have ultra-high resolution of the entire audio frequency range, I find don’t need to listen as loudly to get that energized sensation. It seems that with other amps, turning up the volume was often an attempt to hear a fully energized sound at all frequencies, but the Bella Extremes provide this deeply involving quality at every volume level and it is not necessary to “crank it” to force the sound to be enjoyable. I still like it loud, but “loud” and “good” are no longer interdependent. The volume range for enjoyable music is now much larger than with other amps. I can listen at a lower volume and still enjoy the music, or at a louder than normal volume with no sense of strain or personal overload. Possibly this is the reason some systems sound their best at one particular volume level.

Let me elaborate a bit on this idea of “energize the air”. The main requirement of this character is that the sound is fully developed and complete. There is literally a vibration to the air, such as we get from any well recorded string instrument. You can get this at high volume levels. It is a character of sound that is natural and the opposite of thin, bright, warm, bloated, forward, or any other common audio jargon or descriptor. It is not dependent on similar performance from adjacent frequencies, but octave-to-octave consistency is required for long term satisfaction. It is ultra-high resolution and perfectly neutral. It is just plain “real” sounding: rich, vibrant, alive. There is no denying it when present, no mistaking it for distortion or any other effect or artifact, and after you have it, no longer optional!

Since this is a review, I’ll include the obligatory observations regarding sound staging for those of us who value this quality in our systems. Like I do. In fact, I think realistic sound staging – the illusion of performers occupying defined, 3-dimensional space – is a basic requirement for a good sound system. (Note: I am not obsessed with huge apparent stages. A reasonable sense of depth along with well-delineated left-to-right images will satisfy my requirements.) Without it, I never believe I am listening to anything other than a recording. Without it, enjoyment suffers. The Bella EXtreme amps present defined space at least as well as any other amplifier I can recall. On one recording, there was even a stable image to the outside of the left speaker. Listening to most studio recordings with other amps, when a solo singer overdubs her performance with backing vocals, there is rarely a significant spatial separation between the lead and backing vocals and they tend to blend together. The seemingly limitless resolution of the Response Audio amplifiers keeps these separate but similar tracks distinct, making it much easier to hear the intended mix of the lone singer’s voice. The outstanding sound staging ability of these amplifiers also helps to isolate the separate vocal dubs with the help of the slight pan errors (or deliberate mix down) in the recording.

Background noise is effectively absent. They are not just “good for tube amps”; they are just plain quiet. No excuses needed. These amplifiers are quiet enough to hear the very, very small differences in the self-noise of the three preamps used during this evaluation. Of course, there is no noise from the Placette Passive Line Stage, and the Dodd Battery-Powered Preamplifier is very close behind, with the Placette Active coming in a not-too-distant third. The s/n spec is 90dB, which is better than almost anything analog and even many preamps. Whatever the number is, in a real-world system, it is enough.

Speaking of specs, there are two specific specs I should mention that will be of special interest to those of you who have or are speculating about using a passive preamp in your systems. The input sensitivity is 1 Volt and the input impedance is 100,000 Ohms. These specs make the Bella EXtreme 100 amplifiers especially compatible with passive preamps, such as my Placette Passive Line Stage. The combination is simply spectacular.

My office is adjacent to the listening room, separated by a doorway. I usually have the system playing while I work. Other amplifiers seldom caused me to pause in my work to listen to music. The music is usually just background sound. With the Bella EXtreme 100s, I frequently find that I have stopped in the middle of some task to enjoy the music from the next room, from a tuner! This is the so-called “LIAR” (listening in another room) test. Grade: PASS!

There have been many amplifiers to transition through my system. Some were reviewed, and some weren’t here long enough or offered enough interest for me to write about on 10 Audio©. With the Bella EXtreme 100 amplifiers, the reference system has been blessed with a significant upgrade. These amplifiers do certain things, important things, which no other amplifier before has had the refinement to provide. They are easily reference class components and, by a significant margin, the most enjoyable amplifiers in my experience. “Bravo” to Bill Baker for this important achievement.