Something very special has happened in the universe of audio components and you can benefit from this important milestone. We are all familiar with terms such as “good for the money” and “sets a new standard at its price point” and “plays above its class” and similar ideas that attempt to compare the sound of a product with its cost. Rogue Audio has introduced the Stereo 100 power amplifier, at $3,495, that offers better performance than anyone has offered up to now – possibly at any price. 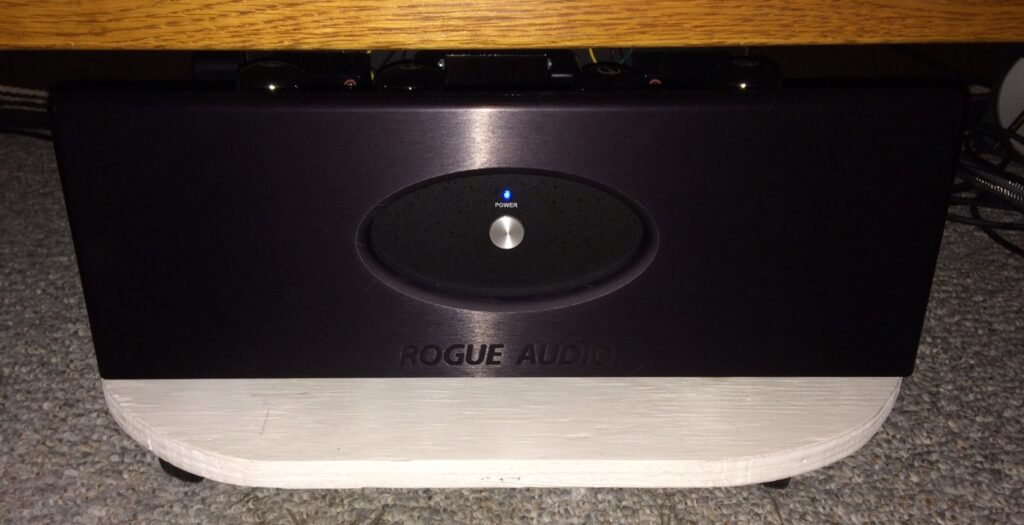 In fact, the Rogue Audio Stereo 100 amplifier sounds better than any amplifier that this listener has ever heard in a controlled environment. This is not the first Rogue Audio component to be reviewed here at 10Audio. The Rogue Ares phono preamplifier also received a very positive review and remained in the review system for an extended period of time.

The 100 Watt per channel Stereo 100 amplifier has both single-ended RCA and balanced XLR inputs. The XLR inputs were used exclusively due to the 5 meter cable run between the preamplifier and amplifier. The speaker binding posts are easy to use and are spaced far enough apart to allow heavy cables to connect without worry of a short circuit. The built-in bias meter helps to set the bias quickly on the four output tubes.  After the first month, where the bias drifted up to 5 mA from the recommended setting of 40 mA, it is off only 1-3 mA a month. Setting the bias on all four of the KT120 output tubes takes a minute or two. Thankfully, the trim pot value is very well chosen to allow the correct bias to be set precisely, without needing to repeatedly “bump” the screwdriver to obtain the recommended setting.

The KT120 is a newer tube based on the venerable KT88. The KT120 is sometimes referred to as a “Supertube”. I have had a couple of KT88 amps over the years and they never sounded quite “right” to me. The KT120 sounds “right”. The amplifier sounds very fine in either Ultralinear mode or Triode mode, and I leave it set for Triode mode due to a bit more natural warmth in the upper frequencies.

The stock JJ small tubes also sound very good. Replacing the 12AX7 input tubes with NOS Mullard tubes made in the 1960s, from Vintage Tube Services, resulted in a bit more warmth and ease in the upper midrange and treble. The difference was smaller than I expected which is a good indication that Mark O’Brien, the proprietor of Rogue Audio, has a good ear and made good choices with his selections of the tubes that he includes with the amplifier. This acute listening skill affects the choices for all of the component parts, too, as well as the final sound of the amplifier.

The amplifier was installed on a rolling cart under the coffee table that sits between the speakers. A 140 mm silent computer fan keeps the air moving over the tubes so that the top surface of the coffee table is barely warm to the touch. The Stereo 100 amplifier draws 208 Watts and 2.2 Amps of current at idle. In contrast, the Class A Pass Labs XA30.8 amplifier draws 280 Watts and 3.2 Amps. The Stereo 100 reached its final break in sound starting at 100 hours of use, and seemed to have completed this necessary chore at 200 hours. If you attempt to judge this amplifier before it has at least 100 hours of use you will hear a light fog that overlays the midrange and treble, muddies the bass, and deflates the sound stage. This sonic garbage slowly fades away. Entirely.

Instead of telling you how this 100 Watt per channel amplifier continues to make me smile, day after day, let me start by sharing how it sounds compared to a couple of the other amplifiers listed above. This seems appropriate because it will relate to the way most of us choose audio products, which is to compare something different to what is already part of our audio systems.

The Acoustic Imagery Atsah Class D mono amplifiers have very slightly better definition in the lowest, deepest bass. This difference required three swaps of amplifiers and specific bass-heavy recordings to identify with certainty. I had been enjoying the excellent Pass Labs XA30.8 amplifier, with a fully Class A output stage, for several months. After the new Rogue Stereo 100 received a complete break in, the Pass amp was reconnected. This experience was shocking and required several swaps between the Rogue and Pass amps to convince this listener that the initial impressions were accurate and reliable. They were. The Rogue Stereo 100 is better sounding in every way with both the Emerald Physics and Focal speakers.  The Magnepan and Scansonic speakers departed for new homes midway through the audition and missed this test. While the Scansonic speakers didn’t sound all that good with any of the amplifiers available, the Magnepan 3.7 sounded great with the Stereo 100.

This is a good point to point out that amplifiers have to be judged in context within the entire audio reproduction chain. Compatible speakers, system components, power needs and the room will all contribute to the final result. YMMV. However, excellent results should not be difficult to achieve in other settings.

The bass is more powerful and has noticeably better detail and resolution than the solid-state Pass amp. This is surprising coming from a vacuum tube amplifier. The midrange of the Rogue amp has greater depth of tone and more richness for both male and female voices. This is expected from a tube amplifier. When we talk about amplifiers that have a Class A output stage, where the output devices are always biased for the maximum output power to avoid some forms of distortion, we talk about the added purity and greater freedom from electronic artifacts. It is common to appreciate the extra clarity of a Class A amplifier, especially after spending some time with a Class AB (very common) amplifier.

Now switch to the Rogue amplifier and be stunned at the large (immediately noticeable) change in the clarity and purity of every sound. Especially in the upper frequencies, this eye-opening jump into virtual reality is truly incredible at first. The analogy of “cleaning the dirty window” only begins to describe the extreme transparency of this power amplifier. Performers have a three dimensional quality that elevates the perception that the performers are full size, living, breathing sources of sound. The natural and very long lasting fade-out of cymbal taps and the shimmering metal is an excellent indication that high frequency resolution is superb. Long harmonic trails and fade-outs don’t lose clarity and become obscure. They just get quieter. Many amps can’t manage this.

More important than any absolute measure of resolution is how constant that resolution is from the low bass to the uppermost treble. Alone among all the sources noted above, the Clearaudio Titanium V2 phono cartridge, $8,000, displayed a character that seemed to change as the frequencies rose from the midrange to mid-treble. As the frequencies increased, the tone became somewhat thinner and less rich. This difference from octave to octave became apparent in the first listening session. Changing to any of the other cartridges on hand, or to digital, eliminated this aberration. The Miyajima Madake, ZYX UNIverse II and Lyra Atlas cartridges all have a wonderfully consistent character across the audio frequency spectrum that the Rogue amplifier delivered in full and captivating glory.

The ability of this amplifier to go from very soft to very loud in an instant is jaw-dropping. This dynamic excellence promotes more engagement with the music because it mimics nature in this regard. Intantaneous drum rimshots happen and then end. There is no smear. This increases resolution by not blurring the small details. The amplifier sounds very fast, but also wonderfully rich and developed.

Listening to “Barbados” on Poco’s Legend LP from Mobile Fidelity Sound Lab, the wind and surf sounds were so lifelike and near that I could almost feel the salt spray from the ocean. Basia’s “Time and Tide”, from her Time and Tide LP, revealed her rich and expressive vocals in a truly satisfying performance. Frank Sinatra’s voice is mesmerizing on nearly every cut of the MFSL Sinatra’s Sinatra LP. And for a fun treat, the bass vocals on Yello’s “Oh Yeah” on the Stella LP will surely make you smile. 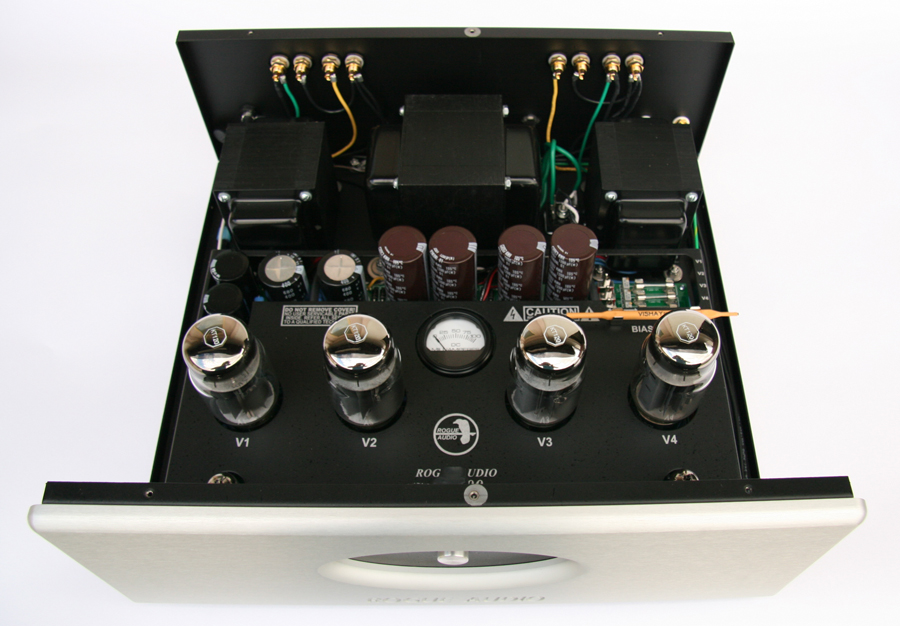 The Stereo 100 allows more of every note to pass through. Fully formed tones, with their unusually high and seemingly complete resolution down to the tiniest, quietest detail, communicates the most subtle inflection, mood or meaning of every performance and voice. There is, literally, more music coming out of the speakers.

There are two other apparently similar amplifiers currently available: the Audio Research Reference 75SE, $10,000, which comes with KT150 power tubes, and the VAC Phi 170, $9,900, which includes KT88 tubes but can use KT120 or KT150s. I have heard neither amp, but continue to be so happy with the sound of the Rogue Stereo 100 that my curiosity about these 3x more expensive products is quite muted.

A few years ago, when I was content with the sound of my newly all solid-state stereo system, I thought that vacuum tubes were an old, dead, technology. However, after living with and thoroughly enjoying better sound than before the Stereo 100 arrived, it seems that tubes are, again, part of my audio life. The Rogue amp has been completely reliable, with nary a hiccup in operation to draw any concern about the long term reliability. Even so, since I go nuts (figuratively) when the stereo is down for maintenance, I purchased spare tubes from Rogue: one JJ 12AU7, one JJ 12AX7, and one Tung-Sol KT120, just to have on hand.

In the process of writing, I re-read my reviews many times. This one sounds like paid advertising copy. I assure you, it is not. This is a very fine amplifier that deserves your attention. You be the judge.

The Rogue Audio Stereo 100 power amplifier is a GREAT product. I have heard no other amp under $15,000 that has comparable levels of control, clarity and consistency of tone. It was a pleasure working with Mark O’Brien and Rogue Audio on this review, and I look forward to listening to music every day with this fine amplifier in my system. Of course I purchased the review sample. It was one of the easiest buying decisions in my seemingly endless quest for great sound.