Roksan, the British company, has been around for over two decades. Incorporated at the dawn of the digital era, they’ve done quite well in the world of analog. Their Xerxes and TMS turntables are recognized as classics by lovers of vinyl. (They even have a Wikipedia entry.) The problem is: what if you want good sound for your record collection but don’t have the deep pockets for rigs like these?

Comes the Radius V, Roksan’s entry level ‘table with their Nima arm thrown in for good measure. For well south of $two grand, Roksan has taken into account some of the 21st century’s trends in vinyl playback (improved platter materials and circuit board cable to wire the arm) to produce a nice machine indeed. The Radius also uses the circular turntable design that’s become typical on many models since Wilson Benesch introduced it ten years ago. This approach saves materials and creates a lovely, streamlined look, whether you purchase a unit in the more expensive acrylic or less costly lacquered wood finishes. The motor sits on a small ear that juts out from the subplatter. This design helps isolate vibration and hum from cartridges like my Grado that are sensitive to interference from motors directly under the platter, such as the ubiquitous Rega’s. RCA cables are dedicated, though it’s a simple matter to upgrade arms (and interconnects) to a higher level Roksan arm or another brand — if that’s your cup of tea. 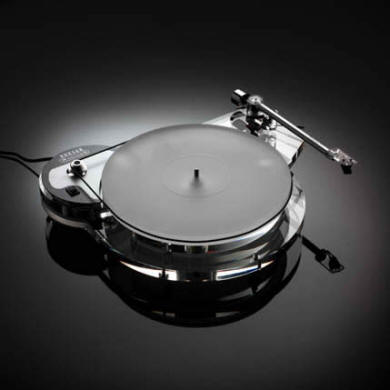 But maybe you don’t need that arm upgrade. The Nima, which comes packaged with the “Roksy”, is a well-designed piece. It is a medium-mass unipivot tonearm of aluminum alloy with an acrylic headshell and the same internal wiring found in the $2,400 Artemiz arm. Setting up the Nima is simple, and you have the ability to tinker with azimuth, VTF and VTA, adjustments which are rare in this price range. Though the Radius V was clearly produced for a price-point, nowhere do you get the feeling that the boys from Britain skimped on this deck or arm: no street corner fish and chips here. The ‘table looks the business.

On to the sound. I’ve been lucky to have a number of turntables in-house for extended listening during the last year or so, specifically: the VPI Scout with JMW-9 arm and the Rega P3 with their popular RB300 arm. The Scout retails for around the same change as the Roksan, and, let’s not mince words, is much better constructed than the British ‘table. The American VPI simply seems overbuilt – solid and strong. On the other hand, the Rega P3 sells for less than the Radius V, and – all hail analog guru and company founder Roy Gandy – is nevertheless not as substantial as the other two units. (The fantastic Rega RB300 arm aside.) That said, the Rega ‘table is often considered an entry level giant-killer, so we’ll stack it up against the Roksan. Build quality aside, the sound is the most important consideration and this is were things get very interesting.

Running a medium output 1.5mv (yes, John G. makes one, recently introduced) Grado Sonata – but also listening with the Dynavector 10X5 and Clearaudio Aurum Beta S wood body cartridges – I’m seriously impressed with the Roksan Radius V relative to these other vinyl spinners. First, the Roksan is organic in the best sense of the word. Music always sounds like music on this ‘table: it flows naturally and gracefully. (If only digital could match this feeling of continuousness.) The Radius picks up a bass line and moves it along effortlessly without throwing it in your face, never losing the sense of pace and rhythm for which many British players are noted.

As you all know, a hallmark of good audio gear is low listener fatigue. With the “Roksy”, I invariably find myself listening longer and more intently. No running to the kitchen to make a sandwich when vinyl is whirling on this unit. To my ears, the VPI is drier, more accurate. Compared to the Roksan, the American ‘table has greater solidity to the images. For some people, this dimensionality passes for warmth, in the midrange in particular. But where I think the Roksan is superior is in the sheer humanness of its sound. Try Mark Knopfler’s new LP, Shangri La, and play “5:15 am”. The effect of this song is magnificently rendered through the Radius V in comparison to the other ‘tables. The emotional connection to the music is deeper on this turntable across all genres of compositions.

Put differently, close listening between the units shows the Radius to have more soul. The VPI just doesn’t draw me into the music as deeply. The Scout is a unit that impresses you while trying to please you. It makes you more aware of the hifi artifacts of record reproduction for better and for worse. (You think about the sound more than you enjoy the music at times with it). The Rega, conversely, shares many of the positive elements of its British brethren – pace and timing in particular – but has a muddier and more opaque perspective, like listening through a window and wanting to reach for the glass cleaner. (Perhaps the motor under the platter)? The Rega doesn’t propel the music along with the joy the Radius does, especially with a good cartridge like the Grado. I’ve always admired the P3 but it’s not as gripping and dynamic as the Roksan. I’d love to hear the V with an expensive moving coil and see if it would be outclassed in the company of a better cartridge. My sense is that between the Nima arm and deck, it would keep up. (Your mileage may vary).

And this all means? The Radius sounds balanced. You want detail, you get it, but in an unforced manner. In the time I’ve been editing this review, I’ve spun a Locatelli Concerto on an old Vox set; Live at Montreux from a great Windham Hill collection; and a pristine copy of Dylan’s Freewheelin’on Sundazed vinyl. In all honesty, it has been difficult at times to concentrate on the task at hand. The music on this little guy just keeps tugging at the ears. The Roksan has a big sound that seems to belie its size and good but not bulletproof construction. Images are very three-dimensional and create a greater illusion of – holy cow – there’s Coltrane and Armstrong! If you love your LP collection, this rig will not disappoint.

There is not much higher praise I can give it than that. With so much fantastic new and used vinyl around today, if you’re thinking of taking the plunge, I can’t but believe the Roksan Radius V is a perfect place to begin.